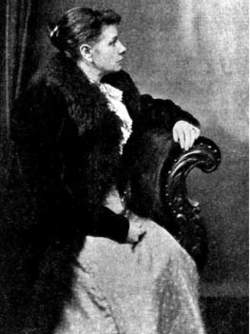 Elizabeth Hope’s earliest friends were ghosts. When she was a small child she lived with her family in an ancient house in England and she saw a number of ghostly figures passing to and fro about the building. Some would smile and nod to her and she would smile back. Her mother did not believe her stories of seeing these people and the family doctor warned of future madness if she kept up what he saw as a pretense.

When Elizabeth was twelve she had to write an essay on “Nature” for school. Try as she might, she was unable to think of anything to write. She worked at it for several days but without result. Eventually, the night before the essay was due, she fell asleep crying at her inability to write. The next morning she was amazed to find the blank paper she had left on her desk was now covered with writing—her own—and it was a long essay on the needed subject. Her teacher was most impressed with the quality of the writing, as was the local rector.

At age nineteen Elizabeth married and became Mrs. Reed. She first encountered Spiritualism around that time and was unimpressed. Even so, she had rapid results with table tipping and, later, with automatic writing. She then became successful at clairvoyance. Through her automatic writing, she began to produce detailed scientific material. One of her many guides, Humnur Stafford, described very minutely an instrument which later proved to be the telephone. T. P. Barkas, a prominent citizen of Newcastle, England, would write out long lists of questions covering every branch of science. In complete darkness Elizabeth read the questions, which had been sealed in an envelope, and gave the answers immediately, sometimes in English, sometimes in German, and sometimes in Latin.

Time was spent in the south of France, where Elizabeth took the name Madame d’Esperance. Then in Sweden, Elizabeth began materializations. Over a period of six weeks she developed the technique with another guide, Walter Tracey. Yolande, a fifteen-year-old Arabic girl, became a frequent materialized visitor. Nandor Fodor said, “It took about ten to fifteen minutes to build up her body from a filmy, cloudy patch which was observed on the floor, while the process of melting away usually took place in two to five minutes, the drapery being the last to disappear in one half to two minutes time … The last and greatest work of Yolande (who often produced apports) was achieved on June 28, 1890, when she apported a seven-foot-high Golden Lily with eleven perfect blossoms. The feat was witnessed by Professors Boutlerof, Fiedler, Aksakof, and others.” Yolande would materialize when Elizabeth was sitting outside the medium’s cabinet, so that both medium and materialized spirit were visible to the sitters at the same time.

At one materialization séance, a sitter grabbed at the figure and, in doing so, caused tremendous harm to the medium. Elizabeth suffered hæmorrhaging of her lungs and a prolonged illness. This was not to be the only time she so suffered. Three times her life was endangered through the willful actions of sitters thinking to catch her in fraud. An incident in 1893 caused Elizabeth’s hair to turn white and indisposed her for two years.

In 1893, at a séance in the home of a Professor E., an Egyptian woman named Nepenthes materialized. At the request of the professor, the materialized figure dipped her hand into a bucket of paraffin wax and then removed it, leaving behind a perfect imprint. It was mentioned that it would normally be impossible to pull out a hand and leave an undamaged mold, but that is what the figure did. Fodor states,

“Nepenthes vanished from their presence as she came, lowered her head on which a diadem shone, little by little became a luminous cloud and gradually faded away. Previous to her disappearance she wrote a message in her own hand in ancient Greek in the pocketbook of one of the sitters. All present were ignorant of ancient Greek letters. The translation read: ‘I am Nepenthes thy friend; when thy soul is oppressed by too much pain, call on me, Nepenthes, and I will come at once to relieve thy trouble.’”

The strangest phenomenon was the partial dematerialization of Elizabeth’s body, from the waist downward. The well known psychic researcher Professor Alexander Aksakof, of St. Petersburg, published a full account of it in his book A Case of Partial Dematerialization (Boston, 1898). Elizabeth herself wrote Shadow Land (London, 1897) and Northern Lights (London, 1900). The former Sir Arthur Conan Doyle ranks it alongside Andrew Jackson Davis‘s book The Magic Staff, saying it is “among the most remarkable psychic autobiographies in our literature.” Elizabeth was virtually imprisoned in France at the outbreak of World War I, and her manuscripts and all her séance notes were destroyed.