(däl`yə, dăl`–) [for Anders Dahl, 1751–89, Swedish botanist and pupil of LinnaeusLinnaeus, Carolus
, 1707–78, Swedish botanist and taxonomist, considered the founder of the binomial system of nomenclature and the originator of modern scientific classification of plants and animals. He studied botany and medicine and taught both at Uppsala.
..... Click the link for more information. ], any plant of the genus Dahlia of the family Asteraceae (asteraster
[Gr.,=star], common name for the Asteraceae (Compositae), the aster family, in North America, name for plants of the genus Aster, sometimes called wild asters, and for a related plant more correctly called China aster (Callistephus chinensis
..... Click the link for more information.  family), tuberous-rooted perennials native to Mexico and Guatemala and widely cultivated in gardens. Most of the several thousand horticultural varieties have been developed from the single species (D. pinnata) of garden dahlia introduced into cultivation in England c.1800, but other species and hybrids, e.g., the cactus dahlia (D. juarezii) are also grown. Dahlias are stout and rather woody plants, some species reaching the stature of small trees, with late-blooming flowers in a wide range of colors and sizes. The tubers of the garden dahlia were one source of fructose, used by diabetics. Dahlias are classified in the division MagnoliophytaMagnoliophyta
, division of the plant kingdom consisting of those organisms commonly called the flowering plants, or angiosperms. The angiosperms have leaves, stems, and roots, and vascular, or conducting, tissue (xylem and phloem).
..... Click the link for more information. , class Magnoliopsida, order Asterales, family Asteraceae.
The Columbia Electronic Encyclopedia™ Copyright © 2013, Columbia University Press. Licensed from Columbia University Press. All rights reserved. www.cc.columbia.edu/cu/cup/ 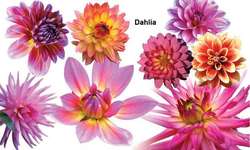 There are so many versions of this amazingly beautiful flower family it’s mind-blowing. Some can grow taller than a person. Related to sunflowers , chrysanthemums, daisies, marigolds, dandelion, Jerusalem Artichokes. Flowers and roots edible. Root (tuber) flavors range from spicy apple to water chestnut or celery root. Some use them in place of potatoes. There are so many varieties, it’s not known if all are edible, but the assumption is that most are. You are on your own here. Dahlia pinnata is definitely edible. Roots contain a natural fructose polymer called Inulin, which helps reduce appetite by slowing the body's metabolism of carbohydrates. A sweet juice is extracted from the dahlia root and cooked at low temperatures to produce a syrup that is 93 percent inulin, a complex carbohydrate that is caloriefree, and a great probiotic food source. Since inulin doesn't stress the pancreas, it’s great for diabetics.
Edible Plant Guide © 2012 Markus Rothkranz
The following article is from The Great Soviet Encyclopedia (1979). It might be outdated or ideologically biased.

a genus of perennial herbaceous plants of the thistle family (Compositae), with thickened, tuberoid roots. The stalk is hollow, 35-200 cm high. The leaves are opposite, pinnate, or triple pinnate. The inflorescence is a calathide and consists of a large number of tubular and Ungulate blossoms, or only ungulate blossoms, extremely varied in color. Approximately 15 wild species are known, distributed in Mexico and Guatemala.

The dahlia appeared in cultivation in Europe at the end of the 18th century. There are more than 8,000 varieties, obtained by hybridization. Garden dahlias are divided into three groups, according to type of inflorescence: single (simple and miniature), with one row of outer Ungulate blossoms (the rest of the blossoms are tubular); semidouble (anemone-like and collar-shaped), with two to three rows of Ungulate blossoms; and double (pompoms, globular dahlias, ornamentals, cactus dahlias, and several others), in which the tubular blossoms are all or almost all transformed into Ungulate ones (barren ones). The dimensions of the inflorescences are 3-35 cm. In ornamental horticulture dahlias are used for individual and group plantings and as cut flowers.

Dahlias are propagated by cuttings, division of tubers, and seeds. Well-lighted areas with fertilized soils are used for dahlia plantings. In order to obtain large flowers, no more than three stems are left on the bush; superfluous shoots are removed as soon as they appear, as are side shoots (shoots in the leaf axils). Care consists of abundant irrigation, frequent cultivation of the soil, feeding, and weeding. Tubers are dug up after autumn frosts for winter storage. The dried tubers are stored in a dry, dark place at a temperature of 4°-5° C in a single layer.

1. any herbaceous perennial plant of the Mexican genus Dahlia, having showy flowers and tuberous roots, esp any horticultural variety derived from D. pinnata: family Asteraceae (composites)
2. the flower or root of any of these plants
Collins Discovery Encyclopedia, 1st edition © HarperCollins Publishers 2005

Feedback
Flashcards & Bookmarks ?
Please log in or register to use Flashcards and Bookmarks. You can also log in with
Flashcards ?
My bookmarks ?
+ Add current page to bookmarks
Mentioned in ?
References in periodicals archive ?
s Dahlia smut presents as pale spots in the early stages and then develops into yellow and finally dark brown spots.
Disastrous dahlias? Here's how to get better results
Black Dahlia Avenger II (2018) is the sequel to the 2003 New York Times Bestseller and Edgar-award winning Black Dahlia Avenger, and it raises the investigative bar from rock solid to beyond a reasonable doubt--the legal requirement for readers to arrive at a finding of GUILTY.
Black Dahlia Avenger III
Halls of Heddon are one of the country's leading dahlia and chrysanthemum nurseries and send out tens of thousands of plants annually across the UK and beyond.
Flower power boosts Sir Bobby's charity; A TRULY BLOOMING FANTASTIC EFFORT
Katie adds: "You could dedicate an area to dahlias as they look fantastic as a crowd.
Make sure your dahlias dazzle
Dahlias begin flowering in early to midsummer and continue until frost, long after many other plants have called it quits for the season.
Dahlias are bold performers in the summer garden
Remy said the P1-million bounty from President Rodrigo Duterte for informants who could provide leads on the arrest of Dahlia still holds.
QCRTC junks bail plea of suspects in car racer's murder
Black Dahlia, Red Rose is a fascinating examination of the case.
DAHLIA, RED ROSE Piu Eatwell; bookclub; with lisa gray Do you have a review of a book or would you like me to review a book you have enjoyed? Please get in touch at lisa.gray@dailyrecord.co.uk
"This year we have added some dazzling new varieties of lilies, gladiolas and dahlias. All are outstanding cut flowers, with long stems and big, beautiful blooms."
Home-Grown Flower Arrangements Made Easy with Spring-Planted Bulbs from Longfield Gardens
Dahlia Pointe is two miles south of the Superstition Freeway inside Loop 202 and is close to free-ways, shopping and dining destinations in the Phoenix metropolitan area.
KB Home declares opening of Dahlia Pointe in Mesa
The parents of slain international race car driver Ferdinand "Enzo" Pastor has offered a P1-million bounty to anyone who could give information on the whereabouts of estranged daughter-in-law Dahlia Oosthuizen Guerrero and her alleged lover, businessman Domingo "Sandy" de Guzman.
P1-M bounty for Enzo slay suspects
The case became known as the Black Dahlia murder, at the time the most infamous unsolved homicide in American history.
Postfeminist noir: brutality and retro aesthetics in The Black Dahlia
In the 1780s, botanists in Mexico sent plant parts to the Royal Gardens in Madrid, where Spanish botanists grew them, then honored them with the name dahlia, after Swedish botanist Andreas Dahl.
Dahlias a love story: she resists! She swoons! She grows obsessed! One writer's unexpected romance with the wacky flower that wooing gardeners all over the West