[′dad·ə tranz′mish·ən]
(communications)
data communications
McGraw-Hill Dictionary of Scientific & Technical Terms, 6E, Copyright © 2003 by The McGraw-Hill Companies, Inc.
The following article is from The Great Soviet Encyclopedia (1979). It might be outdated or ideologically biased.

Data transmission originated in the United States in the early 1950’s. In the early 1960’s it began developing extensively in many other countries as well. Data transmission systems for space flights have been functioning in the USSR since the early 1960’s. In 1965 a data transmission system was put into operation in the Onega automatic control system for checking money remittances. In this system, data are transmitted along telegraph and telephone channels at speeds of 50 and 600 bits/sec, respectively. Data transmission was later incorporated in the Pogoda system for collecting meteorological data and in many automatic control systems in industry and the state administration. Organization of the National Data Transmission System, which will eventually provide data transmission services to all ministries and departments, began in 1972; the first stage of the system to be set up is a telegraph-type network that transmits information at rates of up to 200 bits/sec. At present, data transmission is one of the most swiftly developing areas of technology. In 1955 there were no more than 1,000 data transmission terminal units in the entire world. The figure rose to 35,000 by 1965 and 150,000 by 1970. The number was expected to exceed 1 million by 1975. In many countries the average annual growth has been 70-100 percent.

Data are transmitted in many countries primarily through switched telegraph or telephone networks. Because these networks are designed basically for transmitting telegrams or telephone messages, special terminal devices are added for data transmission. In addition to the standard telegraph or telephone unit (TU) (Figure l,a), a data transmission device (DTD), which makes the computer equipment compatible with the communications channel, and a communciations channel switch (S) are installed at the subscriber’s terminal. A switched connection is made “manually” by means of the TU. At the end of their conversation, or after exchanging telegraph messages, the participants agree to change to the data transmission mode, and they connect the communications channel to the DTD. With the conclusion of data transmission, they return to the initial mode. The sign-off is done in the normal way by means of the TU. The connection can also be made automatically, with computer control. The connection of the DTD to a switched telephone or telegraph network is expedient for small volumes of transmitted data, when the total time the subscriber line will be used for conversation and data transmission will not exceed 6–12 minutes at times of peak load. Telephone networks are used to transmit not only digital data but also analog data, or data in a continuous form, for example, cardiograms. To send large volumes of data —for example, between two computer centers—nonswitched (direct, leased) communications channels are used; information can be transmitted at rates of 2,400 bits/sec or more with non-switched telephone channels.

Telephone and telegraph networks cannot satisfy the greatest demands made of data transmission. Beginning with the late 1960’s, therefore, special switched data transmission networks have come into use. They are able to provide higher quality service to subscribers in terms of accuracy and rate of transmission, the possibility of choosing the category of work priority and speed, and the possibility of multiaddress communication, and they offer additional services as well. Two principles of switching are in use: channel switching, where a through channel from subscriber to subscriber is organized for the time of communication, and message switching. In the latter case, the message is transmitted in full from the sender-subscriber to the nearest switching center, where it is temporarily stored; when a channel in the necessary (assigned) direction becomes free, the message is sent on in stages, from center to center, until it is received by the receiver-subscriber. Computers are being used more and more frequently to control switching at the centers. 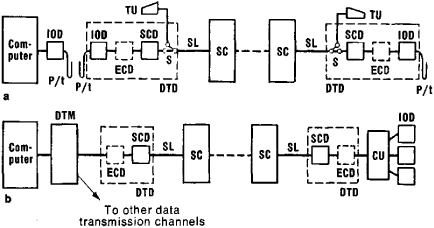 A subscriber’s DTD (Figure 1,a) converts data signals into a form suitable for transmission along the communication channel. In the case of telephone channels, for example, it makes use of frequency, phase, and other more complex types of modulation, as well as various forms of signal coding and recoding. Where necessary, the DTD includes a device to protect data against errors that arise in the communications channel because of noise. Since the early 1970’s, channels have provided data transmission with a probability of error of 10–3–10–5; by means of error control devices the probability can be reduced to 10–6–10–8. The use of error-correcting codes makes possible the detection of most errors, and the errors are usually corrected by an automatically repeated transmission. Error detection can also be done by noncode methods—through the use of a quality detector, which analyzes the known parameters of the signal, such as amplitude, frequency, and length. If the subscriber has adequate protection against errors in his computer equipment, other protection is not provided in the DTD. The DTD may also contain auxiliary units, such as calling and talk units and monitoring devices. The DTD is linked with the computer equipment through an intermediate information carrier, which usually is punched tape (Figure 1,a), or through electric circuits (Figure l,b). The latter type of DTD permits subscribers to “communicate” directly with a computer whose software has a set of programs that control the system of remote data processing (the exchange of data with subscriber terminals and with other computers). This type of DTD has no input-output devices. Examples of the first type of DTD are the Akkord-50 standardized DTD, which is used in the USSR with telegraph channels and has a rate of up to 50 bits/sec, and the Akkord-1200, which is used with telephone channels and has rates of 600 or 1,200 bits/sec. An example of the second type is the general-purpose equipment of the United System of Computers of the socialist countries.

Data transmission is in a formative stage and is developing in the following main directions: (1) the creation of special data transmission networks that involve both the development of switching centers providing improved service to subscribers and the introduction of digital communications channels formed by systems with time-division line multiplexing; (2) the optimal combination of the development of new networks with the use of existing telephone and telegraph networks; (3) the increase of the efficiency of high-rate communication channels—including the achievement of transmission rates of 4,800 bits/sec or more along telephone channels; (4) the simplification of the DTD for low-rate communication; and (5) the increase of the accuracy and reliability of communications.

Sending data over a communications network.
Copyright © 1981-2019 by The Computer Language Company Inc. All Rights reserved. THIS DEFINITION IS FOR PERSONAL USE ONLY. All other reproduction is strictly prohibited without permission from the publisher.

Feedback
Flashcards & Bookmarks ?
Please log in or register to use Flashcards and Bookmarks. You can also log in with
Flashcards ?
My bookmarks ?
+ Add current page to bookmarks
Mentioned in ?
References in periodicals archive ?
The report firstly introduced the Data Transmission System basics: definitions, classifications, applications and market overview; product specifications; manufacturing processes; cost structures, raw materials and so on.
Data Transmission System Market SWOT Analysis, Investment Feasibility Analysis, and Investment Return Analysis, 2019-2023 by Radiant Insights, Inc
With the combination of all the above listed outstanding features, the switch provides real-time, reliable data transmission and becomes compact high-bandwidth networking solution for factory automation, mining, oil & gas industries, surveillance applications, railway & highway deployments, etc.
Introducing Korenix Easy-to-Install and High Performance Industrial 8-Port Full Gigabit Ethernet Switch JetNet3008G
Packaged receiver photo (bottom) and test-setup (top) receiver that combines high-speed data transmission rate and rapid power-on and off functionality, while being extremely low power in the power-on state, about 88mW,' said Alessandro Cevrero, the primary author of the paper and a scientist of IBM Research Lab, Switzerland.
IBM demonstrates efficient, high bandwidth optical receiver
The basic symbols of data transmission dynamic scheduling problems can be summarized as in the following five tuples [10-12]:
The novel heuristic for data transmission dynamic scheduling problems
Once commercialized, 5G mobile communications technology will be capable of ultra-highspeed data transmission up to several hundred times faster than even the 4G LTE-Advanced technology due for launch later this year.
Samsung unveils world's first 5G mobile broadband tech
PMD is an undesirable effect that limits high speed (more than 10Gbps) data transmission. Obviously electric field impact to the optical fiber shows up as an increase in PMD due to higher birefringence.
Interaction between electromagnetic field and optical signal transmission in fiber optics/Elektromagnetinio lauko ir optinio signalo perdavimo saveika sviesolaidyje
The agreement with the South Carolina Budget and Control Board, financial details of which were not available, authorizes state departments, agencies, colleges and universities to obtain MPLS, Ethernet and DS1 services from tw telecom to improve data transmission, connectivity and networking performance while minimising costs.
tw telecom awarded contract by South Carolina to offer state government telecommunication services
At present, data transmission and access to the Internet using handsets are possible when users are in subway stations but not possible when subway trains are going through tunnels.
REFILING: Work to begin for seamless communication by cellphone in subway tunnels
ZTE Corporation (Hong Kong:0763.HK) (Shenzhen:000063.SZ), a provider of telecoms equipment and network solutions, said today that it has sent the first-ever data transmission at 10 Tb/s (terabits per second).
ZTE sends data transmission at 10 terabits per second
Nearly 60% of telecom services worst hit by hurricanes Ike and Gustav have been reestablished, thanks to temporary solutions in fixed phone system and data transmission, Cuba's Prensa Latina reported Sept.
State says 60% of phone lines back in service
It features a universal mounting system and wireless data transmission capability that could reduce installation and setup times.
Measuring arm
* Allowance of data transmission in copper or fiber optic-based technology for all fiber types by the universal system, provided they have the same external dimensions.
Push-pull plug