[′ded ‚spās]
(anatomy)
The space in the trachea, bronchi, and other air passages which contains air that does not reach the alveoli during respiration, the amount of air being about 140 milliliters. Also known as anatomical dead space.
(medicine)
A cavity left after closure of a wound.
(physiology)
A calculated expression of the anatomical dead space plus whatever degree of overventilation or underperfusion is present; it is alleged to reflect the relationship of ventilation to pulmonary capillary perfusion. Also known as physiological dead space.
(thermodynamics)
A space filled with gas whose temperature differs from that of the main body of gas, such as the gas in the capillary tube of a constant-volume gas thermometer.
McGraw-Hill Dictionary of Scientific & Technical Terms, 6E, Copyright © 2003 by The McGraw-Hill Companies, Inc. 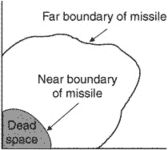 i. An area within the maximum range of a weapon, radar, or observer that cannot be covered by fire or observation from a particular position because of intervening obstacles, the nature of the ground, the characteristics of the trajectory, or the limitations of the pointing capabilities of the weapons.
ii. An area or zone that is within range of a radio transmitter but in which a signal is not received.
iii. The volume of space above and around a gun or guided missile system into which it cannot fire because of mechanical or electronic limitations.
iv. Dead spots in radio-range reception areas over transmitting stations similar to the cone of silence but lacking normal characteristics like buildup, dead spots, surges, and fades. This phenomenon is likely to be caused by flights over mountains, areas of ore deposits, and other factors. See also cone of silence.
v. The area located between the limit of the surface wave and the point of reception of the first sky wave. It is most common in the HF (high frequency) frequency range. Also called the skip zone.
An Illustrated Dictionary of Aviation Copyright © 2005 by The McGraw-Hill Companies, Inc. All rights reserved

Feedback
Flashcards & Bookmarks ?
Please log in or register to use Flashcards and Bookmarks. You can also log in with
Flashcards ?
My bookmarks ?
+ Add current page to bookmarks
Mentioned in ?
References in periodicals archive ?
In one study, over-reconstructing medial soft-tissue aspects and obliterating dead space resulted in a reduction of plate exposures from 38% to 8% even in patients reconstructed with lateral defects with a plate and soft tissue.
Titanium Reconstruction Plate Exposure Following Mandibular Reconstruction in Malignancy--A Case Report and Review of Literature
Potentiation of infection by suture closure of dead space. Am J Surg 1974;127(6):716-20.
Closure of subcutaneous fat in obese patients: a prospective randomised study in abdominal incisions
Breathing through the additional dead space caused a significant decrease in RER (p = 0.01) and VC[O.sub.2] (p = 0.04).
The effect of additional dead space on respiratory exchange ratio and carbon dioxide production due to training
(9.) Nunn JF, Campbell EJM, Peckett BW Anatomical subdivisions of the volume of respiratory dead space and effect of position of the jaw.
Hypercapnia: keeping therapy and diagnosis distinct
Dead Space 3 for the Xbox 360 includes Kinect support.
Games
Dead Space 3 is a survival horror game that was launched on the current console generation and became an instant hit with gamers.
Dead Space 3 demo coming to PSN and Xbox Live in January 2013
"We call it 'searching for hidden assets,'" said James Samson, a partner at the real estate firm Samson, Fink & Dubow, and an expert on tapping the value of condo and co-op dead space.
With budgets tight, buildings monetize 'dead space'
The video game is said to have freaked out players around the world, and even the people who created Dead Space 2 say they get scared playing it.
Dead Space 2 is so gruesome it scares its creator
Using an inferior pedicled musculoperiosteal flap (figure 1, C), we covered the dead space (figure 1, D).
Extensive external auditory canal cholesteatoma in the infratemporal area without mastoid involvement: use of a new surgical technique
Creative Minx said that it will create brand extensions through merchandising across multiple categories, such as collectibles, peripherals, apparel, and accessories for video game franchises of EA, including The Sims, MySims, Dead Space, Mass Effect 2, Dragon Age, Dante's Inferno(TM) and Army of Two.
Creative Minx Marketing named as licensing representative for EA
He added: "Too often new stadiums are surrounded by empty, dead space and we did not want that in Tottenham.
Spurs reveal stadium plans
Global Banking News-19 February 2009-EA Announces Dead Space Extraction Exclusive for the Wii(C)2009 ENPublishing - http://www.enpublishing.co.uk
EA Announces Dead Space Extraction Exclusive for the Wii