[′plān·iŋ]
(engineering)
Smoothing or shaping the surface of wood, metal, or plastic workpieces.
McGraw-Hill Dictionary of Scientific & Technical Terms, 6E, Copyright © 2003 by The McGraw-Hill Companies, Inc.
The following article is from The Great Soviet Encyclopedia (1979). It might be outdated or ideologically biased.

the process of machining materials, accompanied by chip removal; it is performed by the relative reciprocal motion of a tool, such as a planing cutter or blade, or of the workpiece. Chip removal usually occurs during the cutting stroke. 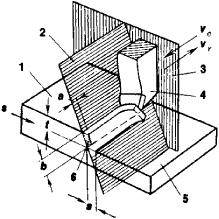 Figure 1. Diagram of the planing process on a shaper: (1) surface being worked, (2) cutting plane, (3) base plane, (4) bearing surface of the cutter, (5) machined surface, (6) cutting surface; (a) and (b) thickness and width, respectively, of the cut layer

Multitool planing makes better use of a planer’s capacity (Figure 2). High-output finish planing uses wide planing cutters with auxiliary cutting edges set at an angle φ1 = 0c. The cutters have lengths 1.2–1.8 times greater than the length of the feed, and they are equipped with hard-alloy faces. Large feeds—up to 20 mm per double stroke—are used. Efficient cutting conditions for planing are determined by the same procedures used for turning; the proper correction coefficients must be taken into account. 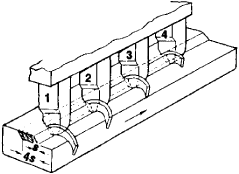 The principal drawbacks of planing are the impact of the cutting tool at the beginning of each stroke and the presence of a return stroke, which decreases the tool life and the productivity of the operation.

In woodworking, planing consists in the removal of material in the form of shavings by means of hand woodworking tools, such as planes, and the working of wood to produce planed, one-ply veneers.

A process for smoothing the surface of a material by shaving off small fragments.
McGraw-Hill Dictionary of Architecture and Construction. Copyright © 2003 by McGraw-Hill Companies, Inc.