branch of geometrygeometry
[Gr.,=earth measuring], branch of mathematics concerned with the properties of and relationships between points, lines, planes, and figures and with generalizations of these concepts.
..... Click the link for more information.  concerned with the two-dimensional representation of three-dimensional objects; it was introduced in 1795 by Gaspard Monge. By means of such representations, geometrical problems in three dimensions may be solved in the plane. (Such problems arise in all branches of engineering.) Modern mechanical drawing and architectural drawing are based on the principles of descriptive geometry.
The Columbia Electronic Encyclopedia™ Copyright © 2013, Columbia University Press. Licensed from Columbia University Press. All rights reserved. www.cc.columbia.edu/cu/cup/
The following article is from The Great Soviet Encyclopedia (1979). It might be outdated or ideologically biased.

a branch of geometry in which we study three-dimensional objects by investigating their planar representations, in particular, their projections. Descriptive geometry also studies methods of solving spatial problems on a plane.

The representation of three-dimensional objects on a plane was necessitated by various practical problems that arose during the construction of buildings and other structures and in the development of painting, architecture, and technology. Mechanical drawings obtained by projecting figures on a plane (projective drawings) are of particular importance. Actual practice imposes a number of requirements on such drawings. The most important are (1) ease of visualization of the original object; (2) “invertibility” of the drawing, that is, the possibility of exactly determining the depicted object from the drawing; (3) simplicity of carrying out the required constructions; and (4) accuracy of the graphical solutions. 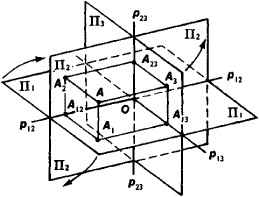 The three points A, A1, and A2 lie in the same (projecting) plane perpendicular to the intersection line ρ2 of the projection planes. The horizontal and vertical projections of an object are obtained by orthogonally projecting all the points of the object on Π 1 and Π 2, respectively. It is often useful to add a third projection of the object on a plane Π 3 perpendicular to Π1 and Π 2. The plane Π 3 is called the profile plane, and the projection on it is called the profile. Two projections of A (for example, A1 and A2) completely determine the third (A3).

To obtain a drawing consisting of the three projections (composite drawing), we superimpose Π1` and Π 3 on Π 2 (principal plane) by rotation about the lines p12 and P23 in which these planes intersect Π 2 (Figure 2). The positions of the lines P12 and P23 are usually not indicated in practice, that is, the positions of the projection planes are determined to within parallel displacement translations. A composite drawing is invertible since it is possible to determine from it the distance between any two points of the actual object. In fact, the segment AB (Figure 3) is the hypotenuse of the right triangle ABB*, in which AB* = A1B1, while B*B is the difference in the altitudes of B and A, represented in the drawing by the segment B2*B B2. It is thus possible to obtain the actual segment AB = A1B̄ (Figure 4) by jneans of a simple construction: all we need to do is draw B1B̄ ⊦ A1B1 and B1B̄ = B2 * B2. To make it easier to visualize an object on the basis of a composite drawing we add “visibility conditions” to the projections: of two points A and B whose projections on one of the projection planes coincide (for example, A1 ≡ B1), the visible point is the point nearest the observer, and hidden lines are represented by dashed lines. Figure 5 shows such a representation of a three-dimensional object by means of three projections called, respectively, the front view (elevation), top view (plan), and end view (profile). 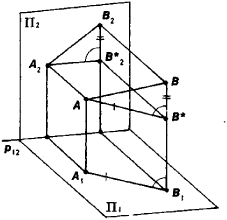 A composite drawing (made up of two or three orthogonal projections) is the most frequently used type of engineering drawing. All the necessary dimensions of a depicted object are easily determined from such a drawing. What it lacks is ease of visualization of the object. To obtain representations that make visualization easier we use a method called axonometry. 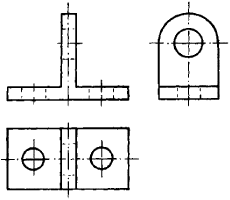 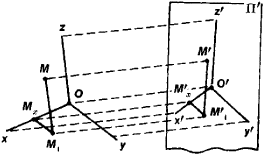 The following assertion (Polke’s theorem) is known as the fundamental theorem of axonometry. For a given axonometric axis system O’x’y’z’ (not a line) on the projection plane IT and a given ratio u:v:w of the distortion coefficients, we can find a position of the natural coordinate system relative to Π’ and a direction of projection that realize the selected axonometric axis system in IT and the ratios of the distortion coefficients. 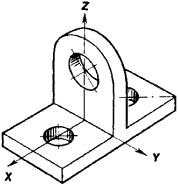 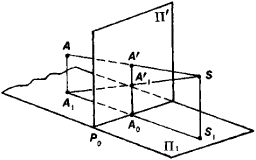 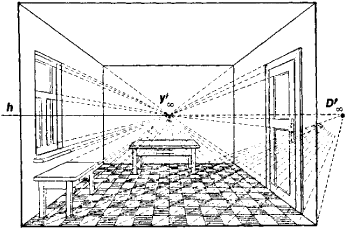 Using coordinates it is possible to construct a perspective employing central instead of parallel axonometry. In addition to perspective constructions on the plane (linear perspective), other types of central projection representations are also used.

Projections with number marks are used in preparing relief maps of the earth. The process is suggested in Figure 10. In this case, we must start with a sufficient number of points of the depicted surface in the drawing (Figure 10). Points of the surface are orthogonally projected onto the plane of projection, and the elevation of every point, that is, a number expressing the height of a point above the plane of projection in the selected unit of length, is written near the projection. As a result, the drawing is invertible. Projections of points with identical heights are connected by lines, called contour, or level, lines. This increases the clarity of the drawing and facilitates its use. In depicting the earth’s surface, we assume the plane of projection to be horizontal, and the contour lines are called horizontals. The shape and disposition of the horizontals enable us to determine the relief of the depicted part of the earth’s surface, to construct the surface’s cross-section specified by a plane σ on the drawing (Figure 10), and to solve other problems. Accuracy depends on the initial data. This method of depicting a surface is called the topographic method, and maps obtained by this method are called topographic.

History. The first attempts to create projective representations were made by man long before the Common Era. The Roman architect Vitruvius in his De architectura (first century B.C.) introduced the concepts of a plan (horizontal projection) and facade (front projection) of buildings. The Italian architect and scientist L. Alberti (15th century) already made use of vanishing points and provided a method of practical importance for constructing perspectives by means of networks. Leonardo da Vinci’s Treatise on Painting (published 1651) contains numerous suggestions for practical applications of perspective representations and, in particular, “observational” perspective. The German artist A. Diirer, in his Course in the Art of Measurement (1525), proposed a method of constructing perspectives using horizontal and vertical projections of an object. A rather complete presentation of methods of constructing perspectives was given by the Italian scientist G. Ubaldo (1600). The scientific foundations of descriptive geometry were developed in part by G. Desargues; however, it is G. Monge who is considered the founder of scientific descriptive geometry and contributed most to the subject. 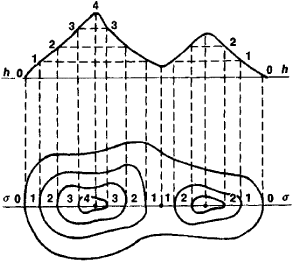 In ancient Russia drawings with elements of geometric projection were used in the construction of buildings. There exists a drawing (1581) of the city of Pskov using several laws of perspective. The drawings of the self-educated inventor I. P. Kulibin, the architect D. V. Ukhtomskii, and others are geometrically correct projective images. A course in descriptive geometry was first introduced in 1810 at the St. Petersburg Institute of Railroad Engineers. Ia. A. Sevast’ianov, the first Russian professor of descriptive geometry, wrote a number of texts dealing with various problems in descriptive geometry. The scientific development of descriptive geometry was given impetus by the geometric studies of E. S. Fedorov, who proposed a method of representing points in space on a plane by means of vectors. Fedorov’s method has been effectively applied to multidimensional descriptive geometry, which is used in physicochemical analysis (N. S. Kurnakov school). Soviet geometers (A. K. Vlasov, N. A. Glagolev, N. F. Chetverukhin) have carried out a number of investigations on the fundamental theorem of axonometry.

Feedback
Flashcards & Bookmarks ?
Please log in or register to use Flashcards and Bookmarks. You can also log in with
Flashcards ?
My bookmarks ?
+ Add current page to bookmarks
Mentioned in ?
References in periodicals archive ?
In this study, the combined use of four disciplines--physics, geomatics (LIDAR technology), descriptive geometry, and video analysis--proved to be valuable in finding reliable results.
The seven most reliable solutions were selected by comparing the maximum height of the ball in each analyzed case to the actual height shown in the video frame after applying descriptive geometry techniques.
Analysis of Andres Galarraga's Home Run of May 31, 1997
* Tsutsumi, Schrocker, Stachel, and Weiss (2005), using the mental cutting test (MCT), confirmed in a significant way that students following descriptive geometry courses obtained better visualization results than those taking design courses.
These EVEs should have tools that measure student learning and Web3D models as a resource to support learning and to improve spatial visualization skills, formerly acquired in descriptive geometry classes.
The graphic expression study module at our university is divided into four parts: technical drawing, geometry, descriptive geometry and CAD.
Spatial visualization learning in engineering: traditional methods vs. a web-based tool
The traditional way of teaching descriptive geometry and engineering graphics with pencil, T-square and triangles will be more and more replaced by electronic data processing.
Learning system for engineering graphics and design
Computer aided designing and spatial visualization systems can be successfully used in teaching descriptive geometry. However, these techniques are not conceived for didactic purpose because their use in training activity requires significant efforts.
ASPECTS OF CAD TECHNIQUES USED IN THE DESCRIPTIVE GEOMETRY STUDY
Using the CAD techniques implies the assimilation by students not only of the descriptive geometry but also of the methods for geometrically modeling and defining CAD features.
Nevertheless, teaching the descriptive geometry should take into consideration its essential specific purposes: improving visually geometric reasoning, training the spatial view and ability to transfer information between 2D and 3D space mutually.
The cylinder intersections visualization in teaching descriptive geometry
The second part of the document presents the course outline that details the following sections of the program and subject areas within the sections: (1) properties of natural gas; (2) general safety and emergency response procedures (general safety; emergency response procedures); (3) descriptive geometry and applied drafting mathematics (surveying and mapping; transmission and distribution systems; pipeline construction and inspection); (4) operation and maintenance of gas utility systems (corrosion control; operation and maintenance); (6) background knowledge (regulatory agencies and codes; industry advisory network); and (7) practical applications.
Occupation Competency Profile: Gas Utility Operator Certificate Program
Interestingly, Le Mee noted that the rise of engineering schools and the teaching of descriptive geometry at the end of the 19th century shifted common practice away from model making and toward the increased use of drawings for thinking and design.
Patenting progress