(redirected from desynchronize)
Also found in: Dictionary, Thesaurus.
The following article is from The Great Soviet Encyclopedia (1979). It might be outdated or ideologically biased.

(of an electroencephalogram), the replacement of time-ordered, synchronous high-amplitude (30-100 microvolts [μv ]) and slow (α and θ-activity) oscillations of biopotentials by less regular, low-amplitude (5-25 μV) and faster (β-activity) oscillations. The desynchronization of biopotentials in the cerebral cortex usually occurs in response to various stimuli (see Figure 1) but may be caused, for example, by some pharmaceuticals. Desynchronization is one version of the “activation reaction,” or the “waking reaction,” in which the leading role is played by influences exerted on the cortex of the formatio reticularis. Desynchronization also sets in during particular stages of sleep (the fast phase of sleep, or “fast” sleep). Desynchronization is a manifestation of the orientation reflex. 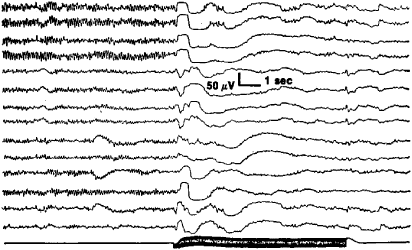 Figure 1. Human electroencephalogram. At rest a regular α-rhythm with a frequency of 10 periods per second is recorded on pickups from various regions of the brain (at left). In response to a light stimulus (the dark band at bottom) the α-rhythm is replaced by low-amplitude β-activity. Scale: 50 μV along the vertical, 1 sec along the horizontal.

Persistent desynchronization (a so-called flat electroencephalogram) is one indication of disruption of the activity of the central nervous system.

Feedback
Flashcards & Bookmarks ?
Please log in or register to use Flashcards and Bookmarks. You can also log in with
Flashcards ?
My bookmarks ?
+ Add current page to bookmarks
Mentioned in ?
References in periodicals archive ?
Leaders must avoid separate "stove pipe" meetings that can ultimately desynchronize plans.
The task force targeting meeting: operations synchronization
"Memory may emerge when rhinal and hippocampal neurons synchronously oscillate and then desynchronize."
Brain may forge some memories in waves. (Science News of the week)
Consequently, SCN cellular oscillators progressively desynchronize, until the [[Glu].sub.e]/ [[[Ca.sup.2+]].sub.i] alignment is restored.
The Role of Mammalian Glial Cells in Circadian Rhythm Regulation
"The brain must be able to first synchronize, and then later desynchronize, different areas in order to react, regulate mood, learn and solve problems," he suggested.
Abnormal brain networks may help explain multiple symptoms of depression
"Following stimulation, the neurons desynchronize, similar to the firing pattern that you would see when a healthy mouse is continuously moving," Petersson added.
Spinal cord stimulator shows promise to treat Parkinson's disease
In SCN, GABA seems to synchronize [35, 38] and desynchronize the neuronal networks [39].
Circadian Plasticity of Mammalian Inhibitory Interneurons
There is electrophysiological evidence of the feasibility of tRNS to modulate and desynchronize specific oscillatory brain activity [37, 40-43].
Auditory cortex tACS and tRNS for tinnitus: single versus multiple sessions
Several studies have shown that too much screen time disrupts sleep, desynchronizes the body clock, and desensitizes the brain's reward system.
What parents must know now: '13 Reasons Why,' or why more youngsters are committing suicide
McMahon, "Constant light desynchronizes mammalian clock neurons," Nature Neuroscience, vol.
Photoperiodic Programming of the SCN and Its Role in Photoperiodic Output
The visual cortex corresponding to the right visual field provides only distracting information; as a result, the frontal cortex desynchronizes with these neurons to reduce susceptibility to distraction.
Fractal cognitive triad: the theoretical connection between subjective experience and neural oscillations
When Jonas draws and redraws as performance, whether broad circles or conical shapes, faces or dogs or astronomical bodies, she cuts through our assumptions about the image--its transmission and comprehensibility in the present tense--just as surely as when she desynchronizes recorded image and sound.
Double takes: Pamela M. Lee on the art of Joan Jonas