[‚det·ən′ā·shən]
(chemistry)
An exothermic chemical reaction that propagates with such rapidity that the rate of advance of the reaction zone into the unreacted material exceeds the velocity of sound in the unreacted material; that is, the advancing reaction zone is preceded by a shock wave.
(mechanical engineering)
Spontaneous combustion of the compressed charge after passage of the spark in an internal combustion engine; it is accompanied by knock.
McGraw-Hill Dictionary of Scientific & Technical Terms, 6E, Copyright © 2003 by The McGraw-Hill Companies, Inc.
The following article is from The Great Soviet Encyclopedia (1979). It might be outdated or ideologically biased.

a process of chemical transformation of an explosive that is accompanied by liberation of energy and that propagates through the substance as waves from one layer to another with supersonic speed. The chemical reaction is introduced by an intense shock wave, which forms the leading front of the detonation wave. Because of the sharp rise in temperature and pressure behind the front of the shock wave, the chemical transformation takes place extremely rapidly in the very narrow layer immediately adjacent to the wave front (see Figure 1). 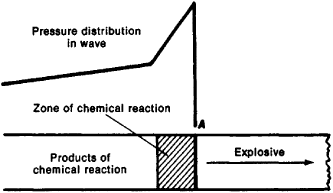 Figure 1. Diagram of a detonation wave: (A) shock wave front. The arrow shows the direction of propagation of the wave.

The energy liberated in the zone of chemical reaction continuously maintains a high pressure in the shock wave. Thus, detonation is a self-supporting process.

The excitation of detonation is the usual means of producing explosions. In an explosive charge, detonation creates an intense mechanical or thermal action (shock, spark discharge, or explosion of a metal wire by an electric current). The force of the action required to cause detonation depends on the chemical nature of the explosive. Substances sensitive to mechanical action include the so-called detonating powders (mercury fulminate and lead azide); they are usually a component of fulminating detonators, which are used to excite detonation of secondary (less sensitive) explosives.

In a homogeneous explosive, detonation usually propagates at a constant velocity, which is the minimum possible rate of propagation for a detonation wave in the given substance. In a detonation wave that is propagating with minimum velocity, the chemical reaction zone shifts with the speed of sound relative to the reaction products (but at super-sonic velocity with respect to the initial material). Because of this, rarefaction waves, which form upon the expansion of the products of the chemical reaction, cannot penetrate the reaction zone and weaken the shock wave that precedes it. A detonation corresponding to the above conditions is called a Chapman-Jouget process. The minimum rate of propagation that corresponds to the process is used as a characteristic of the explosive (see Table 1). The pressure created during the propagation of a detonation wave in a gaseous explosive is dozens of atmospheres; in liquid and solid explosives it is measured in hundreds of thousands of atmospheres.

Under certain conditions it is possible to excite in an explosive a detonation whose rate of propagation exceeds the minimum. The explosion of a solid charge placed in an explosive gaseous mixture produces a shock wave whose intensity is several times greater than the intensity of the wave corresponding to conditions of minimum velocity. This leads to the propagation in the gas mixture of a detonation wave of higher velocity. In this wave, unlike the Chapman-Jouget process, the chemical reaction zone moves at subsonic speed relative to the products of the reaction. Therefore, as a shock wave moves away from its place of formation, it weakens gradually (the effect of rarefaction waves is manifested), and the rate of propagation of the detonation is reduced to the minimum.

A detonation wave of higher velocity may also be produced in a nonhomogeneous explosive when the wave moves in the direction of decreasing density. A spherical detonation wave converging on a center may be taken as a further example of propagation of detonation with a velocity exceeding the minumum value. As the wave approaches the center, its velocity increases. At the center such a wave for a short time creates a pressure that exceeds by several times the value characteristic of the Chapman-Jouget state.

A stable detonation process is not always possible. For example, a stable detonation wave cannot propagate in a cylindrical explosive charge of insufficient diameter (scattering of the explosive through the side surface causes cessation of the chemical reaction before the substance has had time to react appreciably). The minimum diameter of the charge in which a nondecaying detonation process is possible is proportional to the width of the chemical reaction zone. In gaseous explosive mixtures, propagation of detonation can occur only under conditions such that the concentration of combustible gas (or vapors of combustible liquid) lies within certain limits. These limits depend on the chemical nature of the explosive mixture, the pressure, and the temperature. For example, with a hydrogen-oxygen mixture at room temperature and atmospheric pressure, the detonation wave can propagate if the volume concentration of hydrogen is between 20 and 90 percent.

The study of detonation waves in gases shows that if the initial pressure is lowered, the chemical reaction becomes pulsating in character. The uneven progress of the reaction causes distortion of the shock wave that is moving forward. Finally, at sufficiently low pressure, so-called spin detonation is caused, in which a break forms at the front of the detonation wave and rotates along a helical line. Further reduction of pressure causes extinction of the detonation.

In addition to detonation, another kind of chemical reaction wave, combustion, is possible in an explosive. Combustion waves always propagate with subsonic speed (usually considerably less than the speed of sound in the initial material). The motion of a combustion wave is conditioned by the comparatively slow processes of thermal conduction and dif-fusion. Under certain conditions combustion can become detonation.

In many cases, such as the combustion of a fuel mixture in internal-combustion or jet engines or of powder in the body of an artillery piece, detonation cannot be permitted. Because of this, combustion conditions and the chemical composition of the materials used are chosen in such a way that detonation, with its characteristic very sharp rise in pressure, cannot occur. 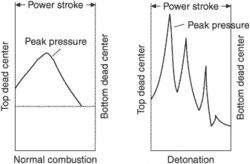 Engine cylinder pressure in normal combustion and in detonation. Differences in development of peak pressure values in both cases may be noted.
An explosion. A spontaneous, or exceedingly rapid, combustion of a fuel-air mixture after normal ignition inside the combustion chamber at a temperature and pressure critical to a particular type of gasoline, causing an explosion. The explosion is the result of a high-speed heat wave passing through the charge. Detonation occurs if the burning rate of the fuel is not compatible with the compression ratio and the spark plug advance. The most common indication of detonation is a high cylinder-head temperature. Throttle reduction is the most immediate and surest remedy.
An Illustrated Dictionary of Aviation Copyright © 2005 by The McGraw-Hill Companies, Inc. All rights reserved

Feedback
Flashcards & Bookmarks ?
Please log in or register to use Flashcards and Bookmarks. You can also log in with
Flashcards ?
My bookmarks ?
+ Add current page to bookmarks
Mentioned in ?
References in periodicals archive ?
Severe or extreme detonation can quickly lead to engine destruction directly, or by launching preignition, which can destroy an engine in seconds.
Intercooling 101: Detonation Defense: Intercoolers have been offered by OEMs and for field retrofit for years, but there are technical tradeoffs that don't make them an across-the-board winner
Meanwhile, Gauge #16 seams have a larger pressure peak than Gauge #17, and it is due to the negative pressure phenomenon which occurs in a small distance from detonation.
Research of Steel-Concrete Composite Bridge under Blasting Loads
The direct initiation of detonation in the preliminary chamber leads to the overdriven regime of DW propagation (see Figures 3(a) and 4).
Numerical Study of Detonation Wave Propagation in the Variable Cross-Section Channel Using Unstructured Computational Grids
In regards to the nuclear detonation two months earlier, code named Chena, Glenn was not allowed to work inside the tunnel area, but rad-safe directed him to supervise and direct his crew from outside the tunnel.
DEADLY EXPOSURE: "[The Atomic Energy Commission] released the following information: 'Accidental release of radioactivity detected offsite only.' This most likely translates to 'more deadly radiation exposure to workers.'"
The Army said that an explosive device, ready for detonation, was found in the Rahwa area in the outskirts of Arsal, in addition to an unspecified quantity of ammunition.
Army detonates explosive device near Arsal
The detonation velocity (D) and detonation pressure (P) were estimated by the Kamlet-Jacobs equation [15].
Theoretical and Experimental Studies on Thermal Behavior of 3-Methyl, 3-Carboxy, and 3-Nitro Substituted 1H,4H-6-nitro-pyrazolo[4,3-c]pyrazole
It is not suitable to analyze the combustion of Al and detonation products under high pressure and temperature.
One-Dimension Nonisentropic Model for the Flow of Aluminized Explosive Products
Furthermore, multipoint initiating technology based on the detonation wave collision is a new type of warhead control, which can decrease the reaction time of the charge and increase the energy utilization of the explosive [18].
Experimental Study of Bilinear Initiating System Based on Hard Rock Pile Blasting
As proof of concept, the researchers estimated the yield of the 1945 Trinity nuclear test in New Mexico--the world's first detonation of a nuclear device.
Bomb debris can reveal blast size
Police and gendarmerie took security measures in the area and took it to a shooting gallery for detonation.
Locals find WWI cannon ball in western Turkey