mandrake, plant of the family Solanaceae (nightshade family), the source of a narcotic much used during the Middle Ages as a pain-killer and perhaps the subject of more superstition than any other plant. The true mandrakes are of the genus Mandragora (especially M. officinalis), herbaceous perennials native to the Mediterranean and to Himalayan areas. The long root (sometimes called a mandrake), which crudely resembles the human form, has been credited since ancient times with such attributes as the power to magically arouse ardor, increase wealth, and overcome infertility (e.g., Gen. 30.14–16). It was said that the root gave forth such screams when pulled from the ground that death or madness resulted for any who heard; it was uprooted, therefore, by a dog who was tied to it and then called from a distance. The potency of the mandrake, which contains several alkaloids of medicinal value, has made it one of the most frequently mentioned plants in literature. Also sometimes called mandrake is the May apple (genus Podophyllum) of the Berberidaceae (barberry family), which has important medicinal properties. Mandrake is classified in the division Magnoliophyta, class Magnoliopsida, order Solanales, family Solanaceae. The May apple is classified in the order Ranunculales, family Berberidaceae.
The Columbia Electronic Encyclopedia™ Copyright © 2022, Columbia University Press. Licensed from Columbia University Press. All rights reserved. 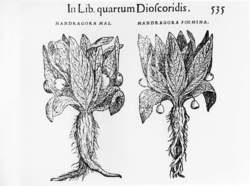