diesel engine, type of internal-combustion engine invented by the German engineer Rudolf Diesel and patented by him in 1892. Although his engine was designed to use coal dust as fuel, the diesel engine now burns fuel oil.

[¦dē·zəl ′en·jən]
(mechanical engineering)
An internal combustion engine operating on a thermodynamic cycle in which the ratio of compression of the air charge is sufficiently high to ignite the fuel subsequently injected into the combustion chamber. Also known as compression-ignition engine.
McGraw-Hill Dictionary of Scientific & Technical Terms, 6E, Copyright © 2003 by The McGraw-Hill Companies, Inc. 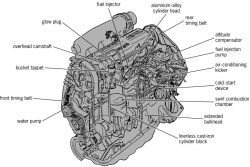 , motor
a type of internal-combustion engine in which atomized fuel oil is sprayed into the cylinder and ignited by compression alone
Collins Discovery Encyclopedia, 1st edition © HarperCollins Publishers 2005

Feedback
Flashcards & Bookmarks ?
Please log in or register to use Flashcards and Bookmarks. You can also log in with
Flashcards ?
My bookmarks ?
+ Add current page to bookmarks
Mentioned in ?
References in periodicals archive ?
"We are convinced that diesel engines will continue to be a fixed element of the drive-system mix, not least due to their low CO2 emissions," said Dieter Zetsche, Chairman of the Board of Management of Daimler and Head of Mercedes-Benz Cars, said in a statement.
Is death coming for diesel cars?
In order to detect these hidden problems in the Diesel engine, which directly affect the increase in its emissions, this paper has developed an optimal algorithmic model for system diagnostics of Diesel engines with electronic control exhaust gases after-treatment and its abbreviated version is shown in Figure 1.
Development of Algorithm Model for Exhaust Gases System of Diesel Engine with Electronic Control Diagnostics
Ravikumar, Optimization of operational parameters on performance and emissions of a diesel engine using biodiesel, doi.10.1007/s 13762-013-0273-5
A Review on effect of diethyl ether additive on combustion, performance and emission characteristics of a diesel and biodiesel/vegetable oil fuelled engine
Biodiesel has properties similar to that of petroleum diesel and blending of biodiesel with diesel fuel are the easiest method to use biodiesel in diesel engines. The use of biodiesel in conventional diesel engines results in substantial reduction of HC, CO and PM with a slight increase in N[O.sub.x].
Bio-fuel blend as diesel engine fuel for sustainable development
However, we will see the market situation for the demand and future sourcing of diesel engines from the Italian company," said Kenichi Ayukawa, MD and CEO of Maruti Suzuki, in an Economic Times report.
Maruti may cut sourcing diesel engines from Fiat by half
TE[pounds sterling]MOSAN is also working toward manufacturing 275 horsepower diesel engines for use in the agricultural sector and 450 horsepower diesel engines for the domestic automotive industry.
TE[pounds sterling]MOSAN seeks to step up engine production to 100,000 units
Due to its common parts with EF7 engine and its compatibility with euro V emission standards, IKCO diesel engine would be eco-friendly and economical.
Iranian Car Maker to Produce Diesel Engines
"Businesses using commercial vehicles are driven by ownership costs, and the diesel engine is ideal for commercial vehicles that clock up to 10,000kms or more per year," concluded Gring.
Emission standards and clean technology behind Bosch commercial vehicle diesel systems boost in MENA
And after looking at the market condition, diesel engine is the need of the hour.
Honda to pump ` 2,500 crore into India
Influenced by the emerging demand for diesel cars in India, the South Korean company will focus on diesel engine technology.
Hyundai Gearing to Launch Compact SUV, MPV Models in India