differential, in the automobile, a set of gears used on the driving (usually rear) axle. The two wheels on the driving axle must be interconnected in order to receive their energy from the same source, the driving shaft; at the same time they must be free to revolve at different speeds when necessary (e.g., when rounding a curve, the outer wheel travels farther and thus must revolve faster than the inner wheel in order to prevent skidding). These two requirements are met by the differential gearing. Furthermore, through it the rotating motion of the driving shaft is transmitted to the axle and the wheels. The axle is in two halves; to each half is attached a wheel at one end and, at the inner end, a gear (see gear). The end of the driving shaft is also equipped with a gear. By an ingenious arrangement of these and other gears, together constituting the differential, a difference in speed of the two wheels is compensated for without a loss of tractive force. A disadvantage of the conventional differential is that when one wheel is on a dry and the other on a slippery surface, the differential causes the wheel on the slippery surface to revolve at double speed while the other wheel remains stationary. This hazard can be avoided by use of a limited slip differential, which feeds power to one wheel when the other wheel starts to slip and thus keeps the automobile moving.

of the function f(x) may be given as

where the term R is infinitely small compared to Δx. The first term

in this expansion is called the differential of the function f(x) at point x0. From this formula it is seen that the differential dy depends linearly on the increment of the independent variable ΔJ, and the equality

shows in what sense the differential dy is the principal part of the increment Δy.

The concept of a linear function (linear transformation) plays an important part in this generalization. The function L(x) of the vector argument x is called linear if it is continuous and satisfies the equality

for any x’ and x” in the domain of definition. A linear function of an n-dimensional argument x = {x1, …, xn} always has the form

where a1 …, an are constants. The increment

of the linear function L(x) has the form

that is, it depends linearly on the vector increment h alone. The function f(x) is said to be differentiable at x if its increment Δf = f(x+h)-f(h), viewed as a function of h, has the principal linear part L(h), that is, is expressible as

For the case f(x) ≡ x, it follows from the general definition that df = h, that is, the increment h can be considered the differential of the argument x and denoted by dx.

If we now vary the point at which the differential df is defined, then df will be a function of two variables:

where h2 is an increment of x independent of h1 The second differential, d2f=d2f(x;h1,h2), obtained in such a way, is a function of three vector arguments x, h1 and h2 and is linear in each of the last two arguments. If d2f depends continuously on x, then it is symmetric in h1 and h2

The differential dnf = dnf (x;h1 … ,hn) of any order n is defined in an analogous manner.

In the calculus of variations the vector argument x itself is a function x(t), and the differentials df and d2f of the functional f[x(t)] are called its first and second variations and are denoted by δf and δ2f.

[‚dif·ə′ren·chəl]
(control systems)
The difference between levels for turn-on and turn-off operation in a control system.
(mathematics)
The differential of a real-valued function ƒ(x), where x is a vector, evaluated at a given vector c, is the linear, real-valued function whose graph is the tangent hyperplane to the graph of ƒ(x) at x = c ; if x is a real number, the usual notation is d ƒ = ƒ′(c) dx.
total differential
(mechanical engineering)
Any arrangement of gears forming an epicyclic train in which the angular speed of one shaft is proportional to the sum or difference of the angular speeds of two other gears which lie on the same axis; allows one shaft to revolve faster than the other, the speed of the main driving member being equal to the algebraic mean of the speeds of the two shafts. Also known as differential gear.
McGraw-Hill Dictionary of Scientific & Technical Terms, 6E, Copyright © 2003 by The McGraw-Hill Companies, Inc.

A mechanism which permits a rear axle to turn corners with one wheel rolling faster than the other. An automobile differential is located in the case carrying the rearaxle drive gear (see illustration). 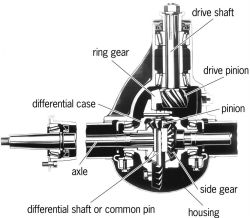 The differential gears consist of the two side gears carrying the inner ends of the axle shafts, meshing with two pinions mounted on a common pin located in the differential case. The case carries a ring gear driven by a pinion at the end of the drive shaft. This arrangement permits the drive to be carried to both wheels, but at the same time as the outer wheel on a turn overruns the differential case, the inner wheel lags by a like amount.

Special differentials permit one wheel to drive the car by a predetermined amount even though the opposite wheel is on slippery pavement; they have been used on racing cars for years and are now used by a number of car manufacturers. See Automotive transmission

1. Maths of, containing, or involving one or more derivatives or differentials
2. Physics Engineering relating to, operating on, or based on the difference between two effects, motions, forces, etc.
3. Maths
a. an increment in a given function, expressed as the product of the derivative of that function and the corresponding increment in the independent variable
b. an increment in a given function of two or more variables, f(x1, x2, …xn), expressed as the sum of the products of each partial derivative and the increment in the corresponding variable. FORMULA
4. Engineering an epicyclic gear train that permits two shafts to rotate at different speeds while being driven by a third shaft
5. (in commerce) a difference in rates, esp between comparable labour services or transportation routes
Collins Discovery Encyclopedia, 1st edition © HarperCollins Publishers 2005

Feedback
Flashcards & Bookmarks ?
Please log in or register to use Flashcards and Bookmarks. You can also log in with
Flashcards ?
My bookmarks ?
+ Add current page to bookmarks
Mentioned in ?
References in periodicals archive ?
Typical skew values across a differential channel range from 10 to 100ps, but predicting GWS is tricky.
Lee Ritchey, "Minimizing Skew in High Speed Differential Links," 2015.
How to Avoid Getting Totally Skewed: The first of a three-part series on designing around glass-weave skew
If for any E' [member of] [[epsilon].sup.E], [alpha] [??] [beta] is an impossible differential of E'.
Assume [micro] [right arrow] v is a possible differential of [[epsilon].sup.(r).subSP].
An Upper Bound of the Longest Impossible Differentials of Several Block Ciphers
In this section, we take some examples to clarify the advantages and the accuracy of the fractional differential transform method (FDTM) for solving a kind of nonlinear partial integro-differential equation with a weakly singular kernel.
where h, k [greater than or equal to] 1 in the upper bound of the sigmas and the differential transform of initial condition is as follows:
An Analytical and Approximate Solution for Nonlinear Volterra Partial Integro-Differential Equations with a Weakly Singular Kernel Using the Fractional Differential Transform Method
Note that this notation is different from the notation of impossible differential we typically see in the literature, since in our notation, it is possible that [there exist][alpha] [member of] A and [there exist][beta] [member of] B, such that [alpha] [right arrow] [beta] is not an impossible differential.
On the Complexity of Impossible Differential Cryptanalysis
To obtain a differential input, the [DVCC.sub.i] in Fig.
Universal Pseudo-Differential Filter Using DDCC and DVCCs
Tunc, "On the existence of periodic solutions of functional differential equations of third order," Applied and Computational Mathematics, vol.
Qualitative Theory of Functional Differential and Integral Equations 2016
If the function is z(x) then its differential transformation is given by the relation (EQUATION) which showed that the variable x and all ordinary derivatives of z(x) were represented by a parameter k.
REDUCED DIFFERENTIAL TRANSFORM METHOD FOR COUPLED PROBLEM OF THE SYMMETRIC REGULARIZED LONG WAVE EQUATIONS
In this paper, Laplace decomposition method is applied to solve non-linear coupled partial differential equations bu using the initial values.
NUMERICAL SOLUTION FOR NONLINEAR COUPLED PARTIAL DIFFERENTIAL EQUATIONS
where [I.sub.d] is the differential current, [I.sub.d] = [absolute value of [[??].sub.m] + [[??].sub.n]]; [I.sub.r] is the restraint current, [I.sub.r] = [absolute value of [[??].sub.m] - [[??].sub.n]]; [[??].sub.m], [[??].sub.n] are, respectively, the current phasor at both ends of the transmission line;
The effects of the reverse current caused by the series compensation on the current differential protection