An optical device consisting of an assembly of narrow slits or grooves, which by diffracting light produces a large number of beams which can interfere in such a way as to produce spectra. Since the angles at which constructive interference patterns are produced by a grating depend on the lengths of the waves being diffracted, the waves of various lengths in a beam of light striking the grating will be separated into a number of spectra, produced in various orders of interference on either side of an undeviated central image. By controlling the shape and size of the diffracting grooves when producing a grating and by illuminating the grating at suitable angles, a beam of light can be thrown into a single spectrum whose purity and brightness may exceed that produced by a prism. Gratings can now be made with much larger apertures than prisms, and in such form that they waste less light and give higher intrinsic dispersion and resolving power. See Diffraction

Transmission gratings consist of a large number of narrow transparent and opaque slits alternating side by side in regular order and with uniform separation, through which a beam of light will appear as a series of spectra in various orders of interference. Reflection gratings, either plane or concave, are used in most spectrographs. Such a grating may consist of an original ruling or of a metal-coated replica from an original. Large grating replicas can now be made which are practically indistinguishable in performance or permanence from an original.

Gratings are engraved by highly precise ruling engines, which use a diamond tool to press into a highly polished mirror surface a series of many thousands of fine shallow burnished grooves. If a grating is to give resolution approaching the theoretical limit, its grooves must be ruled straight, parallel, and equally spaced to within a few tenths of the shortest incident wavelength. Scattered light and false images may arise from local spacing error and groove shape variations of only a few hundredths of the diffracted wavelength.

A grating spectroscope usually consists of a slit, a lens or mirror to collimate the light sent through the slit into a parallel beam, a transmission or reflection grating to disperse the light, a lens or mirror to focus the light into spectrum lines (which are monochromatic images of the slit in the light of each wavelength passing through it), and an eyepiece for viewing the spectrum. If a camera is substituted for the telescope, the instrument becomes a grating spectrograph. If a photoelectric cell, a thermocouple, or other radiation-detecting device is used instead of a camera or telescope, the device becomes a grating spectrometer. See Infrared spectroscopy

A device usually incorporated into a spectrograph and employed in the production and study of spectra. Its action depends on the diffraction of light or other radiation by a very large number of very close and exactly equidistant parallel linear grooves. The grooves are produced by ruling very fine closely spaced scratches on glass or polished metal, forming either a transmission grating in the first case or a reflection grating in the second. These ruled gratings are very costly, and replica gratings – accurate plastic casts of ruled gratings – are usually used instead. Reflection gratings can be plane or concave; the latter can act as a focusing element for incident radiation, which would otherwise be partly absorbed if a lens were employed.

The diffracted radiation, once focused, produces a series of sharp spectral lines for each resolvable wavelength present in the incident beam. For a plane wave of a single wavelength λ, incident on a transmission grating at angle i , the successive wave trains passing through the grooves will travel different pathlengths. If the path difference between two adjacent grooves is a whole number of wavelengths, the wave trains will be brought to a focus as a bright image of the radiation source at a particular angle of refraction, d (see illustration), where

s is the spacing between adjacent grooves and n is an integer. Bright images will in fact be produced for each of the angles d corresponding to n = 1, 2, 3… These numbers denote the orders of the image. If, for a particular order, d is made equal to i , then

sin d = n λ/2s
If the incident beam is composed of various wavelengths, the image of any particular order, n = 1, 2, 3…, will appear at different points because d varies with wavelength. Hence a grating produces several spectra on either side of the incident ray (n = 0). The angular dispersion of the spectral lines, i.e. dd /dλ, will be high when the grooves are very fine and closely spaced (i.e. s is small). For the spectral resolution – separation of images of very nearly equal wavelength – to be high, the total number of grooves must be large: several thousand grooves per centimeter are common for the visible and ultraviolet regions of the spectrum.

an optical device that consists of a large number of parallel, equidistant, and identically shaped lines marked on a flat or concave optical surface. A diffraction grating is a periodic structure: the lines, whose shape is definite and constant for a given grating, repeat over a strictly identical interval d, known as the period of the grating (see Figure 1). Diffraction of light occurs in a diffraction grating. 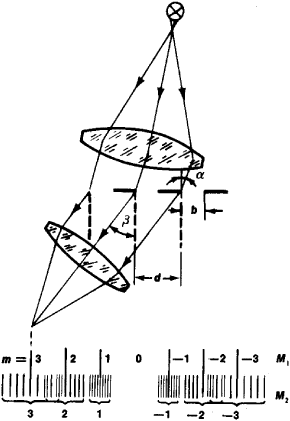 Figure 1. Diagram of the formation of spectraof a transmission diffraction grating consisting of slits upon illumination by monochromatic lighi (M1) and light of complex spectral composition (M2)

The principle of operation of a diffraction grating is most clearly shown by a transmission grating, when a monochromatic, parallel beam of light of wavelength λ is incident on the diffraction grating at an angle α. The diffraction grating consists of slits of width b separated by opaque intervals; interference of the light emanating from the individual slits occurs. As a result, after focusing on a screen, the location of the maximums (Figure 1) may be determined by the equation d (sin α + sin β) = mλ, where β is the angle between the direction normal to the grating and the direction of propagation of the beam (the diffraction angle); the integer m = 0, ±1, ±2, ±3, … is equal to the number of wavelengths by which a wave from some element of a given slit of the diffraction grating lags behind or leads the wave emanating from the same element of an adjacent slit. Monochromatic beams corresponding to the different values of m are called spectral orders, and the images of the entrance slits projected by the beams are called spectral lines. All orders that correspond to the positive and negative values of m are located symmetrically with respect to the zero order. The spectral lines become narrower and sharper as the number of slits is increased. If the radiation incident on a diffraction grating has a complex spectral composition, each wavelength will have its own set of spectral lines, and consequently, the radiation will be resolved into spectra according to the number of possible values for m. The relative intensity of the lines is determined by the energy distribution function for a particular slit.

The two main characteristics of a diffraction grating are its angular dispersion and its resolving power. Angular dispersion, which determines the angular width of the spectrum, depends on the difference ratio of diffraction angles for two wavelengths:

Thus, the angular width of the spectrum varies approximately proportional to the order number of the spectrum. The resolving power R is defined by the ratio of the wavelength to the smallest wavelength interval that still can by separated by the grating:

where N is the number of slits in the diffraction grating and W is the width of the hatched surface. The resolving power for given angles can be increased only by increasing the width of the grating.

Diffraction gratings are used not only in spectral instruments but also as optical sensors of linear and angular displacement (measuring diffraction gratings), as polarizers and filters of infrared radiation, and as beam splitters in interferometers. Diffraction gratings of all of the known types are manufactured in the USSR. The maximum number of lines per mm is 2,400, and the maximum dimensions of the hatched area are 300 × 300 mm.

[di′frak·shən ‚grād·iŋ]
(spectroscopy)
An optical device consisting of an assembly of narrow slits or grooves which produce a large number of beams that can interfere to produce spectra. Also known as grating.

A device that breaks up an electromagnetic wave into its different frequencies (wavelengths) by scattering them at different angles. For example, a series of thousands of scored lines in a glass plate diffracts light into a rainbow of colors. Lines of data pits on a CD give the same effect. See diffraction.

Feedback
Flashcards & Bookmarks ?
Please log in or register to use Flashcards and Bookmarks. You can also log in with
Flashcards ?
My bookmarks ?
+ Add current page to bookmarks
TheFreeDictionary presents:
Write what you mean clearly and correctly.
Mentioned in ?
References in periodicals archive ?
But regardless of X-ray potential, he says, using a diffraction grating to produce laser light "is a damn clever idea."
Electrons may shed light for X-ray lasers
Products using labels decorated with diffraction gratings will generate strong visual interest on retial shelves versus non-decorated lables.
CROWN ROLL LEAF INC
While RSpec works well analyzing spectra obtained with a spectroscope, the program can analyze spectra recorded through an inexpensive diffraction grating --a piece of glass ruled with thousands of lines that cause it to function like a prism.
Backyard Spectroscopy with RSpec: Try your hand at real-time science with your telescope
The first part to achieve is to design the most efficient diffraction grating. To do so, a range of wavelengths has been set, from 600 nm to 800 nm, which may differ from a solar cell technology to another.
Dynamic Interferometry Lithography on a Ti[O.sub.2] Photoresist Sol-Gel for Diffracting Deflector Module
Large sheets of plastic diffraction grating are readily available.
Fun with colour
The interplanar spacing of graphite used in [3] is nothing but the interatomic spacing a in the crystal lattice (diffraction grating) mentioned in Fig.
Addenda to my paper "new possible physical evidence of the homogeneous electromagnetic vector potential for quantum theory. Idea of a test based on a G. P. Thomson-like arrangement"
Orlov, "Experimental investigation of the polarization properties of reflective diffraction gratings for C[O.sub.2] lasers," Journal of Applied Spectroscopy, vol.
High-transmittance subwavelength metal grating with relief structure composed of multiple steps
Diffraction gratings play an important role in many optical applications, including optical telecommunications components, spectroscopy, and the chirped pulse amplification (CPA) for a high power laser system 1-4].
Total internal reflection-based high efficiency grating design for a metal-free polarizing filter applications using hybrid optimization procedure
The device was exposed to a laser beam ([lambda] = 532 nm) in a holographic setup in order to record a diffraction grating in the photopolymer layer.
Experimental conditions to obtain photopolymerization induced phase separation process in liquid crystal-photopolymer composite materials under laser exposure
Diffraction grating elements separate 'white light', which contains many different wavelengths of light, into separate wavelengths.
Shimadzu Corporation Launches New Series of Planar Diffraction Gratings for Laser System Applications
The process involves marking food contact PP packaging material with lines (a diffraction grating) that can be scanned by a laser to reflect a specific pattern.
Automatic sorting offers potential for increased recycled content
Li, "A highly sensitive optical sensor design by integrating a circular-hole defect with an etched diffraction grating spectrometer on an amorphous-silicon photonic chip," IEEE Photonics Journal, Vol.
A fast simulation method of silicon nanophotonic echelle gratings and its applications in the design of on-chip spectrometers