aberration, in optics, condition that causes a blurring and loss of clearness in the images produced by lenses or mirrors. Of the many types of aberration, the two most significant to the lens maker are spherical and chromatic. Spherical aberration is caused by the failure of a lens or mirror of spherical section to bring parallel rays of light to a single focus. The effect results from the operation of the laws of optics, not from defects in construction. Spherical aberration can be prevented by using a parabolic rather than a spherical section, but this involves much greater complexity and expense in lens or mirror construction. Chromatic aberration results in the blurred coloring of the edge of an image when white light is sent through a lens. This is caused by the fact that some colors of light are bent, or refracted, more than others after passing through a lens. For example, violet light is bent more than red and thus is brought to a focus nearer the lens than red. No single lens can ever be free of chromatic aberration, but by combining lenses of different types, the effects of the component lenses can be made to cancel one another. Such an arrangement is called an achromatic lens. See reflection; refraction. 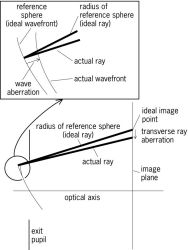 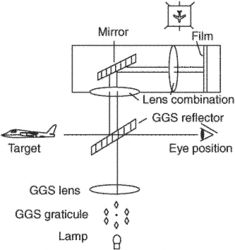