apostle (əpŏsˈəl) [Gr.,=envoy], one of the prime missionaries of Christianity. The apostles of the first rank are saints Peter, Andrew, James (the Greater), John, Thomas, James (the Less), Jude (or Thaddaeus), Philip, Bartholomew, Matthew, Simon, and Matthias (replacing Judas Iscariot). Traditionally the list of the Twelve Disciples includes Judas and not Matthias, and the list of the Twelve Apostles includes Matthias and not Judas. St. Paul is always classed as an apostle, and so sometimes are a few others, such as St. Barnabas. The principal missionary to any country is often called its apostle, e.g., St. Patrick is the apostle of Ireland, and St. Augustine of Canterbury the apostle of England. For the Apostles' Creed, see creed; for the Teaching of the Apostles, see Didache; for the earliest account of their activities, see Acts of the Apostles. 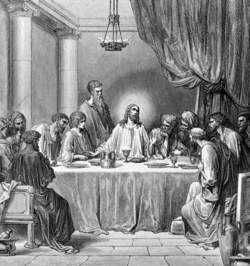 The Last Supper of Jesus and his disciples on the eve of his betrayal by Judas Iscariot and condemnation by the Romans. Fortean Picture Library.

Immediately after Jesus' baptism and period of temptation in the wilderness, he chose twelve followers—called disciples or apostles—to accompany him and witness his resurrection. One of his favorite teaching methods was to tell parables, short stories with a message. Often the crowds didn't understand what he was getting at, but in private he would explain to the disciples what he meant (Matthew 12:34-36).

The word apostle comes from the Greek word apostolos, meaning "one who is sent." Frequently it is used interchangeably with the word "disciple." But technically any follower is a disciple. Buddha had disciples. So did the founders of all the great world religions. Apostle is the word used in the Bible specifically to refer to the twelve followers of Jesus who became the patriarchs of the Church.

As in all things biblical, there are problems trying to determine exactly who the twelve were. Different books of the Bible list different names. Still, a consensus developed very early in Church history as to who they were.

Peter, James, and John were present for some very special events in Jesus' ministry. By being invited to witness the raising from the dead of Jairus's daughter (Luke 8:51), the transfiguration on the mountain (Matthew 17), and Jesus praying in the garden before his death (Matthew 26:37), they seem to have been his most intimate associates. Although Peter was given the top leadership position in the early Church (Matthew 16:17), all three figured prominently in the new movement. John is credited with being the author of five books of the New Testament, James with one, and Peter with two. Peter preached the first Christian sermon (Acts 2). Although it is a matter of dispute, James might have been Jesus' brother or, more correctly, given the fact of the virgin birth, half-brother. At least his name appears in the list of his brothers and sisters given in Matthew 13:55.

Andrew is the apostle who is always pictured bringing people to Jesus. He first followed John the Baptist, but he left with John's blessing to become an apostle of Jesus. Tradition says he later became an elder in the Jerusalem church.

Thomas, also called Didymus, was the doubter. His second name means "twin," but we have no idea who the other twin was. He became famous by refusing to believe Jesus had risen from the dead until he had seen the evidence with his own eyes, earning him the dubious title Doubting Thomas. But this seems to have been a part of his personality. In John 11 and 14, and twice in John 20, we are given evidence that he was a man who seemed to struggle with his faith.

James, sometimes called "the younger" or "the less" to distinguish him from James of the inner circle, seems to have been Matthew's brother. But because he is often identified with the Zealots, a radical group of Jewish patriots, he must have completely disagreed with his brother's politics, because Matthew was one of those "despised tax collectors" who were so hated by the common people.

Philip is the only apostle with a Greek name, probably indicating a rather liberal family upbringing.

Simon is known as "the Zealot." It follows that he was a Jewish idealist. Legend says he took the Gospel to England and preached there until the Romans crucified him.

The Apostles with Many Names

The name Bartholomew appears in Matthew, Mark, and Luke. In John, it suddenly changes to Nathaniel. If we accept the fact that there were only twelve apostles, a safe assumption given the number of times the group is referred to as "the Twelve," we have to conclude that Nathaniel and Bartholomew are one and the same. If this is the case, he was the oldest apostle and seems to have a delightful way of putting the

"young whippersnapper" Jesus in his place. In John 1, Philip finds Nathaniel and announces they have found the promised Messiah. He is Jesus of Nazareth.

We can almost hear old Nathaniel say, "Humph!" "Can anything good come out of Nazareth?" he mutters. Jesus must have liked him, though. When he first sees Nathaniel, he says, "Behold—an Israelite in whom there is no guile!"

Jude's real name is even harder to pin down. "Jude" is the Latin form of "Judah." But Matthew calls him "Lebbaeus" and Mark calls him "Thaddaeus." Luke tells us he is called "Jude, son of James."

Maybe Saint Jerome had the right idea. He referred to him as "Trionius," the "man with three names." Of all the apostles, he is the man we know least about. He makes only one statement in the entire Bible (John 14:22), but it elicits the longest, most detailed response Jesus gives to any question ever asked him. Perhaps besides being a man of many names, he is a man of few words.

The final apostle, of course, is Judas Iscariot, the one who betrayed Jesus for thirty pieces of silver. John calls him "the son of perdition" (John 17:12). Matthew says he would have been "better off not to have been born" (Matthew 26:24). The lists in all four Gospels add to his name the description, "the one who betrayed him."

Perhaps surprisingly, Jesus had made him the group's banker. What does this tell us? That money corrupts? That Jesus was trying to redeem him by giving him responsibility? The Bible is silent.

For two thousand years people have wondered. Did Judas have any choice? Did God foreordain him to be doomed? His betrayal had been prophesied. The prophet Zechariah had even foretold the amount of the betrayal, thirty pieces of silver.

As late as the 1960s, the staged opera Jesus Christ, Superstar pondered Judas's fate. Without him there would have been no betrayal, no cross, no resurrection— indeed, no Christianity. Was he the antihero? Or was he just a wicked sinner?

Even his death is a disputed one. In Matthew 27:3-10, we are told he "went out and hanged himself." In Acts 1:18-20, the story is that he took the silver, bought a field, "fell headlong, his body burst open, and his bowels spilled out." This discrepancy illustrates the lengths people will go to harmonize Bible stories. It is often said that Judas hung himself, but the rope broke and he fell forward, and so on—a conflation of the two versions of his death.

However Judas died, it left a vacancy. The remaining eleven members felt so strongly about filling the position that they immediately called a committee meeting in the first chapter of the book of Acts. They elected a man named Matthias and caused no end of controversy.

Matthias was never heard from again, prompting many to believe that in typical committee fashion they elected the wrong man. If they had waited patiently, the argument goes, they would have discovered God's real choice was a man who, at the time of the election, wasn't even a Christian. He was a fire-breathing Jewish patriot named Saul, and he even attended the trial of the first Christian martyr, "aiding and abetting" in his death.

When Saul converted and changed his name to Paul (see Paul, Saul of Tarsus), he apparently came to believe he was the man who was meant to be Judas's successor. Calling himself "the apostle abnormally born" (1 Corinthians 15:7) he went on to become the young Church's first missionary and greatest theologian.

1. a follower of the doctrines of a teacher or a school of thought
2. one of the personal followers of Christ (including his 12 apostles) during his earthly life
Collins Discovery Encyclopedia, 1st edition © HarperCollins Publishers 2005