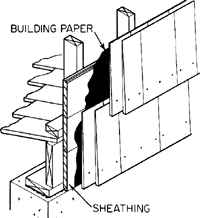 double course
A double layer of shingles or the like, one over the other, providing a minimum coverage of two thicknesses.
McGraw-Hill Dictionary of Architecture and Construction. Copyright © 2003 by McGraw-Hill Companies, Inc.

Feedback
Flashcards & Bookmarks ?
Please log in or register to use Flashcards and Bookmarks. You can also log in with
Flashcards ?
My bookmarks ?
+ Add current page to bookmarks
Mentioned in ?
References in periodicals archive ?
A double course and distance winner, the improved five-yearold can build on last month's excellent third to Muraaqub at Chelmsford.
REAL QUIRKE OF FATE
Funk was surprisingly low-profile behind RW Eaks on the Champions Tour last week when finishing tenth but is a double course winner and should give Woody most to worry about.
Golf: DiMarco can show his class against Garrigus; VIKING CLASSIC starts 1pm
Clive Hilton from Wallasey had double course for celebration.
SAILING: Kay takes trophy after long wait
Cardiff council executive has given the go-ahead to reverse plans to almost double course fees for pensioners, on the back of criticism from pensioners including Vernon Jones, 76, from Rhiwbina, pictured.
Poorest face price increase
Depending on the condition of the road, either a single or double course will be applied.
Microsurfacing quickly restores state park roadways
HENPECKED (4.15) put in his best effort for a wee while when second at Hamilton last time and Alistair Whillans' double course and distance scorer is the call in a trappy little 1m 2f handicap.
erik ready for ayr raid
Love is a double course winner - he and Couples also have fond Sherwood memories from their successes in the Franklin Templeton Shootout which DL3 won once and Boom Boom three times.
Golf: It is impossible to get away from the claims of host with the most; GOLF: TARGET WORLD CHALLENGE
JUSTIN LEONARD, another Texan, is the main man purely on course form - he's a double course winner and also a dual runner-up - but cannot be recommended on a woeful 2006 (75-78 last week and no top-20s since early February), Olin Browne, last year's runner-up, is 37 under for his last 12 rounds here but again is not playing well, and Shaun Micheel, fifth in 2002, looked totally knackered at Wentworth on Sunday and, despite wearing the same shirt for semi-final and final, surely doesn't need the money after his big Match Play payday.
Golf: Veteran Bart fits ideal Texas winning profile
i = [n.sub.cd]/n is synchronism rapport between double courses number in one minute of deformation element ([n.sub.cd]) and workpiece rotation speed;
A mathematical model for roughness in case of vibrorolling process
Its ancient origins are evident both in its lyre-like frame and the tuning of its three double courses.
The Welsh Academy Encyclopaedia of Wales Music