A splayed tenon, shaped like a dove’s tail, broader at its end than at its base; the joint is formed by such a tenon fitting into the recess of a corresponding mortise. See also: Joint
Illustrated Dictionary of Architecture Copyright © 2012, 2002, 1998 by The McGraw-Hill Companies, Inc. All rights reserved 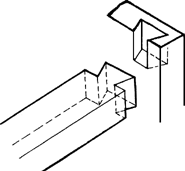 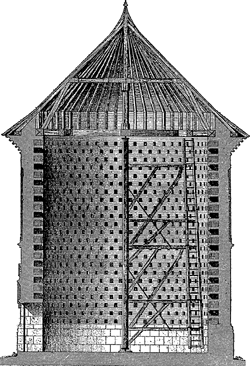 dovecote
1. A splayed tenon, shaped like a dove’s tail, broader at its end than at its base.
McGraw-Hill Dictionary of Architecture and Construction. Copyright © 2003 by McGraw-Hill Companies, Inc.

Feedback
Flashcards & Bookmarks ?
Please log in or register to use Flashcards and Bookmarks. You can also log in with
Flashcards ?
My bookmarks ?
+ Add current page to bookmarks
Mentioned in ?
References in periodicals archive ?
Samples for dovetail joints with five different angles (75[degrees], 78[degrees], 81[degrees], 84[degrees], and 87[degrees]) were prepared in accordance with the provisions of the TS 4951 (TSI 1986) standard.
Surface areas to be glued in dovetail joints according to cutter angles (A = joint and B = conjugate) are given in Table 2.
The Impact of Dovetail Angle in Single Dovetail Joints on Diagonal Compression Strength of Corner Joints for Box-Type Furniture
It's the first exhibition presented by his new arts organisation Dovetail Joints, and Bobby - who lives in Middlesbrough - is looking for the project to be a "re-occurring gallery".
All viewings are by appointment only, and you can find out more on the Dovetail Joints Facebook page.
Bongo beats drum for art; Exhibition above nightclub is first in a series of'Felix the Gallery'events in the area
Both Pembroke and Sofa tables were made after the introduction of dovetail joints and these must be evident.
Antique side tables - spot the difference
Inspired by traditional Victorian styles, the bedframe reveals hidden splendour in the shape of dovetail joints and hidden drawers - we absolutely adore the swooping lines of the sides and headboard.
Give your interiors some love; With Valentine's Day on the horizon, Claire Hornby takes a look at some furnishings to make hearts flutter
POST-WAR: This machine-made piece of furniture features intricate dovetail joints
Utility furniture but with an 'understated beauty'
You know what I mean, dovetail joints, spirit levels, that kind of thing.
Male shot; A man's- eye view, from the editor-at- large of Loaded
He points out the dovetail joints and wields a book called The Complete Japanese Joinery.
Furniture maker branches out
"I work mainly in European hardwood using mortise and tenon and dovetail joints by hand, rather than by machine.
The year of the entrepreneur
Attention to detail is clearly a hallmark of Mark's work, as each piece is held together by the detailed dovetail joints, co-opering and marquetry that are all part of the history of furniture making, and which he has reinstated as an integral part of his designs.
Feeling the warmth of wood
Drawers should be strongly constructed using traditional dovetail joints. The drawer backs and sides are ideally constructed in hardwood material such as beech and should run on similar hardwood rails.
Handcrafted furniture that will pass the test of time