[′drag ‚kō·i′fish·ənt]
(fluid mechanics)
A characteristic of a body in a flowing inviscous fluid, equal to the ratio of twice the force on the body in the direction of flow to the product of the density of the fluid, the square of the flow velocity, and the effective cross-sectional area of the body.
McGraw-Hill Dictionary of Scientific & Technical Terms, 6E, Copyright © 2003 by The McGraw-Hill Companies, Inc. 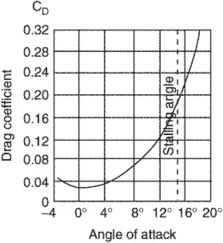 A typical drag coefficient curve of an airfoil.
i. Nondimensional coefficient equal to total drag divided by ¼ ρ V2S, where ρ is density, V is indicated air speed, and S is surface area of the body.
ii. A coefficient representing the drag on a given airfoil or other body or a coefficient representing a particular element of drag.
An Illustrated Dictionary of Aviation Copyright © 2005 by The McGraw-Hill Companies, Inc. All rights reserved

Feedback
Flashcards & Bookmarks ?
Please log in or register to use Flashcards and Bookmarks. You can also log in with
Flashcards ?
My bookmarks ?
+ Add current page to bookmarks
Mentioned in ?
References in periodicals archive ?
In summary, three drag coefficient approaches are used: a drift-velocity approach named DVA, an existing drag coefficient approach DCA, and the proposed drag coefficient approach [DCA.sup.*] (see Figure 1).
On the One-Dimensional Modeling of Vertical Upward Bubbly Flow
The inputs are same as those of RGF, while the outputs are lift and drag coefficients. Therefore, the function of this model can be depicted as
Static Aeroelastic Modeling and Rapid Analysis of Wings in Transonic Flow
Principally, this paper investigates the influence of buoyancy and channel confinement on recirculation length, drag coefficient, Strouhal number, and heat transfer rate.
Effect of Opposing Buoyancy on Two-Dimensional Laminar Flow and Heat Transfer Across a Confined Circular Cylinder
Because of the significant difference in particle geometry and thus in drag coefficient between oil shale ash and FCC fine catalyst, the inlet velocity producing the balance between the above effects for oil shale ash is smaller than that for FCC fine catalyst, as observed in our experiment.
The effect of inlet velocity on the performance of oil shale ash cyclone separator
L/D ratio: From the Lift and Drag coefficients plots following results are generated.
Computational analysis of ducted fan for Unmanned Aerial Vehicle
where [F.sub.D], [F.sub.L], and [M.sub.Z] are the drag force, the lift force, and the torsional moment, respectively; [C.sub.D], [C.sub.L], and [C.sub.M] are the drag coefficient, the lift coefficient, and the moment coefficient, respectively; Lis the models' reference length (L - 1400 mm); d is the diameter of naked conductor; V is wind velocity (V - 20 m/s); and p is the air density.
Wind Tunnel Tests on Aerodynamic Characteristics of Ice-Coated 4-Bundled Conductors
We compare the vibration amplitude, lift coefficient, and drag coefficient of the bare cylinder with the cylinder with the plate.
Structure Optimization of a Vibration Suppression Device for Underwater Moored Platforms Using CFD and Neural Network
where [L.sub.c] represents average trajectory length of the subject pedestrian demand (m); [L.sub.0] is crosswalk length (m); [mathematical expression not reproducible] is adjusted drag coefficient; [u.sub.0] represents average speed of discharge pedestrians (m/s); w represents the crosswalk width (m); [P.sub.2] represents the number of subject pedestrians.
A Modified Total Crossing Time Model of Bidirectional Pedestrians at Signalized Crosswalks