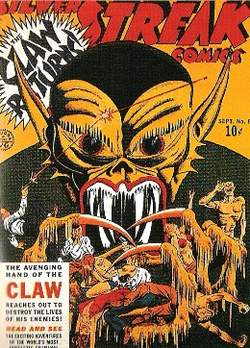 (pop culture)
From the fecund imagination of cartoonist Jack Cole—the comics genius who gave the world Plastic Man, eye-puncturing EC horror tales, and voluptuous Playboy vixens—snaked his most appalling concoction, the Claw, the “Oriental demon” described by Cole's biographer (and Maus writer/artist) Art Spiegelman as making “Ming the Merciless look like Mother Teresa” (Jack Cole and Plastic Man: Forms Stretched to Their Limits!, 2001). This adversary of the Golden Age (1938–1954) Daredevil (not to be confused with Marvel Comics' blind superhero of the same name), the Claw first terrorized humankind in Silver Streak Comics #1 (1939), from publisher Lev Gleason. Born in the Tibetan village ominously named Death's Head, this offspring of an Asian tyrant and a deformed (with tusk-like fangs) Caucasian murderess is orphaned during infancy and raised by villagers, who regret their decision as the boy ages. A misshapen devil with yellow skin, a reptilian-like head, gargantuan fangs, and clawed fingers, throughout his youth the Claw persecutes classmates and teachers—anyone who crosses him— “graduating” from reform school to prison, and then into the world as a warlord. Operating from a skull-shaped castle atop a Tibetan mountain, this “god of hate” sets out to “dominate the universe.” One of the few Golden Age supervillains with actual superpowers, the flame-breathing Claw cast lightning from his fingertips and grew to skyscraper height when enraged. The Claw invaded America by drilling under the Atlantic Ocean in his boring machine, attacking New York City, where he fought Daredevil for the first time in Silver Streak #7 (1941); in this initial battle, the gigantic Claw actually consumed Daredevil, but a throat full of dynamite forced him to cough up the hero. They waged an ongoing war for several years, the Claw assaulting Daredevil with a barrage of deathtraps, jeering “Die, swine!” with each deadly strike. The Claw joined forces with the Führer in the landmark Daredevil #1 (1941), aka Daredevil Battles Hitler. Continuing his villainy in a solo feature beginning in Daredevil #2, the Claw battled a different superhero, the Ghost, for several episodes. After appearing in seven issues of Silver Streak and enjoying an unprecedented (for a supervillain strip) four-year run in Daredevil, the Claw met his demise at the hands of Daredevil in Daredevil #31 (1945). A brief revival attempt (Boy Comics #89, 1953) failed, and the Claw has remained dormant since.
The Supervillain Book: The Evil Side of Comics and Hollywood © 2006 Visible Ink Press®. All rights reserved.

Feedback
Flashcards & Bookmarks ?
Please log in or register to use Flashcards and Bookmarks. You can also log in with
Flashcards ?
My bookmarks ?
+ Add current page to bookmarks
Mentioned in ?
References in periodicals archive ?
They relocated to Newcastle to start Dreamworld Cake and a family.
From Dreamworld to Bake Off tent for patisserie pair-
In October 2016 four people were killed when Dreamworld's Thunder River Rapids Ride malfunctioned.
Terrified visitors trapped 100ft in the air when theme park ride malfunctions; Six people were stuck when Dreamworld's Buzzsaw attraction suddenly stopped two-thirds of the way up, leaving children screaming and staff desperately scrambling to their rescue
The Yorkshireman described himself as being "in a bit of a dreamworld" in an interview and conceded shortly afterwards in his press conference that he could not have hand-picked a better script.
Dream start as skipper gets breaks; CRICKET
"I'm a mother, I have a family, I take my family to Dreamworld, I am sympathetic."
Dreamworld counts cost of deadly accident
"We messaged our friend who wasn't at the Dreamworld park and she googled it and told us about an article she had seen about the accident.
Kids see mums die in theme park hell; TRAGEDY FOUR KILLED IN OZ HORROR; Holidaymakers are crushed as raft flips on 'tame' rapids ride
Pugmire masterfully bring Lovecraftian mythos to life, particularly in their rendition of Lovecraft's beautiful yet deadly Dreamworld. An absolute "must-read" for Lovecraft fans!
In the Gulfs of Dream and Other Lovecraftian Tales
The former Reds midfielder held five-year-old Amber from the Dreamworld Wildlife Foundation.
Didi's happy but not Koala Toure! @JAMESPEARCEECHO james.pearce@liverpool.com Tour tales AROUND THE WORLD WITH THE REDS
Myer, Harvey Norman and DreamWorld will be amongst the first organisations to offer this functionality, ANZ said.
ANZ to offer contactless acceptance for UnionPay International cards
"Her prose manages to be at once lyrical and gritty, magical yet unsentimental, connecting a dreamworld of Ojibwe legend to stark realities of the modern-day."
Library of Congress Prize for American Fiction to be presented to novelist Louise ErdrichErdrich
It portrays a small selection of seven of DaliAEs oil paintings in 3-D in a valiant attempt to bring DaliAEs dreamworld to life.
Dal Pop-Ups
Dreamworld and Castle Resort at Hot Go Park, currently under construction, is a theme park being developed in the Fushun City Bay Economic Development Zone.
S&S Worldwide hired to. Create two tower rides for chinese park
The second section discusses the narrative challenges of describing such a dreamworld and the techniques of "oneiric realism" which the author has devised to meet those challenges.
Ontology and narrative technique in Kazuo Ishiguro's The Unconsoled