[′dril ‚bit]
(engineering)
drill
McGraw-Hill Dictionary of Scientific & Technical Terms, 6E, Copyright © 2003 by The McGraw-Hill Companies, Inc.
The following article is from The Great Soviet Encyclopedia (1979). It might be outdated or ideologically biased. 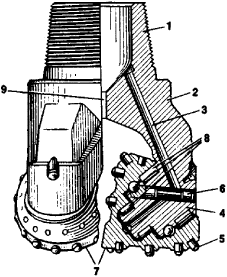 bit, 1
1. A small tool which fits in the chuck of a brace or drill, and by which it is rotated—thereby cutting or boring a hole.
2. The projecting blade of a key which is cut in a manner to actuate the tumblers and permit the lock bolts to be operated.
3. That part of a soldering iron which transfers heat and solder to the joint.
4. The cutting edge of a plane.
McGraw-Hill Dictionary of Architecture and Construction. Copyright © 2003 by McGraw-Hill Companies, Inc.

Feedback
Flashcards & Bookmarks ?
Please log in or register to use Flashcards and Bookmarks. You can also log in with
Flashcards ?
My bookmarks ?
+ Add current page to bookmarks
Mentioned in ?
References in periodicals archive ?
As a result of successful testing in both underground and surface coring environments, the complete line of new Longyear diamond drilling bits is now available to drilling companies throughout the world.
Boart Longyear Offers Diamond Bit Series