Med
a. the usually intravenous drop-by-drop administration of a therapeutic solution, as of salt or sugar
b. the solution administered
c. the equipment used to administer a solution in this way
Collins Discovery Encyclopedia, 1st edition © HarperCollins Publishers 2005

[drip]
(architecture)
hoodmold
(hydrology)
Condensed or otherwise collected moisture falling from leaves, twigs, and so forth.
(materials)
Oil which comes through the cloth of a paraffin wax press.
Filter drainings too dark to be included in filter stock.
(petroleum engineering)
A discharge mechanism installed at a low point in a gas transmission line to collect and remove liquid accumulations. Also known as blowcase.
McGraw-Hill Dictionary of Scientific & Technical Terms, 6E, Copyright © 2003 by The McGraw-Hill Companies, Inc. 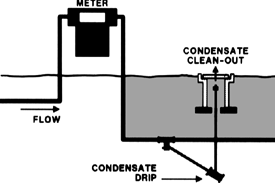 drip, 4
1. The outermost projecting molding around the top of a door or window, to discharge rainwater.
2. A throat, 2.
3. A pipe, or a steam trap and a pipe considered as a unit, which conducts condensation from the steam side of a piping system to the water or return side of the system.
4. A container that is typically installed at a low point in a gas piping system to collect condensate (i.e., liquids that may form within the gas system).
McGraw-Hill Dictionary of Architecture and Construction. Copyright © 2003 by McGraw-Hill Companies, Inc.

Feedback
Flashcards & Bookmarks ?
Please log in or register to use Flashcards and Bookmarks. You can also log in with
Flashcards ?
My bookmarks ?
+ Add current page to bookmarks
Mentioned in ?
References in periodicals archive ?
Lord Brennan was treated by ambulance and first aid staff, using an oxygen mask and a drip feed, and carried out of the chamber on a stretcher.
Peer in IVF row collapse
To ensure investors seeking either to delay or to drip feed this year's ISA contributions continue to earn a solid return on their cash, Charcolonline (www.
Charcolonline enhanced rate
ANDREW STRAUSS had to be attached to a drip feed as melting England broke their one-day duck in the furnace of Jamshedpur where temperatures hit 110 degrees in the shade.
Cricket: STRAUSS IS RED HOT
Charlotte has lung, heart and kidney problems and has a permanent drip feed.
Charlotte dad begs for her life
A MOTHER killed her ill nine-year-old son in Britain's top children's hospital by putting salt into his drip feed system, a court heard yesterday.
Salt mum 'killed' lad
It had been claimed he had negligently administered the drug when he should have been using sterile water to flush a drip feed at Liverpool Women's Hospital.
Killing trial doc free