drug resistance, condition in which infecting bacteria can resist the destructive effects of drugs such as antibiotics and sulfa drugs. Drug resistance has become a serious public health problem, since many disease-causing bacteria are no longer susceptible to previously effective drug therapies. For nearly 50 years after the first antibiotic, penicillin, became available in the 1940s, people took antibiotics' effectiveness against bacterial infections for granted. By the 1960s some doctors were predicting the end of infectious diseases. By the 1990s, however, a “post-antibiotic era,” characterized by the proliferation of untreatable bacterial strains, was considered inevitable, and the rate at which bacteria were becoming resistant to antibiotics was catching up with the rate at which new antibiotics were being produced.

The number of drug-resistant bacterial strains has increased in part because of the indiscriminate use of antibiotics, which have sometimes been overprescribed. Such misuse speeds the process by destroying bacteria that would compete with resistant strains. In addition, patients sometimes stop treatment when they start to feel better, leaving a residual population of bacteria that is likely to be more resistant to drug treatment. Another source of resistance is the routine use of antibiotics in animal feed to enhance growth, a practice that has led to resistant strains of Escherichia coli and Salmonella that have been passed on to consumers. The presence of drugs in the water supply, due at least in part to human and animal excretion and the disposal of unused drugs, is also believed to contribute to drug resistance in bacteria.

Resistance is due to random genetic mutations in the bacterial cell that alter its sensitivity to a single drug or to chemically similar drugs through a variety of mechanisms. Many bacteria can transfer their resistance to other bacteria of the same or different species. Resistance has occurred in common infectious bacteria such as pneumococcus (a cause of pneumonia, meningitis, and childhood ear infections) and enterococcus (a cause of wound infections). It has also occurred in such diseases as malaria, tuberculosis, and gonorrhea. Concerns are increasing as strains develop resistance to multiple drugs, including even the most powerful antibiotics (e.g., vancomycin). Although drug companies are again concentrating on antibiotic research, seeking new antibiotics and attempting to develop chemically altered derivatives of existing ones that can block bacterial resistance, such research does not necessarily proceed swiftly and the testing required to ensure drug safety also slows the introduction of new antibiotics. Many infectious-disease experts have urged that doctors consider the public health risk before prescribing antibiotics and that the government regulate the use of antibiotics in agriculture. Beginning in 2017, the Food and Drug Administration ended over-the-counter agricultural use of antimicrobial drugs deemed medically important; it also has moved to phase out voluntarily the use of such drugs for enhancing livestock growth.

The ability of an organism to resist the action of an inhibitory molecule or compound. Examples of drug resistance include disease-causing bacteria evading the activity of antibiotics, the human immunodeficiency virus resisting antiviral agents, and human cancer cells replicating despite the presence of chemotherapy agents. There are many ways in which cells or organisms become resistant to drugs, and some organisms have developed many resistance mechanisms, each specific to a different drug. Drug resistance is best understood as it applies to bacteria, and the increasing resistance of many common disease-causing bacteria to antibiotics is a global crisis.

Some organisms or cells are innately or inherently resistant to the action of specific drugs. In other cases, the development of drug resistance involves a change in the genetic makeup of the organism. This change can be either a mutation in a chromosomal gene or the acquisition of new genetic material from another cell or the environment.

Organisms may acquire deoxyribonucleic acid (DNA) that codes for drug resistance by a number of mechanisms. Transformation involves the uptake of DNA from the environment. Once DNA is taken up into the bacterial cell, it can recombine with the recipient organism's chromosomal DNA. This process plays a role in the development and spread of antibiotic resistance, which can occur both within and between species.

Transduction, another mechanism by which new DNA is acquired by bacteria, is mediated by viruses that infect bacteria (bacteriophages). Bacteriophages can integrate their DNA into the bacterial chromosome.

Conjugation is the most common mechanism of acquisition and spread of resistance genes among bacteria. This process, which requires cell-to-cell contact, involves direct transfer of DNA from the donor cell to a recipient cell. While conjugation can involve cell-to-cell transfer of chromosomal genes, bacterial resistance genes are more commonly transferred on nonchromosomal genetic elements known as plasmids or transposons. See Deoxyribonucleic acid (DNA) 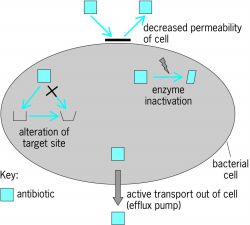 By altering the target site to which an antibiotic must bind, an organism may decrease or eliminate the activity of the antibiotic. Alteration of the target site is the mechanism for one of the most problematic antibiotic resistances worldwide, methicillin resistance among Staphylococcus aureus. See Bacterial genetics

The most common mechanism by which bacteria are resistant to antibiotics is by producing enzymes that inactivate the drugs. For example, β-lactam antibiotics (penicillins and cephalosporins) can be inactivated by enzymes known as β-lactamases.

Active transport systems (efflux pumps) have been described for the removal of some antibiotics (such as tetracyclines, macrolides, and quinolones) from bacterial cells. In these situations, even though the drug can enter the bacterial cell, active efflux of the agent prevents it from accumulating and interfering with bacterial metabolism or replication.

Bacteria are intrinsically resistant to many drugs based solely on the fact that the drugs cannot penetrate the bacterial cell wall or cell membrane. In addition, bacteria can acquire resistance to a drug by an alteration in the porin proteins that form channels in the cell membrane. The resistance that Pseudomonas aeruginosa exhibits to a variety of penicillins and cephalosporins is mediated by an alteration in porin proteins.

In the hospital environment, many factors combine to promote the development of drug resistance among bacteria. Increasing use of powerful new antibiotics gives selective advantage to the most resistant bacteria. In addition, advances in medical technology allow for the survival of sicker patients who undergo frequent invasive procedures. Finally, poor infection control practices in hospitals allow for the unchecked spread of already resistant strains of bacteria.

Outside the hospital environment, other important factors promote antibiotic resistance. The overuse of antibiotics in outpatient medicine and the use of antibiotics in agriculture exert selective pressure for the emergence of resistant bacterial strains. The spread of these resistant strains is facilitated by increasing numbers of children in close contact at day care centers, and by more national and international travel.

A multifaceted worldwide effort will be required to control drug resistance among disease-causing microorganisms. Ongoing programs to decrease the use of antibiotics, both in the clinics and in agriculture, will be necessary. The increased use of vaccines to prevent infection can help limit the need for antibiotics. Finally, the development of novel classes of antibiotics to fight emerging resistant bacteria will be required. See Antibiotic, Bacteria