druids (dro͞oˈĭdz), priests of ancient Celtic Britain, Ireland, and Gaul and probably of all ancient Celtic peoples, known to have existed at least since the 3d cent. BC. Information about them is derived almost exclusively from the testimony of Roman authors, notably Julius Caesar, and from Old Irish sagas, supplemented to some extent by archaeological evidence. The druids constituted a priestly upper class in command of a highly ritualistic religion, which apparently centered on the worship of a pantheon of nature deities. Druids were also responsible for the education of the young and generally for the intellectual life of the community; although apparently literate, they taught by oral transmission, and their courses are said to have lasted as long as 20 years. The druids believed in immortality of the soul in a nonjudgmental world of the dead. Their religious ceremonies seem to have been performed chiefly in tree groves (the oak and the mistletoe that grows on the oak were held sacred) and at river sources and lakes. The druids performed animal and human sacrifices and practiced divination and other forms of magic. Tacitus mentions a Celtic tribe, the Bructeri, that was led by a prophetess, and Irish legend confirms that there were women druids, although their precise role is not known. According to Caesar, the druids in Gaul were organized into a federation or brotherhood that extended across tribal divisions and was headed by an archdruid; they met once a year, probably on the site of Chartres, to arbitrate private and intertribal disputes. They thus wielded great political power and were an important cohesive force among the Celtic tribes. The druids in Gaul were the core of the rebellions against Rome. Their power, although broken by the Romans, finally yielded only to Christianity. In the late 18th and 19th cent., interest in the druids was spurred by archaeological discoveries and by the romantic movement. The megalithic monuments of France and Great Britain, notably those at Carnac and Stonehenge, were once ascribed to them, but these are now known to predate Celtic culture. 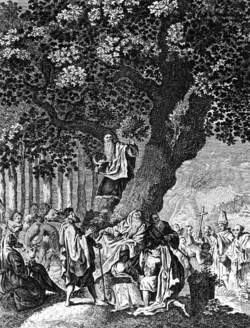 Priest class of the Celts—the physicians, historians, priests, and scholars— ranking next to the king. Little is actually known about them except that, according to Julius Caesar's Gallic Wars, they spent twenty years in training, and all their knowledge was passed on orally. Caesar placed them in southern and central Gaul from about 500 BCE, as did the Stoic philosopher Poseidonius (135-50 BCE) of Syria, the main authority on the Celts. The Roman historian Ammianus (330-395 BCE) said that Druids were "uplifted by searchings into things most secret and sublime." They were later banned by Tiberius and Claudius, mainly because of their human sacrifices. Pliny, in his Natural History, refers to their magical cures.

Lewis Spence suggests a non-Celtic and even non-Aryan origin for the Druids, writing that it is possible the "so-called Iberian or Megalithic people of Britain introduced the immigrant Celts to the Druidic religion." Certainly Britain became the center of that religion, the Isle of Anglesey being the chief seat. Classical writers refer to Druidesses, so women also figured among them. The name Druid itself is of unknown origin. Some suggest that it comes from the Gaelic Druidh, meaning "wise man" or "magician," while others suggest the Old English drud, a "learned person." Pliny the Elder believed it referred to the Greek drus, meaning "oak."

In R. A. S. Macalister's The Archaeology of Ireland (Dublin, 1928), the author suggests that the Irish Druids at least were learning sacred hymns dating from before the introduction of writing and, "like the Vedas in ancient India, preserved by oral tradition, because they would have been profaned were they to be committed to this novel art." At that time, both Greek and the ancient Irish Ogham alphabet existed and were known to the Druids, so it was by choice that the learnings were not written down.

Druidic temples were out of doors, frequently in a grove of oak trees. They were usually circular or oval in form, sometimes enclosed by a palisade or bank and a ditch. In the center was a large stone representing deity. There was a degree system for the priests and priestesses, with two of the grades being Bards (bardoi) and Ovates (vates or manteis). W. B. Crow believes that Druidism was a tree cult, since Europe was, at that time, mainly covered with extensive forests, the predominant tree being the oak. We certainly know that an object of their veneration was mistletoe, a semiparasitic plant growing on trees and particularly prevalent on the oak tree. (The Teutons also held mistletoe sacred.) The Druids would cut the mistletoe from the tree with a golden sickle, then allowing it to fall into a cloth, since it was not allowed to touch the ground. The only detailed account we have of this ceremony comes from Pliny, who stated that the mistletoe was cut on the sixth day of the moon. He also said that two white bulls were sacrificed after the cutting, and a feast was held.

Druids worshiped at the same festival dates that are recognized by Witches, the major ones being Samhain, Imbolc, Beltane, and Lughnasadh. The minor ones were called by the Druids Alban Eilir (spring equinox), Alban Hefin (summer solstice), Alban Elfed (autumn equinox), and Alban Arthan (winter solstice).

Several modern-day groups and societies dub themselves Druids. One is a society called the Order of Bards, Ovates, and Druids, founded in 1717 and reorganized in 1964. It held its first summer solstice ceremony at Hunsbury Hill, Northamptonshire, in 1964. Another is the Secular Order of Druids, headquartered in Frome, Somersetshire. The British Druid Order started in 1979. The Ancient Order of Druids claims to be "the parent body of all Druidical Societies," according to its literature, "established nearly two hundred years ago."

There are also modern Pagan groups who follow the Druidic path. One of the major American leaders of Druidism as a part of neo-paganism is Isaac Bonewits (b. 1949), who founded the Schismatic Druids of North America and Ar nDraiocht Fein, a Druid fellowship. He started the periodical Druid Chronicler, later renamed Pentalpha Journal, and wrote The Druid Chronicles (Evolved).

Feedback
Flashcards & Bookmarks ?
Please log in or register to use Flashcards and Bookmarks. You can also log in with
Flashcards ?
My bookmarks ?
+ Add current page to bookmarks
Mentioned in ?
References in periodicals archive ?
"We need everyone to | Druids boss Huw Griffiths stick together, and for the fans to come out and get behind us, even in the tough times," he said.
Huw calls on Druids 'to stick together'
But Druids Alter list of attributes don't end there.
HISTORICAL GEM [...]; FEATURE PROPERTY
The Nomads started the encounter brightly with almost constant presence in the Druids' half in the opening five minutes, but clearances from the home defence ensured keeper Michael Jones went untested.
Nomads on target to keep top spot
Met started with pace and purpose in the opening few minutes but Druids created the first real chance thanks to a fantastic delivery from Ben Burrows.
Play-off woe as Met fall at final Euro hurdle again
The area was then named Druids Heath in reference to the Drews' family of farmers who had tried to work the relatively infertile land around these parts until the mid-19th century.
WALK IN THE PARK; GRAHAM YOUNG VISITS DRUIDS HEATH AT DAWN
Caernarfon Town remain in Druids' slipstream after a 3-0 triumph over local rivals Porthmadog.
IT'S as you were at [...]
In the latter sphere, Druids Aghadoe (Irish Grand National), Druids Mickey Jo (Springbok, Champion Hurdle) and Sizzlers Bossman (Midland Champion Hurdle) have been joined by Baran Bally Hi, dual English/ Irish Grand National winner who also bore the 'Druids' label until being acquired by Middlesex owner Stefan Baran.
Bally Hi joins Brennan roll of honour
With a bit more composure in front of goal, Druids might have taken a lead to defend into the second leg and My-Pa, who knew they had been let off the hook, made sure there was no room for error at the second time of asking.
Dream is over for Druids in Finland; EUROPA LEAGUE
The move comes thousands of years after the first druids worshipped in Britain.
UK charity commission to classify Druidry as a religion
Were the Druids devotees of divine nature, worshipping in sacred oak groves, or barbaric priests of a bloody religion, stuffing humans into a gigantic 'Wicker Man' and burning them alive?
Blood and Mistletoe: The History of the Druids in Britain
Rather than divide his book into chapters on different druidic organizations or deal with the modern Druids chronologically, Hutton instead uses a thematic approach.
The Druids
Unless you own a 20-sided dice, have an auntie called Morgana Starchild and can draw a pentagram without taking the pencil off the paper, chances are you won't know much about Druids.
Wielding great powers; DOCUMENTARY OF THE WEEK JULIUS CAESAR AND THE DRUIDS TUESDAY,5,8pm