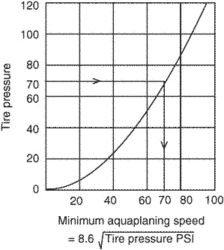 A condition that can exist when a high-speed aircraft lands on a water-covered runway. Water forms a fine film between the tires and the runway surface, rendering braking relatively ineffective and causing the aircraft to skid. An effective antiskid system can prevent aquaplaning. Runway grooving is the most effective method of preventing aquaplaning. When there is a thin film of oil, dirt, or rubber particles mixed with water that prevents tires from making positive contact with the pavement and makes braking ineffective, the phenomenon is called vicious hydroplaning. A thumb rule for determining minimum aquaplaning speed in knots is 8.6 × the square root of tire pressure in psi (lb/in2). The minimum full aquaplaning speed (where the entire tire is lifted off the runway) is 9 × the square root of tire pressure in psi. Where a stationary wheel lands on a flooded runway, the minimum full aquaplaning speed is 7.7 × the square root of the tire pressure in psi. Also called hydroplaning and dynamic hydroplaning.

Feedback
Flashcards & Bookmarks ?
Please log in or register to use Flashcards and Bookmarks. You can also log in with
Flashcards ?
My bookmarks ?
+ Add current page to bookmarks
TheFreeDictionary presents:
Write what you mean clearly and correctly.
Mentioned in ?
References in periodicals archive ?
Approximately what is the minimum speed in which dynamic hydroplaning will begin?
The quiz
Dynamic hydroplaning is the most common and easiest to understand.
Contaminated runways: unstabilized approaches claim their share of runway excursions, but slick pavement plays a major role as well
I began water skiing, courtesy of dynamic hydroplaning, in a 100,000-pound aircraft at about 125 knots.
Water-skiing at 100,000 pounds