loran (lôrˈănˌ), long-range, accurate radio navigational system used by a ship or aircraft to confirm or to determine its geographical position. The term loran is derived from the words long-range navigaton. Loran, operating in the 1,700-kHz range, measures the time-of-arrival difference between two signals transmitted from two geographically separated ground stations. The pulse from the first station, called the master, triggers the second station, called the slave, into transmitting a similar pulse after a set time delay. Knowing the elapsed time difference, the navigator refers to a loran chart and selects his line of position. The chart contains groups of hyperbolic curves of constant time differences between particular station pairs. The position of the receiver (ship or airplane) will be somewhere along the curve that corresponds to the measured time difference. By taking a similar time-difference reading from a second pair of stations whose curves intersect those of the first pair, a definite geographic fix may be obtained.
The Columbia Electronic Encyclopedia™ Copyright © 2022, Columbia University Press. Licensed from Columbia University Press. All rights reserved. 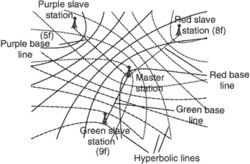 (2) (LOng RAnge Navigation) A ground-based navigation system developed by the U.S. government during World War II. Modeled after the British GEE system, LORAN receivers pinpoint their location by triangulation with three LORAN transmitters, approximately 75 of which are located throughout the world. With 29 ground stations covering North America, LORAN's long-range signals provide an economical navigation system, although less precise than GPS with its correction systems (see GPS and GPS augmentation system).

eLORAN
After China shot down its own communications satellite in 2007, there was renewed interest in LORAN as backup to the satellite-based GPS system, should it be compromised. eLORAN (an Enhanced LORAN) uses more advanced receivers and transmission modes, which improves LORAN accuracy to eight meters. eLORAN receivers accept all signals within range as well as a new set of correction signals.
Copyright © 1981-2019 by The Computer Language Company Inc. All Rights reserved. THIS DEFINITION IS FOR PERSONAL USE ONLY. All other reproduction is strictly prohibited without permission from the publisher.

Feedback
Flashcards & Bookmarks ?
Please log in or register to use Flashcards and Bookmarks. You can also log in with
Flashcards ?
My bookmarks ?
+ Add current page to bookmarks
Mentioned in ?
References in periodicals archive ?
This year, the GLAs began work to achieve this by installing eLoran at Dover.
It is rumoured that a decision on whether to continue with eLoran will be made by the government in 2015.
France has already committed to running its two stations until 2020 and has done some trials with the eLoran system.
It's a regional service and we rely on the continued support and interest of other countries to carry on running their signals." No country has yet made the decision to go ahead with eLoran beyond any trial period.
South Korea is setting up an eLoran system, says Williams.
In the UK, policy makers from outside the maritime domain are interested in eLoran because of its ability to transmit data and provide GPS-independent timing.
Potentially, eLoran can be used for applications other than marine navigation.
Prisoner tracking and tagging could also use eLoran. Currently, these systems use GPS, leaving them vulnerable to jammers.
The UK is leading the way with eLoran and the technology has the potential to one day provide a much-needed lifeline in the event of an attack on GPS, says Williams.
The term enhanced Loran, or eLoran, enters the lexicon
Loran could get us out of a jam: a system being developed to aid navigation at sea should prove less vulnerable to attack by jammers than GPS