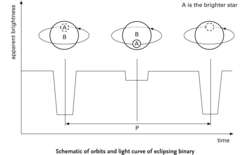 Schematic of orbits and light curve of eclipsing binary

A binary star whose orbital plane is orientated such that each component is totally or partly eclipsed by the other during each orbital period. The effect observed is a periodic decrease in the light from the system (see illustration). The deeper minimum corresponds to the eclipse of the brighter star. The light curve gives the period of revolution, and from the depths and shapes of the minima it is possible to estimate the inclination of the orbital plane. The duration of the eclipses compared to the time between eclipses indicates the radii of the stars in terms of the distance between them. If the system is also a double-lined spectroscopic binary the individual masses and radii of the stars can be calculated.

Eclipsing binaries tend to be composed of large stars with small orbits and therefore the majority are close binaries (see binary star). In these systems mass transfer affects the stars' evolution, leading to three main classes of eclipsing binaries. W Ursae Majoris stars are in contact. In W Serpentis stars one component is transferring mass rapidly to the other. In these two classes the stars are distorted into ellipsoids, an effect that shows in the light curve. Algol variables represent a later stage; mass transfer is almost complete and the stars are nearly spherical.

Feedback
Flashcards & Bookmarks ?
Please log in or register to use Flashcards and Bookmarks. You can also log in with
Flashcards ?
My bookmarks ?
+ Add current page to bookmarks
Mentioned in ?
References in periodicals archive ?
We report on a UBVRI photometry of DE Cvn (RX J1326.9+4532) -- a close (60 pc) eclipsing binary with a possible white dwarf as the secondary component.
DE CVn: An Eclipsing Binary with a White Dwarf?
Hercules X-1 is known as an eclipsing binary X-ray pulsar.
On the threshold of Cherenkov astronomy; radiation of extremely high energy from several celestial objects is leading astronomers to extend their science's spectral range yet again
In 2008, his old Optical Craftsmen telescope helped in the discovery of a new eclipsing binary star (V1047 Persei).
The bright one that got away: fifty years ago this month, the author, then 16, came a hair's breadth from making a huge discovery
et al., 'A study of the distortion wave in the RS CVn eclipsing binary SV Camelopardalis', J.
An investigation of GSC 02038-00293, a suspected RS CVn star, using CCD photometry
"Much of what we know about the sizes of stars comes from such eclipsing binary systems, and most of what we know about the size of planets comes from transits," said lead author and Kepler scientist Laurance Doyle of the SETI Institute.
Double-sun planet like Star Wars' Tatooine discovered
Epsilon Aurigae is a very interesting eclipsing binary system that has been intriguing astronomers for more than 150 years.
The enignmatic Epsilon Aurigae system
Papers and discussions from the workshop describe recent work in areas such as dynamic tides and the evolution of stars in close binaries, eccentric eclipsing binary systems, and equilibrium tides in differentially rotating stars.
Tidal Evolution and Oscillations in Binary Stars: Third Granada Workshop on Stellar Structure, Proceedings
Unexpected (if subtle) changes in this eclipsing binary's period had been known for a century.
75, 50 & 25 years ago
CU Hya is an EA-type eclipsing binary with period, derived from our data, of 0.71907529(9)d and epoch HJD 2455229.41015(4).
CU Hydrae--a neglected bright eclipsing binary star
Washington, May 19 (ANI): Scientists have identified two white dwarf stars in an eclipsing binary system, allowing for the first direct radius measurement of a rare white dwarf composed of pure helium.
Scientists make dwarf star discovery
Skelton were both registered for MScs and are working on eclipsing binary stars under the supervision of Smits.
University of South Africa: Department of Mathematical Sciences--2008 annual report
Well do I remember my first night with a telescopic eclipsing binary star.
RW Tauri, an action-packed eclipser: a flat-bottomed eclipsing binary star shines high near the Pleiades