ecliptic coordinate system, an astronomical coordinate system in which the principal coordinate axis is the ecliptic, the apparent path of the sun through the heavens. The ecliptic poles are the two points at which a line perpendicular to the plane of the ecliptic through the center of the earth strikes the surface of the celestial sphere. The north ecliptic pole lies in the constellation Draco.
The Columbia Electronic Encyclopedia™ Copyright © 2022, Columbia University Press. Licensed from Columbia University Press. All rights reserved. 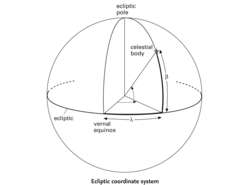 The celestial latitude (β) of a star, etc., is its angular distance (from 0° to 90°) north (counted positive) or south (counted negative) of the ecliptic; it is measured along the great circle through the body and the poles of the ecliptic. The celestial longitude (λ) of a body is its angular distance (from 0° to 360°) from the vernal equinox, measured eastward along the ecliptic to the intersection of the body's circle of longitude; it is measured in the same direction as the Sun's apparent annual motion. Although observations are taken from the Earth's surface the coordinates should strictly be geocentric and, tabulated as such, are universally applicable. A slight correction is therefore applied to convert surface (topocentric) observations to geocentric values.

The ecliptic system is older but less used than the equatorial and horizontal coordinate systems. It is sometimes used to give the positions of the Sun, Moon, and planets. See also heliocentric coordinate system.

[i′klip·tik kō′ȯrd·ən·ət ‚sis·təm]
(astronomy)
A celestial coordinate system in which the ecliptic is taken as the primary and the great circles perpendicular to it are then taken as secondaries.
McGraw-Hill Dictionary of Scientific & Technical Terms, 6E, Copyright © 2003 by The McGraw-Hill Companies, Inc.