[ē′kän·ə‚miz·ər]
(engineering)
A reservoir in a continuous-flow oxygen system in which oxygen exhaled by the user is collected for recirculation in the system.
(mechanical engineering)
A forced-flow, once-through, convection-heat-transfer tube bank in which feedwater is raised in temperature on its way to the evaporating section of a steam boiler, thus lowering flue gas temperature, improving boiler efficiency, and saving fuel.
McGraw-Hill Dictionary of Scientific & Technical Terms, 6E, Copyright © 2003 by The McGraw-Hill Companies, Inc.
The following article is from The Great Soviet Encyclopedia (1979). It might be outdated or ideologically biased.

a component of a boiler unit. An economizer is a heat exchanger in which feed water is heated by flue gases before the water is supplied to the boiler. For a pressure of up to 22 kilograms-force per cm2 (2.2 megapascals) and a feed-water temperature below the dew point of the flue gases or for water that has not been deaerated, an economizer consisting of plain cast-iron tubes or of finned cast-iron tubes is used. For higher temperatures and pressures, an economizer consisting of steel tubes is used; most economizers of this type consist of plain steel tubes. An economizer increases the efficiency of a boiler unit. 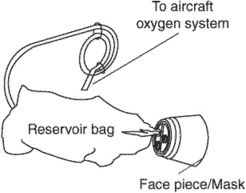 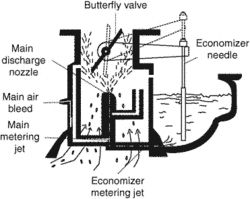 i. A reservoir in a continuous-flow oxygen system in which exhaled oxygen is collected for recirculation in the system. This way the consumption of oxygen is economized.
ii. The system of metering additional fuel in a carburetor or fuel injection system when the throttle is wide open. This additional fuel helps remove some of the heat when the engine is producing maximum power. The system provides an economical fuel-air mixture at all settings except at full power. Also called a power-enrichment system or a fuel economizer system.
An Illustrated Dictionary of Aviation Copyright © 2005 by The McGraw-Hill Companies, Inc. All rights reserved

Feedback
Flashcards & Bookmarks ?
Please log in or register to use Flashcards and Bookmarks. You can also log in with
Flashcards ?
My bookmarks ?
+ Add current page to bookmarks
Mentioned in ?
References in periodicals archive ?
This is due to the benefit of economizer function in the new VC DX-DOAS design and more efficient operation at part-load conditions that occur particularly during cooler and drier times of the year.
Improving Effective Energy-Efficient Commercial Package Dedicated Outside Air Systems Located in Hot-Humid Climate Zones
One key consideration in this arrangement is the fact that the partial economizer mode adds pressure drop above and beyond the original system design because flow must route through both a heat exchanger and a chiller in series.
Waterside Economizer Retrofit for Data Center
The mechanical TXV was used as an expansion device of economizer branch.
Experimental research on eutectic refrigerating system with economizer
For each location, the incremental energy cost savings was found, arriving at a net present value of energy savings for the proposed water economizer addition.
Pre-cooling Chilled Water Return--Replacing Yesterday's Strainer Cycle
[S.sub.A], [S.sub.B], [S.sub.c], [S.sub.D]: The entropies of refrigerant at compressor inlet (KJ/kg*K), compressor outlet (KJ/kg*K), leaving the economizer (KJ/kg*K), and vapor mixture (KJ/kg*K), respectively
Performance evaluation of refrigeration units in natural gas liquid extraction plant
This flux releases the useful output in the heat economizer:
Mathematical model for new type of heat economizer
The economizer damper was configured to be manually controlled using a 2-10 V variable DC voltage source to the motor.
A smart mixed-air temperature sensor
Today, new cooling system technology, particularly economizers and supplemental cooling systems, are available to slash electricity bills substantially.
Cost-effective data center cooling: economizers and supplemental cooling systems are available to slash electricity bills substantially
Due to other system inefficiencies we are currently addressing, the result of these air handlers entering economizer mode is not necessarily less energy used by the system.
An Alternate Take on Airside Economizing
Without the Indirect/Direct Evaporative Cooling components a more conventional AHU (Figure 3), with an air side economizer, will need to introduce 18,811 CFM (8,878.8 L/sec) of outdoor air to achieve the required 60[degrees]F (15.6[degrees]C) supply air DP and will require 68.96 Tons (242.5 KW) of refrigeration, a 26% increase in peak cooling demand.
A heat pipe indirect/direct evaporative cooling/humidification design for natatorium IAQ, and energy savings too
The calibrated model developed by eQuest and discussed before is used for estimating the energy savings that could be resulted by implementing the C[O.sub.2]-based DCV along with the economizer on heat pumps located in classroom and offices.
Energy Analysis of C[O.sub.2]-Based Demand Controlled Ventilation and Economizer for Air Source Heat Pump in Schools
In order to evaluate those effects, both systems were operated in "continuous indoor fan operation without economizer" and "synchronized indoor fan operation with economizer" cases with three indoor set temperatures: 23[degrees]C, 25[degrees]C, and 27[degrees]C (73.4[degrees]F, 77[degrees]F, and 80.6[degrees]F).
Simulation evaluation of the ventilation effect on the performance of a VRV system in cooling mode--part II, simulation evaluation