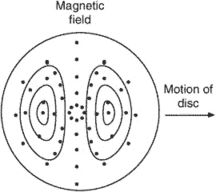 Eddy current which is induced in a disc moving through a nonuniform magnetic field.
A nondestructive testing technique (NDT) that interrogates a component for surface inconsistencies and conditions such as hardness, conductivity, etc. It can only be applied to conductive materials. Eddy current testing generates small alternating magnetic fields on the surface of the component, and these magnetic fields interact with conductive components to generate small eddy currents on the surface. These currents in turn generate their own secondary alternating magnetic fields that interact with the primary fields. By analyzing the interaction, the defects and the changes in the conductivity and the permeability of the surface can be analyzed. The detection limits of the technique depend upon the surface condition of the piece under examination. It is normally not possible to detect defects that are smaller than about three times the surface roughness of the component. The detectable length of defects depends upon the integrity of the scan pattern.
An Illustrated Dictionary of Aviation Copyright © 2005 by The McGraw-Hill Companies, Inc. All rights reserved

Feedback
Flashcards & Bookmarks ?
Please log in or register to use Flashcards and Bookmarks. You can also log in with
Flashcards ?
My bookmarks ?
+ Add current page to bookmarks
References in periodicals archive ?
This AD would require repetitive high frequency eddy current inspections to find cracking of the bulkhead frame support at body station 2598 under the hinge support fittings of the horizontal stabiliser, and repair if cracking is found.
FAA publishes new airworthiness directives
This AD would require an eddy current inspection to detect cracks in the upper girder of the two main landing gear brackets (MLG) and repair of a cracked bracket followed by repetitive inspections, or replacement of a cracked MLG bracket with an improved bracket as applicable.
The US FAA proposes new airworthiness directives
With three locations in Hollywood, Florida; Orlando, Florida; and Cincinnati, Ohio; the company specializes in Radiographic (X-ray and Gamma), Fluorescent Penetrant, Ultrasonic, Magnetic Particle, and Eddy Current Inspections, as well as holding approvals for these processes from Honeywell Aerospace, Lockheed Martin, General Electric, Collins Aerospace, Pratt and Whitney, Cessna, Eaton, Aerojet Rocketdyne, and Rolls-Royce, among others.
Sintavia Acquires Non-Destructive Testing Services Provider QC Laboratories
The existing AD requires repetitive visual and high frequency eddy current inspections to detect cracking of the corners of the door frame and the cross beams of the aft cargo door, and corrective actions if necessary.
FAA issues new Boeing airworthiness directives
The AD requires measuring the diameter of the hole counterbore of the outboard idler hinge fitting of the left and right wing flap; the performance of repetitive high frequency eddy current inspections to detect cracks at the flap idler hinge fitting if necessary and replacement of the flap idler hinge fitting with a new like part if any crack is detected.
US FAA adopts airworthiness directive related to certain DC-9 and C-9 aircraft
Under the amendment, which is effective from 9 May 2000, repetitive high frequency eddy current inspections are required, together with corrective actions where necessary.
FAA issues final rule on Boeing door frame/cross beam
This AD requires conducting repetitive, high-frequency eddy current inspections to detect cracks on the locking pin fittings of the baggage door and locking pin housings of the fuselage, as well as repetitive detailed visual inspections to detect cracks of the inner door structure on all four door locking attachment fittings and corrective actions if necessary.
FAA proposes new airworthiness directives
Encyclopedia browser ?
Full browser ?
CITE
Site: Follow: Share:
Open / Close