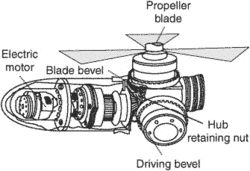 A propeller in which pitch is changed electrically.
An Illustrated Dictionary of Aviation Copyright © 2005 by The McGraw-Hill Companies, Inc. All rights reserved

Feedback
Flashcards & Bookmarks ?
Please log in or register to use Flashcards and Bookmarks. You can also log in with
Flashcards ?
My bookmarks ?
+ Add current page to bookmarks
Mentioned in ?
References in periodicals archive ?
The experiments were the: Electric Play Dough, Stone from Milk, Wind Turbine, Simple Electric Propeller Car and Coloring Machine.'I really enjoyed making our Science Project.
Scene City: Science around me
It received a major mid-life upgrade in 2009, in which its four diesel engines and electric propeller engines were replaced, according to specialist publication Jane's Sentinel.
'Explosion' detected near Argentine sub's last known location
That maintenance included the replacement of its four diesel engines and its electric propeller engines, according to specialist publication Jane's Sentinel.
Argentina's Navy Says Sonar Noise Not Come from Submarine Missing in South Atlantic
For comparison purposes, the electric propeller motors of the QE2 are each 44 MW.
Commercial plans for electric airplanes
Making coffee, a staple for most caffeine devotees, is a typical morning chore requiring the switch of an electric propeller grinder.
Valentine's sale channels love through nostalgia
Their imagination and brain power were also tested as they designed and made a boat with an electric propeller and created a solar-powered fan.
class act: The page that puts your kids in the spotlight
A single cellphone battery powers the servos, as well as a telemetry receiver, video camera, transmitter, and electric propeller motor.
Dip, turn, and dive
The bike is equipped with one seat and four horizontally mounted electric propellers that are controlled by a pair of joysticks.
The Age Of The Hoverbikes Is Finally Here
The Solar Impulse, which runs on four electric propellers powered by an array of solar cells mounted on the plane's 63 meter (206 foot) wingspan, had lifted off just before dawn Saturday from Washington Dulles International Airport.
Solar airplane lands in New York, ends US trip
The new ships will introduce technology such as electric propellers and the integration of propeller and rudder that will make the ships highly maneuverable, more eco-friendly and quieter.
Travel Business News - Asia / Pacific
The plane, which runs on four electric propellers powered by 12,000 solar cells mounted on the plane's 63-meter wingspan, touched down in the dark at Dulles International Airport at 12.15 am (1415 GMT).
Solar plane ends US tour in Washington