[i¦lek·trik ¦rō‚tād·iŋ mə‚shēn·rē]
(electricity)
Any form of apparatus which has a rotating member and generates, converts, transforms, or modifies electric power, such as a motor, generator, or synchronous converter.
McGraw-Hill Dictionary of Scientific & Technical Terms, 6E, Copyright © 2003 by The McGraw-Hill Companies, Inc.

An electric machine can be constructed on the principle that a magnet will attract a piece of permeable magnetic material such as iron or magnetic steel. In illus. a, a pole structure is shown along with a magnetic block that is allowed to rotate. The magnetic block will experience a torque tending to rotate it counterclockwise to the vertical direction. This torque called a reluctance or saliency torque, will be in the direction to minimize the reluctance of the magnetic circuit. In illus. b, a winding is added to the rotor (the part which is allowed to rotate). In this case there is an additional torque on the rotor in the counterclockwise direction produced by the attraction of opposite poles. This torque will be approximately proportional to the sine of the angle Θ. While the magnets in the illustration are electromagnets, permanent magnets could be used with the same effect. See Magnet, Windings in electric machinery 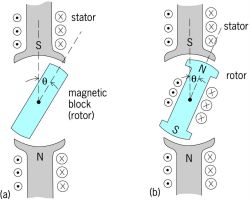 The induction machine is another alternating-current machine which runs close to synchronous speed. The alternating-current winding of the stator is similar to that of the synchronous machine. The rotor may have an insulated winding (wound rotor) but more commonly consists of uninsulated bars embedded in a laminated structure and short-circuited at the end (squirrel cage). There is normally no voltage applied to the rotor. The voltages are produced by means of Faraday's law of induction. In an induction motor the stator-produced flux-density wave rotates slightly faster than the rotor during normal operation, and the flux linkages on the rotor therefore vary at low frequency. The rotor currents induced by these time-varying flux linkages produce a magnetic field distribution that rotates at the same speed as the stator-produced flux wave. See Induction motor