A general term for the luminescence excited by the application of an electric field to a system, usually in the solid state. Solid-state electroluminescent systems can be made quite thin, leading to applications in thin-panel area light sources and flat screens to replace cathode-ray tubes for electronic display and image formation. See Luminescence

Modern interest in electrolumi­nescence dates from the discovery by G. Destriau in France in 1936 that when a zinc sulfide (ZnS) phosphor powder is suspended in an insulator (oil, plastic, or glass ceramic) and an intense alternating electric field is applied with capacitorlike electrodes, visible light is emitted. The phosphor, prepared from zinc sulfide by addition of a small amount of copper impurity, was later shown to contain particles of a copper sulfide (Cu2S) phase in addition to copper in its normal role as a luminescence activator in the zinc sulfide lattice. The intensification of the applied electric field by the sharp conductive or semiconductive copper sulfide inhomogeneities is believed to underlie the mechanism of Destriau-type electroluminescence. Minority carriers are ejected from these high-field spots into the low- or moderate-field regions of the phosphor, where they recombine to excite the activator centers. The structure of a Destriau-type electroluminescent cell is shown in the illustration; the light is observed through the transparent indium–tin oxide electrode. 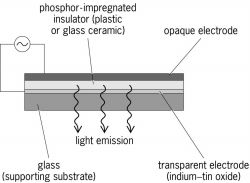 The application of electroluminescence to display and image formation received great impetus from work in the late 1960s and mid-1970s on thin-film electroluminescence (TFEL), giving rise to devices that are different in structure and mechanism from the Destriau conditions. The phosphor in these devices is not a powder but a thin (about 500 nanometers) continuous film prepared by sputtering or vacuum evaporation. The luminescence activators are manganese or rare-earth ions, atomic species with internal electronic transitions that lead to characteristic luminescence. The phosphor film does not contain copper sulfide or any other separate phase, and is sandwiched between two thin (about 200 nm) transparent insulating films also prepared by evaporative means. Conducting electrodes are applied to the outside of each insulating film; one of the electrodes is again a transparent coating of indium–tin oxide on glass, which serves as supporting substrate. If an imaging matrix is desired, both electrodes consist of grids of parallel lines, with the direction of the grid on one insulator (row) orthogonal to the other grid (column). By approximate circuitry the entire matrix can be scanned, applying voltage where desired to a phosphor element that is located between the intersection of a row and column electrode. A thin-film electroluminescent device acts like a pure capacitor at low applied voltage; no light is emitted until the voltage reaches a threshold value determined by the dielectric properties of the insulator and phosphor films. Above this threshold a dissipative current flows, and light emission occurs. The brightness increases very steeply with the applied voltage but is finally saturated. The light output, or average brightness, is roughly proportional to the frequency up to at least 5 kHz, and also depends on the waveform of the applied voltage.

Injection electroluminescence results when a semiconductor pn junction or a point contact is biased in the forward direction. This type of emission, first observed from silicon carbide (SiC) in 1907, is the result of radiative recombination of injected minority carriers, with majority carriers being a material. Such emission has been observed in a large number of semiconductors. The wavelength of the emission corresponds to an energy equal, at most, to the forbidden band gap of the material, and hence in most of these materials the wavelength is in the infrared region of the spectrum. If a pn junction is biased in the reverse direction, so as to produce high internal electric fields, other types of emission can occur, but with very low efficiency. See Semiconductor, Semiconductor diode

Light emission may also occur when electrodes of certain metals, such as Al or Ta, are immersed in suitable electrolytes and current is passed between them. In many cases this galvanoluminescence is electroluminescence generated in a thin oxide layer formed on the electrode by electrolytic action. In addition to electroluminescence proper, other interesting effects (usually termed electrophotoluminescence) occur when electric fields are applied to a phosphor which is concurrently, or has been previously, excited by other means. These effects include a decrease or increase in steady-state photoluminescence brightness when the field is applied, or a burst of afterglow emission if the field is applied after the primary photoexcitation is removed. See Photoluminescence

luminescence excited by an electric field. Such luminescence is observed in gases or crystal phosphors whose atoms or molecules undergo a transition to an excited state when some type of electric discharge occurs.

High-field electroluminescence is observed in, for example, ZnS powder that is doped with particles of a metal, such as Cu or Al, and that is embedded in a dielectric between the plates of a capacitor to which an alternating voltage is supplied. In each half-cycle, a region containing an intense electric field is formed on the sides of a ZnS crystal that face the cathode. Electrons emitted into the high-field region from the surface of the crystal are accelerated by the field and ionize atoms of the crystal lattice. The holes produced are trapped by luminescent centers. In each alternate half-cycle, the field is oriented in the opposite direction and causes the electrons to return to the luminescent centers, where they recombine with the holes to produce luminescence.

The electroluminescence of solids is used for display units based on electroluminescent panels (see Figure 1) or on light-emitting diodes. Such units include symbolic displays with luminescent numerals, letters, and other characters that may be changed by switching contacts. They also include matrix displays for the production of complex luminescent images (see), graphic panels, and image converters.

[i¦lek·trō‚lü·mə′nes·əns]
(electronics)
The emission of light, not due to heating effects alone, resulting from application of an electric field to a material, usually solid.
McGraw-Hill Dictionary of Scientific & Technical Terms, 6E, Copyright © 2003 by The McGraw-Hill Companies, Inc.

The emission of light from a phosphor excited by electromagnetic energy.
McGraw-Hill Dictionary of Architecture and Construction. Copyright © 2003 by McGraw-Hill Companies, Inc.

The generation of light by applying electricity to a material such as a semiconductor or phosphor. LEDs, OLEDs, laser diodes and electroluminescent displays are examples. See LED, OLED, laser diode and EL display.
Copyright © 1981-2019 by The Computer Language Company Inc. All Rights reserved. THIS DEFINITION IS FOR PERSONAL USE ONLY. All other reproduction is strictly prohibited without permission from the publisher.

Feedback
Flashcards & Bookmarks ?
Please log in or register to use Flashcards and Bookmarks. You can also log in with
Flashcards ?
My bookmarks ?
+ Add current page to bookmarks
Mentioned in ?
References in periodicals archive ?
Also referred to as organic electroluminescence elements or organic light-emitting diodes (OLED).
TANAKA Develops 70 degrees C Low-temperature Sintering Technology using Silver Nano Ink and Full-surface Silver Metal Film Forming Technology using Etching Processes
This shows that the solar module slightly affected by PID could not be identified by the thermographic and electroluminescence images because of limitations in accuracy.
Investigation on Potential-Induced Degradation in a 50MWp Crystalline Silicon Photovoltaic Power Plant
Yao, "Photoluminescence and electroluminescence from tris(8-hydroxyquinoline)aluminum nanowires prepared by adsorbent-assisted physical vapor deposition," Advanced Functional Materials, vol.
Formation of Flower-Like Crystals of Tris(8-hydroxyquinoline)aluminum from 8-Hydroxyquinoline on Anodic Porous Alumina
Koyama, "Visible electroluminescence from porous silicon," Applied Physics Letters, vol.
Porous Silicon and Indium Doped Zinc Oxide Junctions: Synthesis, Characterization, and Application to Electroluminescent Devices
Botta, "Electroluminescence from conjugated polymer electrospun nanofibers in solution processable organic light-emitting diodes," ACS Nano, vol.
Polarized Emission from Conjugated Polymer Chains Aligned by Epitaxial Growth during Off-Center Spin-Coating
The barrier energy differences ([DELTA][E.sub.e] - [DELTA][E.sub.h]) of the polyoxadiazoles I and II are lower than those of poly(p-phenylene-vinylene) (PPV), one of the most used polymer in electroluminescence devices.
Optical and electrochemical properties of thermostable polymers containing light-emitting units
Section 5 describes our two electroluminescence prototypes, NEXT-DEMO and NEXT-DBDM.
Present status and future perspectives of the NEXT experiment
These devices operate based on transitions mediated by DPPs, and the center wavelength of the electroluminescence (EL) spectrum is determined by the wavelength of the light source used for creating the DPPs.
Emission spectral control of a silicon light emitting diode fabricated by dressed-photon-phonon assisted annealing using a short pulse pair
The instrument panel did not use regular bulbs to light the gauges, but electroluminescence to illuminate the four chromeA[degrees] ringed circular dash pods, neeA[degrees] dles, radio and shifterA[degrees]position indicator in the console.
CAR THROUGH THE YEARS
The three research papers investigate the photoluminescence and electroluminescence of copper-doped zinc sulphide nanocrystals, the effect of magnetic field on the growth of aligned carbon nanotubes, and the antibacterial activity of gold and silver nanoparticles grown from red algae.
Functional nanomaterials and their applications; special topic volume with invited peer reviewed papers
is planning to develop technology for commercial mass production of organic electroluminescence panels for next-generation televisions by March 2016, industry sources said Tuesday.
Kyodo Industry Brief (April 10) -1-
Effect of multi-walled carbon nanotubes on electron injection and charge generation in AC field-induced polymer electroluminescence. Organ Electr 14(1):8-18 (2013); http://dx.doi.org/10.1016/j.orgel.2012.10.017.
NYC fish is often mislabeled