[i′lek‚trän ‚gən]
(electronics)
An electrode structure that produces and may control, focus, deflect, and converge one or more electron beams in an electron tube.
McGraw-Hill Dictionary of Scientific & Technical Terms, 6E, Copyright © 2003 by The McGraw-Hill Companies, Inc.
The following article is from The Great Soviet Encyclopedia (1979). It might be outdated or ideologically biased.

a device for the production of streams of electrons (electron beams) in a region from which air has been removed (a vacuum).

The electrons in an electron gun are emitted from a cathode and are accelerated by an electric field (Figure 1). Electron emission from the cathode occurs primarily through thermionic emission, emission from a plasma, field emission, and photoemission. The formation of a specific electron beam distribution at the exit of an electron gun is governed by the selection of the electric and magnetic field configurations and strengths and is the subject of electron optics (see).

The term “electron gun” may be applied both to devices for forming high-intensity electron beams (high-current electron guns) and to simpler arrangements of electrodes for producing low-intensity beams, which are used in klystrons, magnetrons, and electron-beam devices; in the Soviet literature, these simpler arrangements are often referred to as electron projectors (elektronnye prozhektory). The designs and parameters of low-current electron guns are extremely varied. A diagram of one type is shown in Figure 2. Electron guns are used extensively in technology and scientific research, particularly in television systems, electron microscopes, image converters, metal-melting and welding equipment, and equipment for the excitation of gas lasers. The currents of electron beams in low-current electron guns may have values ranging from tens of microamperes to tens of amperes, and the electron energies may reach hundreds of kilo-electron volts.

High-current electron guns are two-electrode devices (diodes) capable of generating electron beams with much higher currents (up to 104–107 amperes); the accelerated electrons have energies up to 10–20 megaelectron volts, and the power rating is ≲1013watts. Cold cathodes that exhibit explosive electron emission are normally used in a high-current electron gun at current densities of ≳ kiloampere per cm2. Such brief, intense emission occurs upon the heating and explosion of micropeaks on the surface of the cathode by the field emission current. The ionization of vapor leads to formation near the cathode surface of a dense plasma and to an increase by a factor of 103–104 in the average emission current density. The plasma near the cathode expands toward the anode with a velocity v = 2–3 × 106 cm/sec and closes the diode circuit consisting of a cathode and an anode in a time d/v (where d is the cathode-anode distance), thereby limiting the duration of the beam current across the diode to times of ~10–8–10–6 sec.

At low currents and in the absence of a tenuous plasma between the cathode and the anode, the motion of electrons in a high-current electron gun is similar to the motion in a low-current electron gun, with allowance for relativistic corrections. The distinguishing feature of electron guns operating in high-current modes lies in the strong influence exerted by the magnetic field of the beam on the electron trajectories. Calculation shows that at a diode current

(Figure 3, where e is the total energy of the electrons at the anode and mc2 is the rest energy; seeRELATIVITY, THEORY OF), the magnetic field of the electron flow turns the electrons toward the axis of the flow and compresses the flow toward the center of the anode. Compression of the beam at the anode results in a screening of the central cathode region by the space charge of the beam. As a result, electrons are emitted mainly by the edge of the cathode, which can be easily seen in Figure 3. The effect of compression is most pronounced if the space charge and its electric field are partially compensated by the plasma ions filling the axis region of the diode or covering the anode surface. The plasma in the diode is produced either by means of external sources or as a result of heating of the anode by the electron beam. In the latter case, the current density of the focused beam on the anode reaches 106–108amperes per cm2, and the energy flux density is ≲1013 watts per cm2. The beam in this case can only by convention be called a beam, since the transverse velocity of the electrons is comparable to the longitudinal velocity. 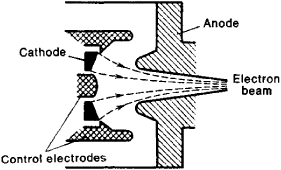 If there is a layer of dense plasma on the anode, the ions are accelerated toward the cathode by the electric field, and the current in the diode is transported by both electrons and ions. Theory and calculations, confirmed by experiments, predict that as a result of the interaction of the magnetic field with the electrons, the electron current ceases increasing with increasing Rid (in contrast to the ion current). This opens up the possibility of producing ion beams with a current of ≳106 amperes in high-current electron guns. The effect of suppression of electron currents on the periphery of the diode by means of magnetic fields, which may be called magnetic insulation, is used in the vacuum transmission lines that connect the power supply to the diode of the electron gun; the lines can withstand an electric field strength of ≲4 × 106 watts per cm without breakdown.

High-current electron guns are used to heat plasmas, to provide collective acceleration of charged particles, to produce bremsstrahlung and neutron fluxes, and to generate microwave oscillations and laser radiation. They are also employed in research in solid-state physics.

A device that creates a fine beam of electrons that is focused on a phosphor screen in a CRT.
Copyright © 1981-2019 by The Computer Language Company Inc. All Rights reserved. THIS DEFINITION IS FOR PERSONAL USE ONLY. All other reproduction is strictly prohibited without permission from the publisher.

Feedback
Flashcards & Bookmarks ?
Please log in or register to use Flashcards and Bookmarks. You can also log in with
Flashcards ?
My bookmarks ?
+ Add current page to bookmarks
Mentioned in ?
References in periodicals archive ?
When the positive voltage is applied, on-board cold cathode electron guns are needed to remove the excess electrons to maintain the positive voltage of the tether.
ESTCube-1 nanosatellite for electric solar wind sail in-orbit technology demonstration/Nanosatelliit ESTCube-1 elektrilise paikesepurje tehnoloogia naitamiseks orbiidil
In [3] mathematical model of the electron gun automatic current control system on basis of HVGD is presented, in which an electromagnetic leak with a dosing device is used, made in the form of an axially symmetrically located seat with a flat compacting surface and a hole for flow of gas in the center, and a movable stock with a flat end surface on the side of the seat.
Automatic control of current of gas-discharge electron gun with cold cathode
This, coupled with a redesigned S-NX DBF electron gun for reduced spot size and screen focus uniformity, and improved deflection yoke technology for improved beam landing, especially in the corners, provides flat, sharp, and bright flat monitors.
MITSUBISHI ELECTRONICS LAUNCHES 19" FLAT CRT
Traditional TV and computer screens are bulky because they shoot electrons from an electron gun to light up a phosphorescent screen.
Diamonds promise new benefits
These features usually dictate that the TWTs have helix slow-wave circuits (with a velocity taper to improve both linearity and efficiency), high area compression ungridded electron guns, PPM focusing, multiple stage depressed collectors, and conduction cooling.
US TWTs from 1 to 100/GHz
The CDHS is able to switch the high voltage on or off and select which of the electron guns, if any, are operational.
E-sail test payload of the ESTCube-1 nanosatellite/Elektrilise paikesetuulepurje katsetusmoodul nanosatelliidi ESTCube-1 pardal
A new main control panel of the installation (Figure 2) is installed, which is based on new units of the electron gun control (Figure 3), developed by <<Solo>> Ltd (Kiev, Ukraine) that fulfill usual functions (control movement of the electron beams, focusing of the beams, and operation of the working gas leaks).
Reconstruction of electron beam installation TICO-15m
In the positive mode, the electron removal can be performed by electron guns. The current rating of electron guns is dependent upon the current in the tether.
Accommodating the plasma brake experiment on-board the Aalto-1 satellite/Plasmapiduri eksperimendi sobitamine Aalto-1 satelliidile
Two principally different systems of electron guns for melting of metal are known: without an acceleration anode (with a ring cathode) and with it.
Titanium. Problems of production. Prospects. Analytical review. Part 3
Installation UE-5812 is equipped with electron guns of axial type <<Paton-300>> (Figure 3), located on upper cover of the melting chamber [1].
Commercial electron beam installation UE-5812