The process in which an electron, which has been excited from the valence band to the conduction band of a semiconductor, falls back into an empty state in the valence band, which is known as a hole. See Band theory of solids

Light with photon energies greater than the band gap can be absorbed by the crystal, exciting electrons from the filled valence band to the empty conduction band (illus. a). The state in which an electron is removed from the filled valence band is known as a hole. It is analogous to a bubble in a liquid. The hole can be thought of as being mobile and having positive charge. The excited electrons and holes rapidly lose energy (in about 10-12 s) by the excitation of lattice phonons (vibrational quanta). The excited electrons fall to near the bottom of the conduction band, and the holes rise to near the top of the valence band, and then on a much longer time scale (of 10-9 to 10-6 s) the electron drops across the energy gap into the empty state represented by the hole. This is known as electron-hole recombination. An energy approximately equal to the band gap is released in the process. Electron-hole recombination is radiative if the released energy is light and nonradiative if it is heat. See Phonon 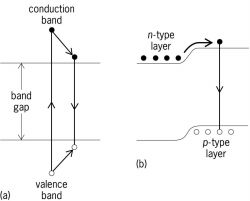 Electron-hole recombination requires an excited semiconductor in which both electrons and holes occupy the same volume of the crystal. This state can be produced by purely electrical means by forward-biasing a pn junction. The current passing through a pn diode in electrons per second equals the rate of electron-hole recombination (illus. b). A major application of this phenomenon is the light-emitting diode. See Light-emitting diode, Luminescence, Semiconductor diode

Apart from its application in light-emitting diodes and laser operation, radiative recombination, especially at low temperatures (approximately 2 K or -456°F), has been a very important tool for studying the interaction of electrons and holes in semiconductor crystals. See Exciton

[i′lek‚trän ′hōl rē‚käm·bə′nā·shən]
(solid-state physics)
The process in which an electron, which has been excited from the valence band to the conduction band of a semiconductor, falls back into an empty state in the valence band, which is known as a hole.
McGraw-Hill Dictionary of Scientific & Technical Terms, 6E, Copyright © 2003 by The McGraw-Hill Companies, Inc.