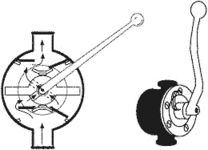 When the handle of the wobble pump is operated, the negative pressure created on one side pulls upwards lifts the lower flapper, allowing the fuel to flow behind it. As the handle is moved in the opposite direction, the lower flapper closes, preventing the fuel from escaping back into the line and causing it to flow through the passage shown by the arrows. The fuel is then forced through the upper flapper on the opposite side by the upward movement of opposite end of the wobble blade, thence to the carburetor. The cycle is repeated each time the handle is moved in either direction.
A hand-operated fluid pressure pump for moving fluids such as gasoline, hydraulic fluid, or oil by a back-and-forth movement of the pump handle. The most common use is in a reciprocating engine where the wobble pump is used to build up fuel pressure before starting. Also known as an emergency hand pump.
An Illustrated Dictionary of Aviation Copyright © 2005 by The McGraw-Hill Companies, Inc. All rights reserved

Feedback
Flashcards & Bookmarks ?
Please log in or register to use Flashcards and Bookmarks. You can also log in with
Flashcards ?
My bookmarks ?
+ Add current page to bookmarks
Mentioned in ?
References in periodicals archive ?
The only real redundancy built into the Cardinal RG's landing gear system is its emergency hand pump. For example, there's only one set of lines, one nose gear actuator, one main gear actuator and no backup reservoir (the system's reservoir isn't depicted and is incorporated into the power pack).
Pressure at work: from simple brakes to landing gear and even to primary controls, your aircraft probably has a hydraulic system relying on you for its care and feeding
The report shows that as the pilot came to the final approach to land, the landing gear failed to operate and four further attempts were made to lower the gear using an emergency hand pump.
Crash-landing plane had just been serviced