[i′mid·ər ‚fäl·ə·wər]
(electronics)
A grounded-collector transistor amplifier which provides less than unity voltage gain but high input resistance and low output resistance, and which is similar to a cathode follower in its operations.
McGraw-Hill Dictionary of Scientific & Technical Terms, 6E, Copyright © 2003 by The McGraw-Hill Companies, Inc.

A circuit that uses a common-collector transistor amplifier stage with unity voltage gain, large input resistance Ri, and small output resistance Ro (see illustration). In its behavior, the emitter follower is analogous and very similar to the source follower in metal-oxide-semiconductor (MOS) circuits. Many electronic circuits have a relatively high output resistances and cannot deliver adequate power to a low-resistance load, or do suffer unacceptable voltage attenuation. In these cases, an emitter follower acts as a very simple buffer. Widely used, it is often found as the last stage of a multistage amplifier so that the circuit is better able to drive a low-resistance load. See Amplifier 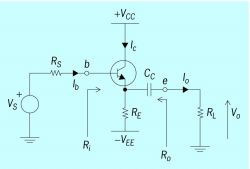