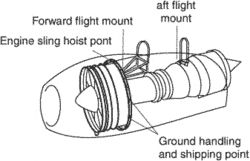 The structure that supports the engine in the airframe. It usually includes shock mounts. Engine mounts are part of the airframe.
An Illustrated Dictionary of Aviation Copyright © 2005 by The McGraw-Hill Companies, Inc. All rights reserved

Feedback
Flashcards & Bookmarks ?
Please log in or register to use Flashcards and Bookmarks. You can also log in with
Flashcards ?
My bookmarks ?
+ Add current page to bookmarks
Mentioned in ?
References in periodicals archive ?
The Cessna 150/152 series utilize a different method in which the strut is attached to the tubular steel engine mount. Thankfully, it's quite rugged and designed well for the training environment.
Hard-Landing Damage: Firewall, Gear Repairs: Hard landings happen, but major damage to the airframe can go unnoticed. Look closely for firewall, landing gear and wheel damage when shopping used airplanes
India, July 29 -- The HondaJet Over-The-Wing Engine Mount (OTWEM) configuration, natural-laminar flow wing and fuselage nose, and composite fuselage were developed from long-term research activities.
First Production HondaJet Makes Public Debut
Multi-objective robust optimization design of vehicle engine mount systems, Qiche Gongcheng/Automotive Engineering, 35(10): 893-897.
Predicted transmissibility of an experimental approach for a laminated rubber-metal spring
In this method the response in target point in vehicle compartment is determined by multiplication of interface loading and transfer function from engine mount to that target point.
Vibration transfer path analysis and path ranking for NVH optimization of a vehicle interior
I've never given my engine mounts a second thought until my Acura mechanic advised me that my 2001 MDX with 95,000 gently acquired miles was showing "engine mount wear'' and that the front and side engine mounts "ought to be replaced.'' This is my lovingly maintained and leisurely driven luxo-truck, which has never experienced anything akin to an off-road experience or even modest abuse.
How to check for worn motor mounts
Case in point: cutting the weight of an engine mount by 30%.
Taking mass out of engine mounts
The fan frame is one of the most complex parts of an aircraft engine, in that the entire engine is attached to the aircraft through the fan frame engine mount lugs.
Fan frame weight reduction success
Then use the engine mount release to make sure the bracket opens and closes completely before reinstalling the powerpack.
Claw cleaning critical
A swinging engine mount provides complete access to all major servicing components.
Industrial rider sweeper/scrubber