entasis (ĕnˈtəsĭs) [Gr.,=stretching], the slight convex curvature of a classical column that diminishes in diameter as it rises. This device, as used by Greek builders, was of extreme subtlety, the freehand curvature being merely sufficient to guard the contours of the column from any appearance of inward sagging. In the Doric columns of the Parthenon, 34 ft (10.3 m) high and 6 ft 3 in. (1.9 m) in diameter at the bottom, the total convexity amounts to only 3-4 in. (1.91 cm). In Greek Doric columns the entasis began at the foot, but in the Roman orders it was confined to the upper two thirds of the column.
The Columbia Electronic Encyclopedia™ Copyright © 2022, Columbia University Press. Licensed from Columbia University Press. All rights reserved.

Intentional slight curvature given to the vertical profile of a tapered column to correct the optical illusion that it appears thinner in the middle if the sides are left straight.
Illustrated Dictionary of Architecture Copyright © 2012, 2002, 1998 by The McGraw-Hill Companies, Inc. All rights reserved
The following article is from The Great Soviet Encyclopedia (1979). It might be outdated or ideologically biased.

in architecture, a convexity in the shaft of a column, usually located in the lower third of the column. It lends the impression of strength to the column and eliminates the optical illusion of concavity.

[′en·tə·səs]
(architecture)
The slight swelling visible in the profile of a column, used to correct the visual distortion that makes a straight column seem to have a concave profile.
McGraw-Hill Dictionary of Scientific & Technical Terms, 6E, Copyright © 2003 by The McGraw-Hill Companies, Inc. 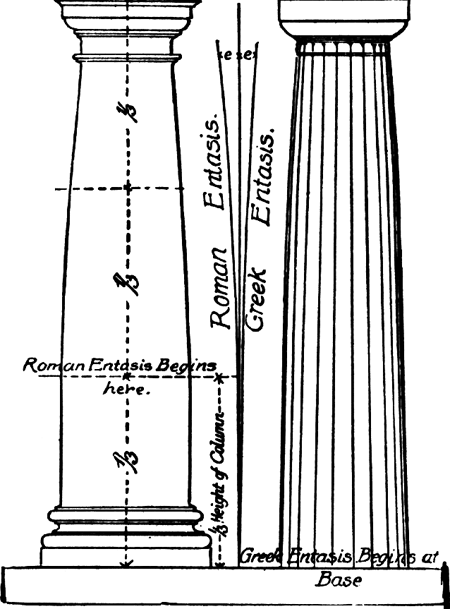 entasis: proportions are much exaggerated
The intentional slight convex curving of the vertical profile of a tapered column; used to overcome the optical illusion of concavity that characterizes straightsided columns.
McGraw-Hill Dictionary of Architecture and Construction. Copyright © 2003 by McGraw-Hill Companies, Inc.