[in¦vī·ərn¦mənt·əl kən′trōl ‚sis·təm]
(engineering)
A system used in a closed area, especially a spacecraft or submarine, to permit life to be sustained; the system provides the occupants with a suitably controlled atmosphere to permit them to live and work in the area.
McGraw-Hill Dictionary of Scientific & Technical Terms, 6E, Copyright © 2003 by The McGraw-Hill Companies, Inc. 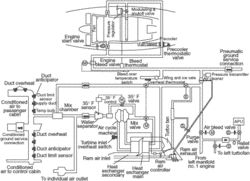 The system that controls the environment in which the occupants of the aircraft function. It includes the supplemental oxygen, air-conditioning, heaters, and pressurization systems, and any other feature that makes it comfortable for occupants at all altitudes.
An Illustrated Dictionary of Aviation Copyright © 2005 by The McGraw-Hill Companies, Inc. All rights reserved