(ĭfĕm`ərĭs) (pl., ephemerides), table listing the position of one or more celestial bodies for each day of the year. The French publication Connaissance de Temps is the oldest of the national astronomical ephemerides, founded in 1679. The Nautical Almanac and Astronomical Ephemeris (usually abbreviated to the Nautical Almanac), an annual publication by the Royal Observatory at Greenwich from 1767 and the Nautical Alamanac Office (now part of the United Kingdom Hydrographic Office) from 1832, was a leading compilation of ephemerides from its inception. Its original purpose was to provide the astronomical information necessary to derive longitude at sea. In 1852 the U.S. Naval Observatory began publishing a book called the American Ephemeris and Nautical Almanac, which contained similar information to that published at Greenwich but adjusted for the meridian at Washington, D.C. Beginning with the edition for 1958, Great Britain and the United States, in a joint effort, issued ephemerides that are identical in content, although they remained separate publications with different names (the British volume was renamed The Astronomical Ephemeris); in 1981 the British and American publications were combined as The Astronomical Almanac. (A version is also now available online.) This ephemeris (adapted to the Greenwich meridian) is issued well in advance of the dates covered and contains such information as the daily right ascension and declination of the sun, moon, planets, and other celestial bodies, and daily data on the sunrise, sunset, moonrise, and moonset. Among other publications issued are The Ephemeris (U.S.) and The Star Almanac for Land Surveyors (Brit.), which are star ephemerides used by surveyors, and the Air Almanac (Brit./U.S.), used in air navigation. By international agreement the basic calculations of astronomical ephemerides are shared among a number of countries including France, Germany, Spain, and Russia. The Ephemerides of Minor Planets is compiled and published annually by the Institute of Theoretical Astronomy, St. Petersburg (formerly Leningrad). In addition, the International Astronomical Union issues ephemerides for every newly discovered comet and for many newly found asteroids. Through the Minor Planet Center in Cambridge, Mass., astronomers can obtain ephemerides of any asteroid or comet.
The Columbia Electronic Encyclopedia™ Copyright © 2013, Columbia University Press. Licensed from Columbia University Press. All rights reserved. www.cc.columbia.edu/cu/cup/

(i-fem -ĕ-riss) (plural: ephemerides)
1. A work published regularly, usually annually, in which are tabulated the daily predicted positions of the Sun, Moon, planets, etc., for that period, together with information relating to certain stars, times of eclipses, etc. It is used in astronomical observation and navigation. See also Astronomical Almanac.
2. A series of predicted geocentric positions of a celestial object at constant intervals of time.
Collins Dictionary of Astronomy © Market House Books Ltd, 2006

An ephemeris (pl., ephemerides) is an astronomical/astrological almanac listing the daily positions of the Sun, the Moon, and the planets, as well as other information, including, in astrological ephemerides, certain information necessary for calculating an astrological chart. The word is derived from the Greek ephemeros, meaning “existing no longer than a day,” from which the word “ephemeral” is also derived.

The use of such tables is very old, and ephemerides are used by navigators, astronomers, and astrologers. During the nineteenth century and the early twentieth century, most of the readily available ephemerides listed planetary positions for noon at Greenwich, England (0° longitude). By the late twentieth century, however, ephemerides had proliferated to the point that tables of planetary positions for midnight Greenwich Mean Time and noon and midnight Eastern Standard Time (North America), sidereal ephemerides, and heliocentric (Sun-centered) emphemerides were all readily available. The personal computer revolution has partially eliminated the need for such tables, as ephemerides have been incorporated into chart-casting programs.

a table or collection of tables containing the values of variable astronomical quantities computed for a series of consecutive moments of time. The most commonly used ephemerides contain the coordinates of stars, planets, comets, artificial earth satellites, and the like and are used in observations of these celestial objects. Special ephemerides also contain information on the velocities of celestial objects and their brightness and other information necessary to organize observations. Ephemerides are computed on the basis of the mathematical theories of the motion of celestial objects.

[ə′fem·ə·rəs]
(astronomy)
A periodical publication tabulating the predicted positions of celestial bodies at regular intervals, such as daily, and containing other data of interest to astronomers. Also known as astronomical ephemeris.
McGraw-Hill Dictionary of Scientific & Technical Terms, 6E, Copyright © 2003 by The McGraw-Hill Companies, Inc. 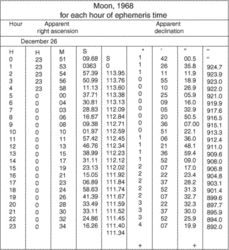 i. A periodical publication tabulating the predicted positions of celestial bodies at regular intervals, such as daily, and containing other data of interest to astronomers. A publication giving similar information useful to a navigator is called an almanac. An extract of an ephemeris table is shown in the illustration.
ii. A great-circle path scribed on the celestial sphere by the passage of a celestial body or satellite. The path or predicted path of a satellite.
An Illustrated Dictionary of Aviation Copyright © 2005 by The McGraw-Hill Companies, Inc. All rights reserved

The astronomical position of objects in the sky.
Copyright © 1981-2019 by The Computer Language Company Inc. All Rights reserved. THIS DEFINITION IS FOR PERSONAL USE ONLY. All other reproduction is strictly prohibited without permission from the publisher.

Feedback
Flashcards & Bookmarks ?
Please log in or register to use Flashcards and Bookmarks. You can also log in with
Flashcards ?
My bookmarks ?
+ Add current page to bookmarks
Mentioned in ?
References in periodicals archive ?
By connecting the antenna, the OEM6[R] Family Firmware can receive the ephemeris parameters of the satellites.
Edge Computing-based Differential Positioning Method for BeiDou Navigation Satellite System
Updating ephemeris is necessary for meeting the requirements of Mars exploration.
Improving the Accuracy of the Martian Ephemeris Short-Term Prediction
To Bullard and many others, it was already clear when the ephemeris second became the SI second that atomic clocks represented the future of timekeeping.
A Historical Review of U.S. Contributions to the Atomic Redefinition of the SI Second in 1967
Before applying the RTS corrections to the GPS broadcast ephemeris, a coordinate transform from RAC to the Earth-centered Earth-fixed (ECEF) system is required as follows.
GA-ARMA Model for Predicting IGS RTS Corrections
"'Artless and abrupt?' Bemerkungen zur Ephemeris belli Troiani des Diktys von Kreta." Groningen Colloquia on the Novel III.
The ethical discourse of tragedy and (pseudo-)historiography
(The absence of Janus may not be an issue since it has never been visually observed to the best of my knowledge.) By the way, either moon can be manually plotted from ephemeris data for a given point in time by using what SkyTools calls "Sky Marks." Guide has a reputation for plotting solar system moons with extreme accuracy.
Observing minor moons: look for some of the solar system's more challenging objects
The system starts with an estimated shutter frequency ([f.sub.EST] = 1/[P.sub.p](t)) where Pp(t) is the spin-down corrected period of the pulsar at time (t) derived from the ephemeris. The shutter optical interrupter produces a signal (S.) on each rotation (i) of the disk that coincides with the mid-position of one of the four windows.
Synchronizing high-speed optical measurements with amateur equipment
The Ephemeris is not a book that will appeal to everyone's tastes, but has masterful artistic and literary qualities and will provide rich entertainment for readers who understand the references to classical and romantic literary eras.
The Ephemeris
These satellites transmit their predicted position (the broadcast ephemeris) to the users, which is known as a "navigation message".
Investigation into the rate of changes in Keplerian orbital elements for GPS satellites under solar storming/GPS palydovu orbitu Keplerio elementu kitimo del Saules audru itakos analize
It then combines this real-time information with ephemeris data, mapping, cellular base station and Wi-Fi access point location data and other cloud-based aiding information using the SiRFusion platform.
CSR Debuts an Indoor Location and Navigation Breakthrough with SiRFstarV(TM) Architecture and SiRFusion(TM) Platform
--Orbital errors (ephemeris errors)--errors caused due to satellites transmitting inaccurate orbit parameters;
Investigation of the effects of specific solar storming events on GNSS navigation systems/Charakteringu saules audru poveikio globalinei navigacinei palydovinei sistemai tyrimas