Ptolemaic system (tŏlˌəmāˈĭk), historically the most influential of the geocentric cosmological theories, i.e., theories that placed the earth motionless at the center of the universe with all celestial bodies revolving around it (see cosmology). The system is named for the Greco-Egyptian astronomer Ptolemy (fl. 2d cent. A.D.); it dominated astronomy until the advent of the heliocentric Copernican system in the 16th cent.

The Roots of the Ptolemaic System

The ancient philosophers imagined the universe to resemble a complex clockwork consisting of concentric crystalline spheres, nested inside one another, which carried the sun, moon, and planets in their motions and made the “music of the spheres” as they revolved. Professional astronomers did not claim that such a mechanism physically existed; rather, they treated it as the hypothetical basis for constructing geometrical schemes that would allow them to make accurate predictions of the motions and future positions of celestial bodies.

However, the motions of the planets against the stars are not uniform and circular but exhibit a host of irregularities. For a superior planet (Mars and those farther from the sun), the most important of these is the planet's retrograde motion at the time of opposition. The planet seems to halt and then reverse its motion for a few months, so that its complete circuit of the ecliptic is attended by a series of yearly loops or switchbacks.

The Fundamentals of the Ptolemaic System

Partly on aesthetic grounds and partly because no other hypothesis suggested itself, Ptolemy generally retained the semimystical Pythagorean belief that nothing but motion at constant speed in a perfect circle is worthy of a celestial body. He combined simple circular motions to explain the complicated wanderings of the planets against the background of the fixed stars. Ptolemy explained retrograde motion by assuming that each planet moved in a circle called an epicycle, whose center was in turn carried around the earth in a circular orbit called a deferent. Thus the motion of all the planets around the earth in the Ptolemaic system was somewhat similar to the motion that modern astronomy ascribes to the moon as it revolves around the earth while the earth itself is revolving around the sun. The fact that the inferior planets (Venus and Mercury) never stray far from the sun was explained by the provision that the centers of their epicycles always had to lie on the line connecting the earth and sun.

In the final version of his system Ptolemy modified the postulate of uniform motion in order to explain the variations in the apparent speeds of the planets. He found that these variations could be reproduced most conveniently by displacing the earth from the center of the deferent to a point called the eccentric. He then assumed that the motion of the center of the epicycle along the deferent appeared uniform, not from the center of the deferent or from the eccentric, but from a third point symmetrically displaced from the eccentric, called the equant. This modification was tantamount to abandoning the postulate of uniform motion. Ptolemy considered it more important to achieve a closer agreement with the observed astronomical data than to adhere to any preconceived first principles. His work thus anticipates the positivist spirit of modern empirical science, which makes no ontological claim for its constructs but merely asserts that nature behaves “as if” these constructs lay behind appearances.

When Earth was viewed as the stationary center of the universe, the retrograde motion of the planets was explained in terms of epicycles—smaller orbits that circled in the reverse direction from the planets’ usual motion.

an auxiliary circle in Ptolemy’s geocentric system of the world.

Epicycles were introduced to explain the retrograde motions of the planets. It was presumed that a planet moves uniformly along the epicycle while its center E (see Figure 1) moves along another circle, called the deferent, with its center at the earth. Because a deferent with one epicycle could not explain many irregularities in the motions of the planets, systems of epicycles were introduced. It was believed that the center of the second epicycle moved along the first epicycle, while the center of the third epicycle 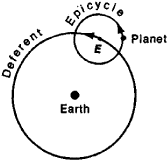 moved, in turn, along the second epicycle, and so on. The planet is located in the last epicycle.

[′ep·ə‚sī·kəl]
(mathematics)
The circle which generates an epicycloid or hypocycloid.
McGraw-Hill Dictionary of Scientific & Technical Terms, 6E, Copyright © 2003 by The McGraw-Hill Companies, Inc.

Feedback
Flashcards & Bookmarks ?
Please log in or register to use Flashcards and Bookmarks. You can also log in with
Flashcards ?
My bookmarks ?
+ Add current page to bookmarks
Mentioned in ?
References in periodicals archive ?
Keruvannya zminamy shvydkosti za dopomohoyu nepovnoyi dyferentsial'noyi peredachi cherez satelit [Speed Change Management Via Partial Epicyclic Gear Train Through Planets].
THE EFFICIENCY OF THE DIFFERENTIAL GEAR TO DEVICES FOR CONTROLLING THE SPEED CHANGE THROUGH A SUN GEAR
McFadden, "Window functions for the calculation of the time domain averages of the vibration of the individual planet gears and sun gear in an epicyclic gearbox," Journal of Vibration and Acoustics, vol.
A Study on Defect Identification of Planetary Gearbox under Large Speed Oscillation
Singh, "Epicyclic load sharing map: development and validation," Mechanism and Machine Theory, vol.
Analysis of dynamic behavior of multiple-stage planetary gear train used in wind driven generator
By way of comparison, a Pratt & Whitney GTF hub-mounted epicyclic gear box is shown in Fig.
Gears galore!
Then we have "epicyclic", which is an irregularity usually due to a static imbalance and no matter how fast you spin an object it will rotate in a small circle which moves around the circumference of a larger circle.
Bullet stability and barrel twist
By combining the load distribution principle of epicyclic gears with the simplified design of a parallel shaft gear, operating efficiencies of 99 per cent are possible.
Innovative power distribution gear
The topics include the evolution of the idea of abstract groups, Artin's theory of braids and the algebraization of topology, the mathematical structure of the eccentric and epicyclic models in ancient Greece and India, divisibility and primalty in Vedic literature, and paradoxes in hydrodynamics.
History of the mathematical sciences II
The mortars were prepared using an epicyclic revolving type small mechanical mixer.
Air content of self-consolidating concrete and its mortar phase including rice husk ash/Oro kiekis savitankiame betone ir jo skiedinio dalyje su ryziu lukstu pelenais
He created crisp transmission change with the invention of the epicyclic gearbox.
Why do we fail to cash in on genius?
Hence the pilgrims' regress towards the primal sinner via the descent of Geryon is re-encrypted in their epicyclic descent into actual hypocrisy."
Cartographic Dante