Equation of time | Article about equation of time by The Free Dictionary
https://encyclopedia2.thefreedictionary.com/equation+of+time
Printer Friendly

solar time, time defined by the position of the sun. The solar day is the time it takes for the sun to return to the same meridian in the sky. Local solar time is measured by a sundial. When the center of the sun is on an observer's meridian, the observer's local solar time is zero hours (noon). Because the earth moves with varying speed in its orbit at different times of the year and because the plane of the earth's equator is inclined to its orbital plane, the length of the solar day is different depending on the time of year. It is more convenient to define time in terms of the average of local solar time. Such time, called mean solar time, may be thought of as being measured relative to an imaginary sun (the mean sun) that lies in the earth's equatorial plane and about which the earth orbits with constant speed. Every mean solar day is of the same length. The difference between the local solar time and the mean solar time at a given location is known as the equation of time. Tables used by navigators list the equation of time for different times of year so that an observer can calculate his mean solar time from his local solar time (found by determining the sun's hour angle). Mean solar time is the basis for civil time and standard time.
The Columbia Electronic Encyclopedia™ Copyright © 2022, Columbia University Press. Licensed from Columbia University Press. All rights reserved.

The correction that must be applied to apparent solar time to obtain mean solar time, i.e. it is the difference in time as measured by a sundial and by a clock. The equation of time varies through the year; it has two maxima and two minima and is zero on four dates: April 15/16, June 14/15, Sept. 1/2, and Dec. 25/26. A positive value indicates that apparent time is ahead of mean time; the greatest positive value, which can be over 16 minutes, occurs in early Nov.; the greatest negative value, over 14 minutes, occurs in mid-Feb. The curve is the sum of two components, each reflecting a nonuniformity in the apparent motion of the Sun: one component arises from the ellipticity of the Earth's orbit, the other from the inclination of the ecliptic to the celestial equator (see mean Sun).
Collins Dictionary of Astronomy © Market House Books Ltd, 2006
The following article is from The Great Soviet Encyclopedia (1979). It might be outdated or ideologically biased.

The equation of time varies continuously. The variation is due to the fact that the passage of apparent solar time, as measured by the hour angle of the true sun, is nonuniform because of the nonuniformity of the earth’s orbital motion and the inclination of the ecliptic to the equator. Therefore, the equation of time is obtained by adding two waves of approximately sinusoidal shape and nearly equal amplitude (see Figure 1). One of the waves has an annual period; the other, a semiannual period. The equation of time is equal to zero four times a year—around Apr. 16, June 14, Sept. 1, and Dec. 25. Four times a year it attains the following largest absolute values: +14.3 min (around Feb. 12), –3.8 min (around May 15), +6.4 min (around July 27), and –16.4 min (around Nov. 4).

We can find the local mean solar time by using the equation of time if we know the apparent solar time, as determined from observations of the sun with, for example, a sundial. In this case, we use the following formula:

where m is the mean time, m0 is the apparent time, and η in is the equation of time.

Values of the equation of time for each day are given in astronomical almanacs and calendars. (See.) 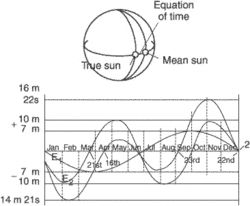 The amount of time by which the mean sun leads or lags behind the true sun at any instant. Its value is positive or negative, depending on whether the true sun is ahead of or behind the mean sun. Its value never exceeds 16¼ min. It is the correction applied to 12 h + local mean time to obtain the local hour angle of the sun.
An Illustrated Dictionary of Aviation Copyright © 2005 by The McGraw-Hill Companies, Inc. All rights reserved

Feedback
Flashcards & Bookmarks ?
Please log in or register to use Flashcards and Bookmarks. You can also log in with
Flashcards ?
My bookmarks ?
+ Add current page to bookmarks
Mentioned in ?
References in periodicals archive ?
Immediately below both sundials there are two different graphs from which the Equation of Time can be read off as function of date, see Fig.
The Swallow Park sundials
The second correction is from the equation of time that takes into account the various perturbations in the earth's orbit and the rate of rotation that affect the time, the sun appears to cross the observer's meridian.
SWOT analysis and power productivity estimation through solar radiation assessment
As the sun seems to slow, the equation of time takes over as the dominant factor in sunrise and sunset times.
Solar rhythms on offbeat path
Thankfully, people have already calculated this variation, and given us the Equation of Time, which tells you how many minutes you need to add or subtract on a certain day of the year.
Keeping A Sundial In Time With The Clock Requires Careful Calibration: Are You Prepared?
Don't dismiss Equation Despite being more than 20lb wrong on the ratings with some of the opposition, Equation Of Time shouldn't be dismissed lightly.
Flood expecting big run from Equation Of Time; Bluesquare.com Spring Cup 2.25 Lingfield 7f Listed C4/ATR Card page 62
A IT'S due to a phenomenon called the equation of time, which is the difference over the course of a year between time as read from a sundial and time as read from a clock.
Question Time
Newmarket David Milnes Equation Of Time (2.55 Wolverhampton, nap) Made no mistake on his second start for David Flood at Lingfield last month.
Celtus expected to show benefit of wind operation; TIPS BOX
As with all sundials of this type, don't forget to correct for the "equation of time" and for Seattle's slight distance from the Pacific Standard Time meridian.
Displaced dial
The correction that accounts for this--the difference between these two times, as much as 16 minutes--is called the equation of time. Shadows can generate graphs and tables of the equation of time for an entire year.
Sun follower
The difference between local noon and the moment when the Sun actually crosses the meridian is called the equation of time and is well known to anyone familiar with sundials.
What is an analemma?
If one were to photograph the Sun at local noon every day for a year, its path against the sky would be a drawn-out figure eight, owing to the changing solar declination and the equation of time. Giesen's Analemma applies that information to the plotting of a shadow from a gnomon of user-defined height.
Java applets for astronomy
Far more subtle is an east-west shift of the Sun's position, which gives rise to the so-called equation of time familiar to anyone who studies the workings of sundials.
Photographing the Analemma : Most people say you have to be nuts to attempt a year-long exposure of the Sun. Those who have succeeded will probably agree