To designate the position of a star, the astronomer considers an imaginary great circle passing through the celestial poles and through the star in question. This is the star's hour circle, analogous to a meridian of longitude on earth. The astronomer then measures the angle between the vernal equinox and the point where the hour circle intersects the celestial equator. This angle is called the star's right ascension and is measured in hours, minutes, and seconds rather than in the more familiar degrees, minutes, and seconds. (There are 360 degrees or 24 hours in a full circle.) The right ascension is always measured eastward from the vernal equinox. Next the observer measures along the star's hour circle the angle between the celestial equator and the position of the star. This angle is called the declination of the star and is measured in degrees, minutes, and seconds north or south of the celestial equator, analogous to latitude on the earth. Right ascension and declination together determine the location of a star on the celestial sphere. The right ascensions and declinations of many stars are listed in various reference tables published for astronomers and navigators. Because a star's position may change slightly (see proper motion and precession of the equinoxes), such tables must be revised at regular intervals. By definition, the vernal equinox is located at right ascension 0h and declination 0°. 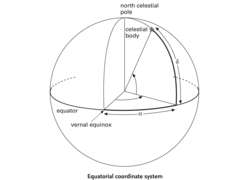 The most widely used astronomical coordinate system in which the fundamental reference circle is the celestial equator and the zero point is, strictly, a catalog equinox, or less formally the vernal (or dynamical) equinox. The coordinates are right ascension (α) and declination (δ), which are measured along directions equivalent to those of terrestrial longitude and latitude, respectively (see illustration). Sidereal hour angle is sometimes used instead of right ascension and north or south polar distance instead of declination. Because of the slow westerly drift of the dynamical equinox around the ecliptic the coordinates right ascension and declination are normally referred to the mean equator and equinox for a standard epoch, which in present use is 2000.0.
Collins Dictionary of Astronomy © Market House Books Ltd, 2006