atmosphere [Gr.,=sphere of air], the mixture of gases surrounding a celestial body with sufficient gravity to maintain it. Although some details about the atmospheres of other planets and satellites are known, only the earth's atmosphere has been well studied, the science of which is called meteorology.

Components and Characteristics of the Earth's Atmosphere

The first 40 to 50 mi (64–80 km) above the earth contains 99% of the total mass of the earth's atmosphere and is generally of a uniform composition, except for a high concentration of ozone, known as the ozone layer, at 12–30 mi (19–50 km). Calculated according to their relative volumes, the gaseous constituents of the atmosphere are nitrogen, 78.09%; oxygen, 20.95%; argon, 0.93%; carbon dioxide, 0.03%; and minute traces of neon, helium, methane, krypton, hydrogen, xenon, and ozone. The lower atmosphere contains varying amounts of water vapor, which determine its humidity. Condensation and sublimation within the atmosphere cause clouds or fog, and the resulting liquid water droplets or ice crystals may precipitate to the ground as rain, sleet, snow, hail, dew, or frost. The air also carries many kinds of dust, of meteoric as well as terrestrial origin, and microorganisms, pollen, salt particles, and various gaseous and solid impurities resulting from human activity (see pollution). Because of the pull of gravity the density of the atmosphere and the pressure exerted by air molecules are greatest near the earth's surface (about 1 gram per 103 cc and about 106 dynes per sq cm, respectively). The instrument used to measure air pressure is called a barometer. Air pressure decreases quickly with altitude, reaching one half of its sea-level value at about 18,000 ft (5,500 m).

Layers of the Earth's Atmosphere

The earth's atmosphere is composed of distinct layers. The troposphere extends upward from the earth to a height of about 5 mi (8.1 km) at the poles, to about 7 mi (11.3 km) in mid-latitudes, and to about 10 mi (16.1 km) at the equator. The air in the troposphere is in constant motion, with both horizontal and vertical air currents (see wind). Throughout the troposphere temperature decreases with altitude at an average rate of about 3.6℉ per 1,000 ft (2℃ per 305 m), reaching about −70℉ (−57℃) at its apex, the tropopause. Above the troposphere is an atmospheric ozone layer, which is also the lower layer of the stratosphere. Temperature changes little with altitude in the stratosphere, which extends upward to about 30 mi (50 km). Above this layer is the mesosphere which extends to about 50 mi (80 km above the earth); the temperature sharply decreases from around 20℉ (10℃) at the base of the mesosphere to −166℉ (−110℃) before it begins to rise at the top of the mesosphere. The next layer is the thermosphere, which extends upward from the mesosphere to about 400 mi (640 km); its temperature increases rapidly with altitude because of the absorption of shortwave radiation by ionization processes, although, because of the thinness of the air, little heat energy is available. The final layer is the exosphere, which gradually gets thinner as it reaches into the vacuum of space at around 435 mi (700 km) above the earth's surface; the atmosphere is so attenuated at this altitude that the average distance air molecules travel without colliding is equal to the radius of the earth. Although some gas molecules and particles out to about 40,000 mi (64,400 km) are trapped by the earth's gravitational and magnetic fields, the density of the atmosphere at an altitude of about 6,000 mi (9,700 km) is comparable to that of interplanetary space.

Certain layers of the atmosphere within the main regions exhibit characteristic properties. Aurorae (see aurora borealis), or northern and southern lights, appear in the thermosphere. The ionosphere is in the range (50–400 mi/80–640 km) that contains a high concentration of electrically charged particles (ions); these particles are responsible for reflecting radio signals important to telecommunications.

Role of the Earth's Atmosphere

The earth's atmosphere is the environment for most of its biological activity and exerts a considerable influence on the ocean and lake environment (see biosphere). Weather consists of the day-to-day fluctuations of environmental variables and includes the motion of wind and formation of weather systems such as hurricanes. Climate is the normal or long-term average state of the atmospheric environment (as determined in spans of about 50 years). The atmosphere protects earth's life forms from harmful radiation and cosmic debris. The ozone layer also protects the earth from the sun's harmful ultraviolet rays; seasonal “holes” in the ozone layer, the first detected above Antarctica and the Arctic in the 1980s, caused considerable alarm about the consequences of air pollution. Subsequently there has been increasing recognition of the role of air pollution and other aspects of human activity in global warming and climate change. Meteors strike the thermosphere and mesosphere and burn from the heat generated by air friction.

(eks -ŏ-sfeer) See atmospheric layers.
Collins Dictionary of Astronomy © Market House Books Ltd, 2006
The following article is from The Great Soviet Encyclopedia (1979). It might be outdated or ideologically biased.

The exosphere begins at altitudes of 450 to 800 km, and its upper boundary is several thousand km above the earth’s surface, where the concentration of particles is the same as in interplanetary space. The exosphere consists of ionized gases (plasma), and the ratio of charged particles to neutral particles is close to unity where it begins; in the upper half of the exosphere, the air is almost completely ionized. The lower and middle parts of the exosphere are composed mainly of O and N atoms; with increasing altitude, the relative concentration of light gases, especially ionized hydrogen, grows rapidly. The gas kinetic temperature of the exosphere, which increases somewhat with altitude, is 1500° to 3000° K. An increase in solar activity warms the exosphere and increases its thickness. The magnetic field of the earth, which has an intensity of 0.3 oersted in the lower part of the exosphere and 10–2 to 10–3 oersted at its upper boundary, strongly affects the physical processes within it. The radiation belts of the earth are located for the most part in the exosphere.

[′ek·sō‚sfir]
(meteorology)
An outermost region of the atmosphere, estimated at 300-600 miles (500-1000 kilometers), where the density is so low that the mean free path of particles depends upon their direction with respect to the local vertical, being greatest for upward-traveling particles. Also known as region of escape.
McGraw-Hill Dictionary of Scientific & Technical Terms, 6E, Copyright © 2003 by The McGraw-Hill Companies, Inc. 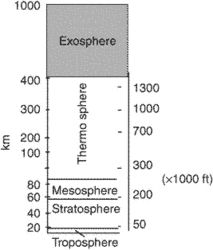 The upper part of the thermosphere. It is the topmost part of the atmosphere and is approximately 300 to 600 miles (500–1000 km) above the earth's surface. In this region, the atmosphere is extremely tenuous because of high temperature and low density; some of the atoms and molecules escape the earth's gravitational field.
An Illustrated Dictionary of Aviation Copyright © 2005 by The McGraw-Hill Companies, Inc. All rights reserved

Feedback
Flashcards & Bookmarks ?
Please log in or register to use Flashcards and Bookmarks. You can also log in with
Flashcards ?
My bookmarks ?
+ Add current page to bookmarks
Mentioned in ?
References in periodicals archive ?
The results, which provide new evidence about the origin of the lunar exosphere, are consistent with the idea that solar photon-driven processes dominate in supplying exosphere components.
How the moon gets its exospehere
Above starts the exosphere, where the atmosphere (mostly consisting of hydrogen atoms) thins out and merges with interplanetary space.
Global Scaling of Planetary Atmospheres
EXOSPHERE could bid to atone for his Royal Ascot flop in Thursday's Princess of Wales's at Newmarket.
Exosphere payback AFTERASCOT carnage
NEWSBOY'S 1-2-3 1 EXOSPHERE 2 DARTMOUTH 3 BEAUTIFUL ROMANCE EXOSPHERE looks exactly the right type to give Sir Michael Stoute an incredible 10th Hardwicke Stakes victory.
STOUTE'S EX FACTOR
The Queen's Dartmouth made all under Ryan Moore in the Ormonde Stakes last time and is another who would be inconvenienced if the race is tactical, but it is perhaps significant that Moore prefers Sir Michael Stoute's Exosphere, who is considered a big danger, this afternoon.
Churchill to show bulldog spirit against Frankel duo; WEEKEND WAGER
Sir Michael Stoute holds the answers to the Hardwicke Stakes (3.40pm) with Exosphere and Dartmouth both holding big chances of enhancing their trainer's superb record in the race.
D'Arcy's Spring Loaded for Wokingham victory
Transits also help us understand more about the planet's exosphere which is the thin layer of gases that makes up its atmosphere.
What's That Black Speck On The Sun?
Exosphere (17-2) continued Sir Michael Stoute's excellent run in the Group 2 Jockey Club Stakes.
Galileo Gold reaches for the stars with sparkling 2000 Guineas success at HQ; NEWMARKET CHANNEL 4 1.50-3.40
AYR: 1.25 Shawaahid, 2.00 Priceless, 2.35 Foxtrot Romeo, 3.10 Exosphere, 3.45 GOLDEN STEPS (NAP), 4.20 Finn Class, 4.55 Steel Train, 5.30 Entihaa.
TAKE GOLDEN STEPS; Chance to join top-class handicappers in the Cup
Mercury's extremely thin atmosphere, or exosphere, primarily is composed of oxygen, sodium, hydrogen, helium, and potassium.
Secrets from sun-scorched mercury: the planet's "extreme and dramatic orbital eccentricity, in combination with its rotation rate of three times in two of its years, causes some strange things to occur."
"From a technical perspective, the Grainster Exosphere is one of the largest cloud-based, custom application development projects of all-time."
Great Expectations; Conway startup Grainster's wildly optimistic projections