in biology, middle layer of tissue formed in the gastrula stage of the developing embryo. At the end of the blastula stage, cells of the embryo are arranged in the form of a hollow ball. Continued cell movement results in an invagination of the bottom region of the embryo, producing a form that resembles a double-layered cup. A third layer, the mesoderm, is formed between the other two by growth of cells derived from a marginal zone. The mesoderm is the germ layer that forms many muscles, the circulatory and excretory systems, and the dermis, skeleton, and other supportive and connective tissue. It also gives rise to the notochordnotochord
, in biology, supporting rod running most of the length of animals of the phylum Chordata and present at varying times in the life cycle. Composed of large cells packed within a firm connective tissue sheath, the notochord lies between the neural tube (spinal cord) and
..... Click the link for more information. , a supporting structure between the neural canal and the primitive gut. In many animals, including vertebrates, the mesoderm surrounds a cavity known as the coelomcoelom
, fluid-filled body cavity, found in animals, which is lined by cells derived from mesoderm tissue in the embryo, and which provides for free, lubricated motion of the viscera.
..... Click the link for more information. , the space that contains the viscera. See embryoembryo
, name for the developing young of an animal or plant. In its widest definition, the embryo is the young from the moment of fertilization until it has become structurally complete and able to survive as a separate organism.
..... Click the link for more information. .
The Columbia Electronic Encyclopedia™ Copyright © 2013, Columbia University Press. Licensed from Columbia University Press. All rights reserved. www.cc.columbia.edu/cu/cup/
The following article is from The Great Soviet Encyclopedia (1979). It might be outdated or ideologically biased.

mesoblast, in multicellular animals (except sponges and coelenterates), including man, the middle germ layer, found between the ectoderm (the outer germ layer) and the endoderm (the inner) as a result of gastrulation.

In protostomes (most invertebrates), the mesoderm is formed from teloblasts—large cells lying between the ectoderm and endoderm at the posterior end of the embryo that during gastrulation enter the primary body cavity, where they multiply and develop into two mesodermal bands. In most deuterostomes (echinoderms, brachiopods, chaetognaths, acranians, cyclostomes, fish, amphibians), the mesoderm is formed enterocoelically—that is, from separating portions of the wall of the primitive gut, or enteron. In other deuterostomes (reptiles, birds, and mammals), because of secondary changes in the process of germlayer individuation, the mesodermal rudiment becomes part of the primitive ectodermal layer during the blastula stage and later becomes a third germ layer, the mesoderm.

In flatworms and nemertines, the mesodermal bands give rise to the connective tissue that fills the spaces between the viscera. In annelids and arthropods, they divide into paired somites with a secondary body cavity, or coelom (see Figure 1). The longitudinal muscles of the body and the excretory organs develop from the walls of the coelom. The mesoderm develops more or less similarly in the various groups of vertebrates (see Figure 2). 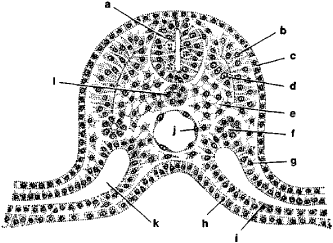 The rudimentary notochord develops in the dorsal part of the embryo. The mesoderm divides into metameric somites on both sides of the notochord. These somites are initially connected to nonsegmented ventral portions of the mesoderm, called lateral plates (splanchnotomes), by narrow segmented stalks, or nephrotomes. The wall of each somite then differentiates into sclerotomes, dermatomes, and myotomes. The sclerotomes form the axial skeleton and connective tissue; the dermatomes, the connective-tissue layer of the skin; and the myotomes, the skeletal musculature. The nephrotomes differentiate into the renal tubules of the primitive kidney (and later, in higher vertebrates, of the secondary kidney), and the ducts of the urogenital system.

The splanchnotomes divide into two layers, inner (visceral) and outer (parietal), and the coelom forms between them. The visceral layer adjoins the endoderm and gives rise to the smooth musculature of the intestine, to the blood vessels and blood cells, and to the lining of the body cavity. The parietal layer adjoins the integuments and lines the coelom. The genital ridges, rudiments of the gonads, arise in the epithelium of the splanchnotomes. The right and left lateral plates grow together over the intestine to form the mesentery.