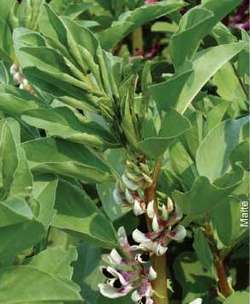 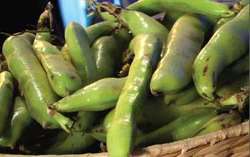 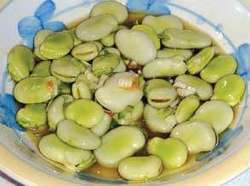 A legume member of the pea family with very large pods and beans. A very hardy plant that's easy to grow. Beans and leaves are edible. There have been times in history where all crops failed except beans, which kept the population from starvation. They have so much protein, they are called the meat of the poor. Highly nutritious and full of many essential nutrients required by the body. One of the main foods around the world for 5000 years, especially the mediterranean Greeks and Romans. Fava beans have the highest amount of L-dopa of any plant. L-dopa, a brain neurotransmitter, helps control hypertension and Parkinsons disease and stimulates the pituitary gland to produce Human Growth Hormone (HGH) -the most powerful anti aging substance known that keeps everything working smoothly in your body like when you were a teenager. HGH Improves athletic performance, strength, muscle mass. Fava beans help women with hormone issues, PMS, menopause. Since the pituitary gland controls the entire endocrine system, it also affects thyroid, sex hormones, adrenals (energy), immune system. Contains vitamin B17, known as the cancer-beating vitamin. Protects against malaria. Very high in fiber and oliosaccharides. Favas have potassium which helps maintain blood pressure and regulate the heart. Lots of vitamin A for healthy skin, good vision and bone development. Helps lower LDL- bad cholesterol. A small handful has TEN GRAMS of protein. Low fat content helps bodybuilders stay lean while gaining muscle. Want natural growth hormones? Eat Fava beans! Start easy to test one or two because a few unhealthy people might have a bad allergic reaction known as favism. I have a raw food fava bean recipe in my book Heal Yourself 101 that I eat all the time.
Edible Plant Guide © 2012 Markus Rothkranz

Feedback
Flashcards & Bookmarks ?
Please log in or register to use Flashcards and Bookmarks. You can also log in with
Flashcards ?
My bookmarks ?
+ Add current page to bookmarks
Mentioned in ?
References in periodicals archive ?
It was concluded that the traits showing preponderance of fixable component of variance should be more responsive to selection than the traits with non-fixable component of variance and accordingly the preferable breeding strategy for faba bean improvement has been suggested.
ANALYSIS OF GENE EFFECTS FOR YIELD AND YIELD COMPONENT TRAITS IN FABA BEAN (Vicia faba L.) GENOTYPES
It was shown that faba bean, as a legume, was better nodulated when intercropped than in monoculture and may have fixed more atmospheric N and take up more cations than anions and release H+ from the roots.
Is Strip Cropping an Effective Way for Maize Biofortyfication?
Root factors used for the other crops were 1.47 for both field pea and vetch, 1.52 for faba bean, 1.56 for lentil and 1.82 for chickpea (Unkovich et al.
Soil mineral nitrogen benefits derived from legumes and comparisons of the apparent recovery of legume or fertiliser nitrogen by wheat
Once our village was a major producer of faba bean, says farmer Yeshewalul Tilaye, from the Chichet village of Tarma Ber, but we lost hope.
Beans: A mighty tool in the fight for food security
The faba bean, Vicia faba, is among the oldest domesticated crops and is grown worldwide for food, feed, and forage.
Fabulous new faba beans now available
Effect of graded replacement of soybean meal by faba beans (Vicia faba L.) or field peas (Pisum sativum L.) in rations for laying hens on egg production and quality.
Feeding of dehulled-micronized faba bean (Vicia faba var. minor) as substitute for soybean meal in Guinea Fowl broilers: effect on productive performance and meat quality
In Mediterranean environments, faba beans and lupin seeds are potential alternative to soybean meal in organic breeding systems (Masoero et al., 2005; Facciolongo et al., 2014); moreover they are legumes suitable for rotation with winter wheat.
The Use of Faba Bean and Sweet Lupin Seeds Alone or in Combination for Growing Lambs. 1. Effects on Growth Performance, Carcass Traits, and Blood Parameters
Faba bean (Vicia faba L.) is an important pulse crop in Egyptian agriculture.
Investigations on faba beans, Vicia faba L. 37. Earliness and seed characteristics of F1 and F2 diallel crosses
The glycoside vicine that is found in the faba beans (Vicia faba L.) when administered intraperitoneally at relatively large amounts resulted in a rapid decrease in the concentration of blood GSH followed by death of the animals, where 400 mg/kg vicine was responsible for 80% mortality rate after 48 hours and no more deathes were observed in rats when administrated vicine for 7 days while 500 mg/kg vicine gives mortality rate of 100% during 7-day treatment [11].
Effect of the antibiotic neomycin on the toxicity of the glycoside vicine in rats
Similar results have been obtained [25] where they observed a significant improvement in IVPD of faba beans after a mild heat treatment.
Effects of processing on digestibility of selected common bean landraces grown in Uttarakhand (India)
[15.] Makker HPS, Becker K, Abel H and E Pawelzik Nutrient contents, rumen protein digestibility and antinutritional factors in some colour and white flowering cultivars of Vicia faba beans. J.
Evaluation of nutritional value and protein quality of raw and differentially processed sword bean [Canavalia gladiata (Jacq.) DC.] seeds
Faba beans (Vicia faba L.) is one of the important food legume crop widely used as human food in developing countries.
Comparative effect of Azotobacter, Mycorrhizal inoculum and nitrogen fertilizer on biochemical, growth and productivity aspects in Vicia faba l