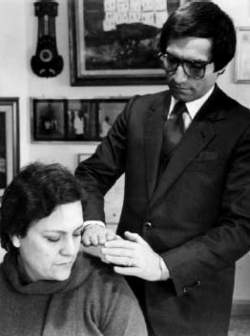 Faith healing is a general term usually applied to nonmedical cures. It implies that the subject has an expectation of being healed; he or she has faith and is imbued with the idea that the acceptance of certain beliefs or doctrines (sometimes religious) will precipitate a cure. The method of healing may be hands-on, spiritual, reflexology, Reiki, dietary, herbal, by prayers, meditation, hypnotherapy, or any of a number of methods.

In many societies, a shaman performs healing. In the third century BCE, King Pyrrhus of Epirus cured colic by the laying on of hands (though, to be accurate, he touched with his feet and toes, rather than with his hands). English kings, starting with Edward the Confessor in the eleventh century CE, cured the tubercular affliction of the glands of the neck, known as scrofula, by the laying on of hands. This cure for what became known as “the King’s Evil,” continued through the line of English monarchs until Queen Anne. In France, King Robert the Pius did similar curing of the sick in the eleventh century and it continued in that country for many years. The recipients of these healings all believed beyond any doubt that the monarch’s touch would cure them. It was, therefore, pure faith healing.

Feedback
Flashcards & Bookmarks ?
Please log in or register to use Flashcards and Bookmarks. You can also log in with
Flashcards ?
My bookmarks ?
+ Add current page to bookmarks
Mentioned in ?
References in periodicals archive ?
Waqas Ali, the victim, was brutally assaulted by the faith healer, who has been identified as Azmat Shah, along with his son and security guards.
Man 'beaten to death' for entering women's section of faith healer's 'aastana'
Instead of going to a hospital to have it operated on, I went to a female faith healer and psychic surgeon in Makati whom I had observed many times before, and whom I considered to be genuine.
Why psychic surgery may not be a complete sham
Studies regarding faith healers and their attendees are scarce in India although they are well received and respected by the community.
PREVALENCE OF PSYCHIATRIC DISORDERS AMONG FOLLOWERS VISITING FAITH HEALERS
"We have identified victims, we've entered the houses of these faith healers and we can track where their money's gone, but the problem is when we speak to the victims they don't want to come forward and be part of the evidence and that is restricting our ability in taking enforcement action."
'FAITH HEALERS' ESCAPE JUSTICE; VICTIMS TOO EMBARRASSED TO COME FORWARD
Last month, a 'faith healer' was arrested from Gujranwala for subjecting two minor girls to sexual assault.
FIA arrests 'fake pir'
We would be very worried about people relying on a faith healer instead of proper medical care.
'Dangerous' faith healer ripped my family apart, claims alleged victim; She said her family had been torn apart by so-called spiritual healer
No one questions the right of faith healers to believe in faith healing," Shaakirah Sanders, an associate professor of law at the University of Idaho, told Sottile.
Idaho Laws Lax In Preventing Child Deaths From Faith Healing
Religion is a significant factor that plays an important role in framing people's beliefs about mode of treatment, which results in acceptability of activities and practices suggested by faith healers. Edirne et.
Sociocultural Factors Influencing Infertile Couples to Consult Faith Healers in Southern Punjab
DERREN BROWN: MIRACLE Channel 4, 9pm HYPNOTIST, mind reader, master illusionist and now faith healer. Derren Brown, pictured, has got plenty of tricks up his sleeve, and even if you are a sceptic, you can't deny his shows are a thrill.
BEST OF THE REST
The author demonstrates that much of what faith healers teach is not supported by the Bible.
Faith Healers and the Bible: What Scripture Really Says
Mount, who joined the team last month, said there is no outright ban on the players to consult faith healers, but it is advised that he is consulted first.
Lanka warns players from consulting 'faith healers'
FAITH healers have kept a low profile since former England manager Glenn Hoddle's ill-fated attempt to add sprinkle to his team talks with a dash of hocus-pocus.
Jones loses way after dodging Parlour short cut; WICKETWHISPERS