A semicircular window, usually over a door with radiating bars suggesting an open fan. 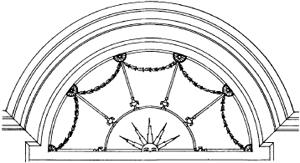 fanlight
1. A semicircular or semielliptical window over the opening of a door; commonly with radiating rods or bars suggestive of an open fan.
2. Any window occupying a similar position.
McGraw-Hill Dictionary of Architecture and Construction. Copyright © 2003 by McGraw-Hill Companies, Inc.

Feedback
Flashcards & Bookmarks ?
Please log in or register to use Flashcards and Bookmarks. You can also log in with
Flashcards ?
My bookmarks ?
+ Add current page to bookmarks
Mentioned in ?
References in periodicals archive ?
The living area looks towards a glazed door with fanlight above that leads to the conservatory/dining room.
Fit for a President
Mahogany panel doors lead into the airy drawing room and the dining room, both of which have floor to ceiling six-pane casement windows with fanlights above and shutters.
A gorgeous Georgian home near race course; This Georgian house in a sought-after Worcester square is one of finest in the city, writes Alison Jones
The windows hang on the wall, and the doors lean against it, like transparent John McCrackens--but not quite, for they show the traces of fanlights and panels, mail slots and locks, and look like doors, despite the inversions made in them by Whiteread's casting process.
Rachel Whiteread: Luhring Augustine
One householder said: "They swarmed through the fanlights and when the match was over they rushed back to the fanlights to get down.
Clamour to see big match; Fans forced their way on to roofs to get vantage point for Newcastle United's classic cup tie with Arsenal in February 1936
The distinctive covered entry to this stunning manor, flanked by twin turrets, leads to a gracious foyer with fanlights. The plan opens from the foyer to a formal dining room, a study and a step-down gathering room.
European Manor
The dignified faade is a fine architectural example of the Georgian craftsmanship and the entrance doors with stone pediments and fanlights add an elegant charm to the Leysbourne end of the High Street.
Rare opportunity for a Cotswold gem; Properties in the popular market town of Chipping Campden don't come around very often... Annie Roberts reports
There is, for example, a suggestion of something like radiance, rather as if the stylized, sub-Art Deco sunburst familiar from fanlights above the front doors of '30s suburban houses were rendered into a 3-D comic book drawing.
Phillip Allen: the approach. (London)
Exteriors of the 18th century and earlier 19th century achieved classic status for the lightness of touch - ranks of sash windows with the narrowest of glazing bars and neat, central entrances with porticos and fanlights.
SIMPLICITY . . . TO EXCESS; PROPERTY UPDATE Marsya Lennox looks at two fine Georgian properties that have recently come to the market
Today, the property has a fresh, colonial look from the outside with a wide, entrance veranda with classic columns, Georgian-inspired multi-paned windows and fanlights.
Residential Property: Leafy side of Henley-in-Arden