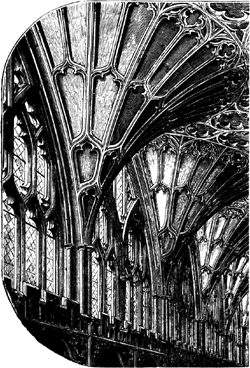 fan tracery
Tracery on the soffit of a vault whose ribs radiate like the ribs of a fan. (See illustration p. 390.)
McGraw-Hill Dictionary of Architecture and Construction. Copyright © 2003 by McGraw-Hill Companies, Inc.

Feedback
Flashcards & Bookmarks ?
Please log in or register to use Flashcards and Bookmarks. You can also log in with
Flashcards ?
My bookmarks ?
+ Add current page to bookmarks
Mentioned in ?
References in periodicals archive ?
WHO AND STAR TREK 196, 203 (1995)); Fiesler, supra note 105, at 5-6 (describing how fans identify as part of fandom communities and communicate with other fans by making fanworks such as fanfiction, fanart, and cosplay).
Belonging as intellectual creation
As a result, copyright theorists have been quite interested in fanworks as evidence of creative practices that exist without, and even in contradiction to, copyright's official incentive story.
In fanworks, the two of them can find each other for the first time an infinite number of times, in an infinite number of ways: they can meet as children; they can fall in love slowly over the course of the first five-year mission; they can have a torrid affair that ends badly; they can have a torrid affair that never ends.
If characters were unconstrained by "mortal law," then they could also be regarded as perpetually available through what Simon Stern has usefully termed an "economy of abundance." (61) Fanworks take this infinite extensibility to its logical conclusion.
(73) And because fanworks in their inception are based on the original, the ability to have more and more without erasing the original structures the entire enterprise.
Economies of desire: fair use and marketplace assumptions
literacy, and discussing fanwork in the context of educational
technological advances make it easier for fanworks and remix to draw
implicitly assume that fanworks involve a substantial amount of
Other owners have explicitly stated that some fanworks are fair
Using social norms to regulate fan fiction and remix culture
In a community where fanworks (art, narrative fiction, etc.) are acceptable and even privileged, the same criticisms are often borne out in creative rather than purely scholarly ways.
I turn again to "the Silmarillion" fandom on Tumblr, who, on the Saturday of this year's Mythcon (entirely coincidentally, as far as I could tell), "celebrated" through online venues a predetermined "Noldor Independence Day" by posting fanworks in various mediums that characterized the Noldor's defiance of the Valar and journey to Middle-earth as a bold and positive move away from a corrupt system of government, in defiance of the narrative in The Silmarillion that describes this as the Noldor's "folly" and as a kind of fall (Tolkien, The Silmarillion 92).
(3) Fanworks being the inclusive term for any fan-produced text regardless of medium, including fanfiction, music, art, etc., while fanfiction refers specifically to written texts.
J.R.R. Tolkien, Fanfiction, and "The Freedom of The Reader"