1. Engineering a person or device that feeds the working material into a system or machine
2. Geography a tributary channel, esp one that supplies a reservoir or canal with water
3. Transport
a. a road, service, etc., that links secondary areas to the main traffic network
b. (as modifier): a feeder bus
4. Electronics
a. a transmission line connecting an aerial to a transmitter or receiver
b. a power line for transmitting electrical power from a generating station to a distribution network
Collins Discovery Encyclopedia, 1st edition © HarperCollins Publishers 2005 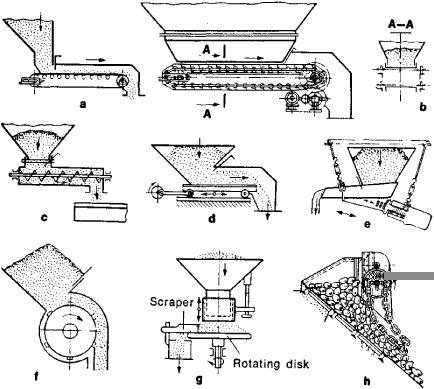 [′fēd·ər]
(electricity)
A transmission line used between a transmitter and an antenna.
A conductor, or several conductors, connecting generating stations, substations, or feeding points in an electric power distribution system.
A group of conductors in an interior wiring system which link a main distribution center with secondary or branch-circuit distribution centers.
(geology)
A small ore-bearing vein which merges with a larger one.
(hydrology)
tributary
(mechanical engineering)
A conveyor adapted to control the rate of delivery of bulk materials, packages, or objects, or a control device which separates or assembles objects.
A device for delivering materials to a processing unit.
(metallurgy)
A runner or riser so placed that it can feed molten metal to the contracting mass of the casting as it cools in its flask, therefore preventing formation of cavities or porous structure.
(ordnance)
A device that supplies ammunition to a weapon, usually actuated by an automatic or semiautomatic mechanism.
McGraw-Hill Dictionary of Scientific & Technical Terms, 6E, Copyright © 2003 by The McGraw-Hill Companies, Inc.