(also Seignette-electric), any of a group of crystalline dielectrics having in a certain temperature range spontaneous polarization, which varies significantly under the influence of external factors. The electrical properties of ferroelectrics are in many respects similar to the magnetic properties of ferromagnetics. Barium titanate, Rochelle salt (which has given its name to an entire group of crystals), triglycine sulfate, and potassium dihydrogen phosphate are among the most widely used and thoroughly investigated ferroelectrics (see Table 1 on page 86). Several hundred ferroelectrics are known.

Figure 1. Schematic representation of the unit cell of a pyroelectric. Arrows indicate the direction of the electric dipole moments.

and direction of spontaneous polarization can be changed quite easily by an electric field, a compressive stress, or a change in temperature. This susceptibility accounts for the great diversity in the effects observed in ferroelectrics. For other pyroelectrics, a change in the direction of polarization is difficult because it requires a radical rearrangement of the crystal structure (Figure 1). The electric fields required for such a rearrangement in pyroelectrics are much stronger than the breakdown fields. In contrast to other pyroelectrics, the spontaneous polarization of ferroelectrics is related to small displacements of ions with respect to the positions of the ions in the unpolarized crystal (Figure 2).

As a rule, ferroelectrics are not uniformly polarized. Rather, they consist of domains—regions with different directions of spontaneous polarization—such that in the absence of external factors the total electric dipole moment p of a specimen is practically equal to zero. (Figure 3 illustrates the cause of the formation of domains in an ideal crystal.) The electric field generated by the spontaneous polarization of one part of the specimen affects the polarization of another part so that the opposite polarization of these two parts is energetically more favorable. The equilibrium domain structure of a ferroelectric is determined by the balance between the decrease in the energy of electrostatic interaction of domains when the crystal is broken down into domains and the increase in energy arising from the formation of new domain walls having excess energy. The number of different domains and the relative orientation of the spontaneous polarization in the domains are determined by the crystal symmetry. The configuration of the domains depends on the dimensions and shape of the specimen; it is also affected by the distribution of crystal defects in the specimen, by internal stresses, and by the other inhomogeneities invariably present in real crystals.

The presence of domains greatly affects the properties of a ferroelectric. When an electric field is applied, the domain walls are displaced such that the domains favorably oriented with respect to this field are increased at the expense of the unfavorably oriented domains. The domain walls are usually “fixed” at defects and inhomogeneities in the crystal, and electric fields of sufficient magnitude are required to displace the walls through the specimen. In a strong field, the specimen is completely polarized with respect to the field and becomes a single domain specimen. When the field is removed, the specimen remains polarized for an extended period. A fairly strong electric field of opposite direction, called the coercive field, is needed for the total volumes of the domains of opposite sign to be comparable. In a strong field, a complete reversal of polarization of the specimen

occurs. The dependence of the polarization p of a specimen on the electric field strength E is nonlinear and has the form of a hysteresis loop. Figure 3. Interaction of the electric field E of one part of the specimen with the spontaneous polarization of another part

The value of the spontaneous polarization ps usually varies markedly with temperature near the phase transition. It disappears at the Curie temperature Tc through either a discontinuous change (first-order transition, as with barium titanate) or a continuous change (second-order transition, as with Rochelle salt). The permittivity ɛ, as well as certain constants pertaining to piezoelectricity and elasticity and certain other constants, experiences a strong temperature dependence in both the polarized and unpolarized phases. The sharp rise in ɛ as the Curie temperature is approached (Figure 4) is related to the increase in the susceptibility of the crystal with respect to the change in polarization, that is, with respect to the ion displacements that lead to a change in structure at the phase transition.

The polarization produced upon the transition of a ferroelectric to the polarized phase may be brought about either by ion displacement (displacive transition, as with barium titanate, Figure 2) or by the ordering of the electric dipoles from the unpolarized phase (order-disorder transition, as with potassium dihydrogen phosphate). In some ferroelectrics, spontaneous polarization may arise as a secondary effect, accompanying a rearrangement of crystal structure not directly connected with polarization. Such ferroelectrics, called improper ferroelectrics (gadolinium molybdate) have a number of peculiarities. For example, ɛ is only slightly dependent on T, and the value of ε is low at the Curie temperature.

In the region of the phase transition, changes in the phonon spectrum of the crystal are also observed. These changes are 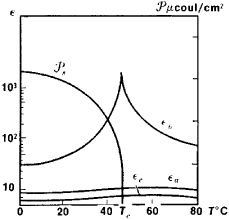 Figure 4. Dependence of P, and e on T for triglycine sulfate. Subscripts a, b, and c correspond to the three crystal axes. Spontaneous polarization arises along axis b.

more pronounced for displacive transitions. The frequency of one of the optical lattice vibrations decreases markedly as Tc is approached, especially when the phase transition is second-order.

Certain semiconductors and magnetically ordered substances have ferroelectric properties. A combination of different properties leads to new effects, such as a magnetoelectric effect. In certain dielectrics, spontaneous polarization does not arise upon a phase transition with a change in crystal structure, but dielectric anomalies, similar to the anomalies of ferroelectric transitions, are observed. There is an appreciable change in ɛ and double hysteresis loops. Such dielectrics are frequently called antiferroelectrics, although the observed properties generally are not related to the historical concepts of antiparallel dipole structures.

Ferroelectric materials (single crystals, ceramics, films) are widely used in technology and experimental work. By virtue of the large values of ɛ, they are used as a material in capacitors of high capacitance. The large values of the piezoelectric constants account for the use of ferroelectrics as piezoelectric materials in ultrasonic transmitters and receivers, in transducers converting sound waves into electrical signals and vice versa, and in pressure transducers. The abrupt change in resistance near the phase transition temperature in some ferroelectrics is utilized in posistors to monitor and measure temperature. The strong temperature dependence of spontaneous polarization (high value of the pyroelectric coefficient) permits the use of ferroelectrics in receivers of electromagnetic radiation of variable intensity over a broad range of wavelengths (from the visible to the decimillimeter). By virtue of the strong dependence of ɛ on the electric field, ferroelectrics are used in nonlinear capacitors (variconds), which have found application in automation, monitoring and control systems. The dependence of the refractive index on the electric field explains the use of ferroelectrics as electrooptical materials in instruments and devices for controlling beams of light, including devices for converting invisible infrared images into visible images. The use of ferroelectrics in, for example, computer memories, remote control devices, and devices for measuring temperature is promising.

A material that functions similarly to a ferromagnetic material in that it can be polarized into two states. Ferroelectric devices generally do not have any "ferrous" (iron) in them. See F-RAM and ferroelectric capacitor.
Copyright © 1981-2019 by The Computer Language Company Inc. All Rights reserved. THIS DEFINITION IS FOR PERSONAL USE ONLY. All other reproduction is strictly prohibited without permission from the publisher.